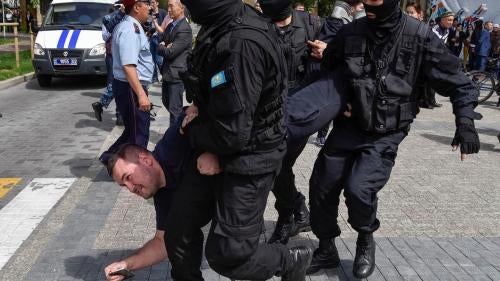 There was no meaningful improvement to Kazakhstan’s poor human rights record in 2018. Authorities did not allow peaceful protests that criticized government policies. Trade unions remained restricted from freely determining their structures. Despite government promises to amend the 2014 Trade Union Law, it remained unchanged. Some activists were released from prison, but politically motivated prosecutions continued. Rights activist Maks Bokaev remained incarcerated. A court banned an opposition movement as “extremist” and authorities targeted its supporters. Impunity for torture and ill-treatment in detention persisted. Free speech was suppressed, and independent journalists harassed or prosecuted for their work.

Maks Bokaev, who was imprisoned for peacefully protesting proposed land code amendments in May 2016, continued to serve a wrongful five-year sentence. In September, authorities transferred Bokaev to a prison in Aktobe, 1,000 kilometers closer to his home. In April, authorities released on parole Talgat Ayan, an activist jailed with Bokaev in 2016.

In June, Vadim Kuramshin, an activist imprisoned for extortion, became eligible for parole after a court shortened his 12-year sentence by three years. On August 17, he was released.

Authorities continued to misuse the vague and overbroad criminal charge of “inciting discord” against outspoken critics. According to the Prosecutor General’s Office, 57 people were charged with “inciting discord” in the first half of 2018. In March, authorities charged the Shymkent-based activist, Ardak Ashim, with “inciting discord” for her critical social media posts, and put her into court-sanctioned psychiatric detention. In May, a court ruled to excuse her from criminal liability and freed her. In April, police closed the criminal case against atheist writer Aleksandr Kharlamov, pending since 2013 on bogus charges of “inciting religious discord.” Kharlamov sued authorities for abuse during his forced detention in a psychiatric facility. On July 10, a court granted him compensation worth approximately US$2,700.

In July, authorities in Pavlodar opened a criminal investigation on charges of “disseminatining false information” against the human rights activist Elena Semenova, and placed her under house arrest. Semenova had earlier in July spoken to European Parliament members in Strasbourg about prison conditions. At time of writing, the investigation is ongoing. On October 8, authorities prevented Semenova from traveling to Strasbourg for a meeting with European officials. On October 9, assailants attacked her house with Molotov cockails.

In September, a court ruled to transfer Natalya Ulasik, a government critic whom a court had found to be mentally incompetent in October 2016, from forced psychiatric detention to “general regime” conditions, allowing her weekend home visitations.

In July, authorities charged Baurzhan Azanov, a lawyer, with “disseminating false information” after Azanov took up a high-profile case of a sexual assault on a seven-year-old child. Kazakhstan’s Ombudsman’s Office issued a statement expressing concern about the “legitimacy of initiating a criminal case against a lawyer in the exercise of his professional rights and obligations.” The case was dropped in October, on grounds that no crime had been committed.

Independent and opposition journalists continued to face harassment, arbitrary detention, and spurious criminal prosecutions. Authorities blocked websites, including social media. Between January and July, AdilSoz, a local media watchdog, recorded 18 detentions, arrests, convictions, or limits on freedoms of journalists. In March, a court denied parole to Aset Mataev, an imprisoned journalist, despite his eligibility after serving one-third of his six-year prison sentence. In April, problematic media and information law amendments entered into force.

In January, the Almaty City Prosecutor’s Office opened a criminal investigation on “disseminating false information,” into Forbes Kazakhstan and Ratel.kz, an analytical news portal, and interrogated journalists. In March, an Almaty court preliminarily approved blocking Ratel.kz and its affiliated websites. At time of writing, both cases were ongoing.

In March, a court banned the unregistered opposition movement Democratic Choice of Kazakhstan (DVK), finding the group’s activities “extremist.” Authorities increased harassment of perceived or actual DVK supporters. Between March and November, authorities opened criminal investigations or prosecuted at least 12 individuals for allegedly supporting or financing the DVK. Murat Tungishbaev, an activist wrongfully extradited from Kyrgyzstan in August, was charged in April with financing DVK. The investigation is ongoing. Tungishbaev is in pre-trial detention in Almaty. In August, Tungishbaev’s wife expressed concern that authorities were not providing Tungishbaev adequate medical treatment for his eye, which was operated on before his arrest.

Despite government claims to have zero-tolerance for torture, impunity for torture, and ill-treatment of prisoners and suspects remained the norm. Seven years after violent clashes brought an end to an extended oil sector labor strike in Zhanaozen, Kazakh authorities have failed to credibly investigate the torture allegations made by those subsequently detained and prosecuted.

In early 2018, Iskander Yerimbetov, the businessmen tied to Mukhtar Ablyazov, an exiled former banker and government critic, credibly alleged ill-treatment and torture in detention. After public outcry, including petitions by human rights groups to Kazakhstan’s prosecutor general, authorities opened a preliminary investigation. In March, the Almaty Prosecutor’s Office claimed they found no evidence of a crime and closed the case. In October, Yerimbetov was sentenced to seven years’ imprisonment on charges of large-scale fraud.

Authorities routinely deny permits for peaceful protests against government policies. Police break up even single-person unauthorized protests, and arbitrarily detain organizers and participants. On May 10, police detained dozens of people in cities across the country peacefully protesting against torture and politically motivated imprisonment. In June, a court in Taldikorgan sentenced a man to three days’ arrest for his unsanctioned protest against police abuse.

In September, parliament adopted government-proposed amendments to the religion law, which would increase restrictions and sanctions on religious teaching, proselytizing, and publications. At time of writing, the amendments were pending final adoption in parliament. Rights and religious groups expressed concern about the amendments.

In the first half of 2018, authorities brought 79 administrative cases against individuals or religious communities, leading to fines or short-term bans on worship, in violation of their right to freedom of religion or belief, according to the religious freedom watchdog Forum 18. Three other individuals were criminally convicted on charges of “organizing activities of a banned religious organization” and received three-year prison sentences.

Teimur Akhmedov, the Jehovah’s Witness imprisoned in May 2017, was released in April after a presidential pardon.

Authorities took no meaningful steps to restore freedom of association rights for independent trades unions in 2018. The Confederation of Independent Trade Unions of Kazakhstan (KNPRK) remained closed. In May, Nurbek Kushakbaev and Amin Eleusinov, trade union activists imprisoned in 2017 on politically motivated charges, were released on parole, but remained banned from trade union activities. Larisa Kharkova, the former KNPRK president, similarly remained banned from leading trade unions.The Ministry of Justice three times refused to register the Congress of Independent Trade Unions of Kazakhstan (formerly KNPRK). In September, authorities in Shymkent opened a criminal investigation on charges of embezzlement against trade union leader Erlan Baltabay. The investigation was ongoing at time of writing.

Kazakhstan’s labor rights record came under increased scrutiny in 2018. In May, a high-level tri-partite International Labour Organization (ILO) mission visited Kazakhstan. In June, the United States Trade Representative (USTR) considered a complaint against Kazakhstan filed by the American Federation of Labor and Congress of Industrial Organizations, which claimed that Kazakhstan was violating international labor rights standards, and urged the USTR to suspend trade benefits, the outcome of which was pending at time of writing. An International Trade Union Confederation complaint on Kazakhstan, submitted before the ILO in May 2017, remained pending at time of writing.

In March, Feminita, an Almaty-based lesbian, bisexual, and queer (LBQ) group, issued a report that documented abuses against LBQ women in Kazakhstan, including insults, humiliation, harassment, illegal dismissals, and forced resignations. In August, Zhanar Sekerbaeva, a Feminita co-chair, was charged with petty hooliganism after participating in a photoshoot aimed at destigmatizing menstruation, and fined.

In July, a court convicted an ethnic Kazakh Chinese citizen, Sayragul Sauytbai, a primary school teacher who spoke publicly about China’s abusive “political re-education” camps in Xinjiang, of illegal border crossing, but did not deport her to China. Sauytbai had fled China in early 2018. In October, Kazakhstan denied her asylum.

In January, President Nursultan Nazarbaev met US President Donald Trump in Washington. Public readouts of the meeting indicate there was no discussion of human rights by either president. In its 2017 annual human rights report, published in April, the US identified arbitrary arrest and detention, and restrictive trade union registration requirements among Kazakhstan’s notable human rights problems.

In December 2017, the European Parliament ratified the EU-Kazakhstan Enhanced Partnership and Cooperation Agreement, signed in December 2015, and called on Kazakhstan to end harassment of journalists, activists, trade union leaders, and human rights defenders, release those unfairly jailed, and revise its Trade Union Law and Labour Code.

The Extractive Industries Transparency Initiative, a coalition of governments, companies, and nongovernmental groups, granted Kazakhstan “meaningful progress” status in February, missing the opportunity to push for improvements in the restrictive space for civil society.