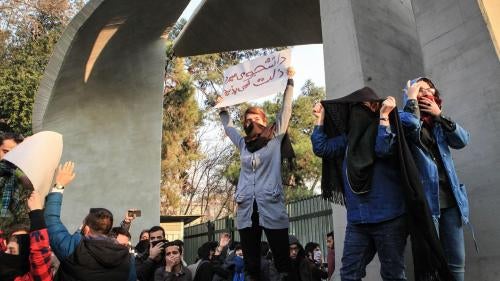 Iranians participated in numerous protests across the country amid deteriorating economic conditions, perceptions of systematic government corruption, and popular frustration over lack of political and social freedoms. Security forces and the judiciary have responded to these protests with arbitrary mass arrests and serious due process violations. While at least 30 people, including security forces, have been killed during the protests, officials have not conducted credible investigations into protesters’ deaths, or into security agencies’ use of excessive force to repress protests. Authorities have also tightened their grip on peaceful activism, detaining lawyers and human rights defenders who face charges that could lead to long jail terms.

Since protests first occurred in December 2017, authorities have systematically violated the right of citizens to peaceful assembly, arbitrarily arresting thousands of protesters. According to Alireza Rahimi, a parliamentarian, authorities arrested 4,900 people, including 150 university students, during the December and January protests. According to Iranian media, at least 21 people were killed during the December and January protests, including law enforcement agents.

On February 19 and 20, several media reported that clashes between security forces and protesters from the Dervish community, a Muslim minority group, had left several dozen Dervishes severely injured and four law enforcement agents dead, including three who were struck by a bus. On March 4, authorities informed the family of Mohammad Raji, one of those arrested, that he had died in custody. Authorities have refused to provide any explanation for Raji’s death and have threatened reprisals against his family if they speak publicly about it.

On March 18, after a rapid trial that concluded only a few weeks after his arrest and allegations of police torture, a court sentenced Mohammad Sallas, a Dervish member who was arrested during the clashes, to death for allegedly driving the bus that ran over and killed three officers. Authorities executed Sallas on June 18. Since May 2018, revolutionary courts have sentenced at least 208 members of the Dervish religious minority to prison terms and other punishments in trials that violate their basic rights.

On July 31, a new wave of anti-government protests began in the city of Esfahan and quickly spread to other cities, including Karaj in Alborz province, and Tehran, the capital. Since August 3, authorities have detained more than 50 men and women they arrested during the protests and held them in Fashafuyeh and Qarchack prisons in Tehran.

On April 30, 2018, the prosecutor of the second branch of Tehran’s Culture and Media Court ordered all internet service providers to block access to the popular messaging application of Telegram, which has more than 40 million Iranians users. Authorities had temporarily blocked Telegram during the January protests. Facebook and Twitter remain blocked, along with hundreds of other websites.

The decrease in number is largely due to an amendment to Iran’s drug law that went into force in November 2017. Since November 2017, the judiciary has halted most executions of individuals convicted of drug offenses in order to review their cases in accordance with an amendment to Iran’s drug law that raised the bar for imposing mandatory death sentences. On January 15, Hassan Norouzi, the parliamentary judicial spokesperson, told domestic media that authorities are reviewing some 15,000 cases as part of this process. However, rights organizations have since documented four executions related to drug offenses and armed robbery.

On September 8, authorities executed Zanyar and Loghman Moradi, and Ramin Hossein Panahi, three Kurdish men convicted in unfair trials of participating in armed struggle against the government. Their executions took place despite serious allegations of torture and due process violations and on the same day that Iranian forces carried out an attack on the headquarters of the Kurdistan Democratic Party-Iran and the Democratic Party of Iranian Kurdistan, two opposition groups in the town of Koya, in northern Iraq.

Iranian law considers acts such as “insulting the prophet,” “apostasy,” same-sex relations, adultery, and certain non-violent drug-related offenses as crimes punishable by death. The law also prescribes the inhumane punishment of flogging for more than 100 offenses, including drinking alcoholic beverages and extramarital sex, which are prohibited in Iran.

On February 10, the family of Kavous Seyed Emami, a well-known Iranian-Canadian environmentalist and professor also arrested, reported that he had died in detention in unknown circumstances. Authorities claimed Seyed Emami committed suicide, but they have not conducted an impartial investigation into his death. They have also placed a travel ban on Seyed Emami’s wife, Maryam Mombeini.

Since 2014, the IRGC Intelligence Organization has arrested at least 14 dual and foreign nationals who authorities allegedly perceived to have links with western academic, economic, and cultural institutions. They remain behind bars on vague charges such as “cooperating with a hostile state,” deprived of due process, and routinely subjected to pro-government media smear campaigns.

In the first days of September, authorities also arrested Hoda Amid and Najmeh Vahedi, two women’s rights defenders who teach workshops for women on realizing equal rights in marriage, at their homes in Tehran.

Due Process Rights and Treatment of Prisoners

Iranian courts, and particularly the revolutionary courts, regularly fell short of providing fair trials and used confessions likely obtained under torture as evidence in court. Authorities routinely restrict detainees’ access to legal counsel, particularly during the investigation period. In June, the judiciary reportedly restricted the right of legal representation for defendants facing national security crimes’ charges to a judiciary-approved list of just 20 lawyers who can represent them during the investigation phase in Tehran. The list includes no women or human rights lawyers.

Several individuals charged with national security crimes suffered from a lack of adequate access to medical care in detention. On August 31, the family of Arash Sadeghi, a 30-year-old human rights defender, reported that he had been diagnosed with a rare kind of cancer and is in urgent need of specialized care. Authorities reportedly allowed Sadeghi to undergo surgery at a hospital on September 13, but returned him to prison against his doctor’s medical advice.

Revolutionary courts handed down long prison sentences to at least 17 student activists arrested during the December and January protests.

Iranian women face discrimination in personal status matters related to marriage, divorce, inheritance, and child custody. Iranian women cannot pass on their nationality to their foreign-born spouses or their children like men. A married woman may not obtain a passport or travel outside the country without the written permission of her husband. Under the civil code, a husband is accorded the right to choose the place of living and can prevent his wife from having certain occupations if he deems them against “family values.”

In December 2017 and January 2018, several women took their headscarves off while standing on electric utility boxes across the country to protest Iran’s compulsory hijab law. Court have sentenced several of these women to imprisonment ranging from a few months to 20 years (18 years of which is suspended). Authorities have filed a complaint against Nasrin Sotoudeh for her work in defending Shaparak Shajarizadeh, a woman arrested for protesting these discriminatory laws.

In June, authorities opened Azadi stadium’s doors to women and men to watch a live screening of the last two games of Iran’s national football team at the 2018 World Cup. Despite authorities’ promise to allow women to watch the games however, women are still banned from attending several men’s sports tournaments, such as Iran’s football league matches.

Iranian law vaguely defines what constitutes acts against morality, and authorities have long censored art, music, and other forms of cultural expression, as well as prosecuted hundreds of people for such acts. These laws often disproportionally target women and sexual minorities. On July 9, Iranian state television broadcasted several women’s apologies briefly detained in May for posting videos of themselves dancing on their popular Instagram accounts.

Iranian law denies freedom of religion to Baha’is and discriminates against them. At least 79 Baha’is were held in Iran’s prisons as of November 2018. Iranian authorities also systematically refuse to allow Baha’is to register at public universities because of their faith.

The government also discriminates against other religious minorities, including Sunni Muslims, and restricts cultural and political activities among the country’s Azeri, Kurdish, Arab, and Baluch ethnic minorities.

According to Article 18, an Iranian NGO, as of September 30, Iran has sentenced 37 Christians who converted from Muslim backgrounds to imprisonment for “missionary work.”

On July 21, after a long legal and legislative battle between Iran’s Guardian Council and the parliament, Sepanta Niknam, a Zoroastrian member of the Yazd City Council whose membership had been suspended because of his religion, was reinstated as a councilor.

In 2018, Human Rights Watch and the Center for Human Rights in Iran documented how people with disabilities face stigma, discrimination, and lack of accessibility when accessing social services, healthcare, and public transportation. People with disabilities may receive medical treatment, including electroshock therapy, without their informed consent. In March, parliament passed a disability law that increases disability pensions and insurance coverage of disability-related healthcare services but does not explicitly prohibit discrimination against persons with disabilities. Under election law, people who are blind or deaf may not run for parliament.

Iran continues to provide the Syrian government with military assistance and plays an influential role alongside Russia and Turkey in the Syria negotiations currently taking place in Astana, Kazakhstan.

On May 8, President Donald Trump announced the US withdrawal from the nuclear agreement signed in 2015 between Iran and the five permanent members of the United Nations Security Council, plus Germany and the European Union. The US has re-imposed several sanctions that had been lifted as a result of the agreement. President Trump sharply criticized Iran and the nuclear deal during a UN Security Council summit meeting on nonproliferation in September, although other council members defended the deal, including France, Britain, Russia, China, and the Netherlands.

On October 3, the International Court of Justice ordered a provisional measure in a complaint made by Iran that the United States must remove any obstacles arising from its economic sanctions to “the free exportation to the territory of the Islamic Republic of Iran of medicines and medical devices; foodstuffs and agricultural commodities; and spare parts, equipment and associated services necessary for the safety of civil aviation.” After the ruling, the US announced that it would withdraw from the 1955 Treaty of Amity, Economic Relations, and Consular Rights, which Iran used to file the complaint.