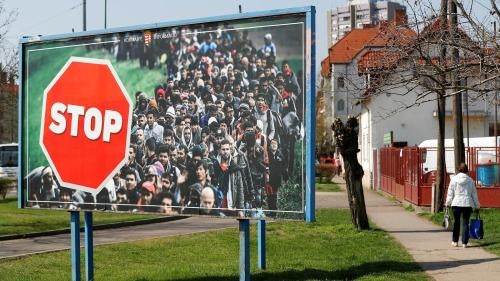 Hungary’s ruling party Fidesz and its Prime Minister Viktor Orban won a third consecutive term with a two-thirds majority in elections in April.

Ahead of the April elections, the government ran a smear campaign on TV, radio, and country-wide billboards targeting civil society organizations working on asylum and migration, and Hungarian-born philanthropist George Soros, a key funder.

In addition to the smear campaign, which continued after the elections in pro-government media, civil society organizations, particularly those working on asylum and migration, came under increasing government pressure in 2018.

In June, parliament approved government-proposed amendments to the constitution and other legislation, criminalizing services, advice, and support to migrants and asylum seekers, punishable by up to one-year imprisonment. The measures came into force in July. At time of writing, no prosecutions had taken place. The measures were adopted despite criticism from the Council of Europe commissioner for human rights in February, the UN Human Rights Committee in April, UNHCR in May, and the Council of Europe’s constitutional advisory body in June.

In August, a special 25 percent tax on funding to organizations “supporting immigration” was introduced, exempting only political parties and international organizations with immunity.

No agreement was reached between Central European University and the Hungarian government to secure the university’s operations in Hungary, prompting the university in December to announce that it is moving to Vienna, Austria.

The country saw a significant decline in asylum applications in 2018 in large part because it became almost impossible for asylum seekers to enter the country to seek protection.

In July, a constitutional amendment entered into force further restricting access to asylum by explicitly banning the “settlement of foreign populations” in Hungary and refusing protection to any asylum seekers arriving in Hungary via any transit country that Hungarian authorities deem safe for asylum seekers. By August, a total of 3,119 people filed for asylum, and authorities granted international protection to a total of 320 people, of whom 54 received refugee status and 266 received subsidiary protection.

Roma continued to face discrimination in housing, education, and public health care. The July constitutional amendment criminalized homelessness, ignoring criticism in June by the UN special rapporteur on the right to adequate housing that the plan was cruel and incompatible with human rights law. Homeless people were prosecuted after the law entered into force in October.