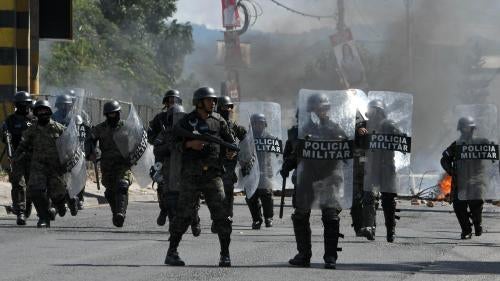 Violent crime is rampant in Honduras. Despite a downward trend in recent years, the murder rate remains among the highest in the world. A crackdown on protests following the November 2017 national elections resulted in the death of at least 22 civilians and one police officer, and in more than 1,300 detentions. Journalists, environmental activists, and lesbian, gay, bisexual, and transgender (LGBT) individuals are vulnerable to violence. Efforts to reform the institutions responsible for providing public security have made little progress. Marred by corruption and abuse, the judiciary and police remain largely ineffective. Impunity for crime and human rights abuses is the norm.

The Mission to Support the Fight against Corruption and Impunity in Honduras (MACCIH), established in 2016 through an agreement between the government and the Organization of American States (OAS), advanced investigations in a small number of cases regarding corruption by senior officials.

In January 2018, President Juan Orlando Hernández announced that the Special Commission for Police Reform Restructuring would extend its mandate through January 2019. As of April 2018, more than 5,000 of the more than 10,000 police officers evaluated by the commission had been removed, and in June, the commission presented the Attorney General’s Office with more than 1,300 case files of removed officers for further investigation into alleged criminal activities. However, the commission has been criticized for its opacity and came under fire in October 2018, when an officer whom the commission had promoted to deputy police commissioner, and who later became head of police, was arrested for illicit association and money laundering.

Eight former police officers faced prosecution or were convicted in the United States for involvement in organized crime.

Judges have faced interference from the executive branch and others, including private actors with connections in government. In June 2017, the former vice-president of the defunct Judiciary Council, Teodoro Bonilla, was found guilty of influence peddling.

In October 2018, the judiciary reinstated judges Tirza Flores Lanza and Guillermo López Lone. In 2015, the Inter-American Court on Human Rights determined that they had been fired arbitrarily after the 2009 coup in Honduras.

Following reports from both international observers and national actors of irregularities in the November 2017 national elections, protests erupted and authorities decreed a state of emergency, which the Office of the UN High Commissioner on Human Rights (OHCHR) and the Inter-American Commission on Human Rights (IACHR) criticized for its lack of compliance with international human rights standards.

According to the UN High Commissioner’s Office, at least 22 civilians were killed during the protests, of whom at least 16 were shot by security forces. A police officer was also killed after being hit by a Molotov cocktail filled with shrapnel. More than 1,300 people were detained, many of them in military detention centers. The UN High Commissioner’s Office documented “credible and consistent testimonies” that detainees had been subject to ill-treatment and said that security forces had indiscriminately opened fire on protesters on several occasions.

Journalists are targets of threats and violence. During the protests following Honduras’ elections, discussed above, the OHCHR documented physical attacks on at least six journalists, threats against journalists who were covering the protests, and the interruption of broadcasts critical of the government.

According to a 2016 report from the human rights ombudsman, CONADEH, 25 journalists were murdered between 2014 and 2016. Ninety-one percent of killings of journalists since 2001 remain unpunished.

In April 2018, Congress approved a preliminary version of a cybersecurity bill that would severely harm free speech by compelling companies providing internet services to censor content. At time of writing, the bill, which was criticized by the OAS’ special rapporteur for freedom of expression, faced another round of discussion and voting before it could become law.

In February 2017, Congress approved a new penal code making it a criminal offense—punishable by four to eight years in prison—for individuals or media outlets to engage in the “apology, glorification, [or] justification” of terrorism. The new code also contained a vague and broad definition of terrorism that could conceivably be used to bar peaceful protests and group meetings as terrorism. Following criticism from the OHCHR in Honduras and the IACHR, Congress repealed the provision on “apology, glorification, [or] justification” of terrorism in June 2018. But the broad definition of terrorism remained in force.

At time of writing, nine men had been charged with the murder in March 2016 of environmental and indigenous rights activist Berta Cáceres, including an army major and the president, as well as the former environment manager of Desarrollo Energético S.A. (DESA), the company behind the Agua Zarca dam project that Cáceres was campaigning against at the time of her assassination. When the trial against eight of the suspects started in September 2018, the Cáceres family lawyers filed legal appeals questioning the proceedings and seeking a new panel of judges. In October, the existing panel started the trial while the appeals remained pending.

Local activists criticized the Mechanism for the Protection of Journalists, Human Rights Defenders and Operators of Justice, created in 2015, for lacking uniform criteria in awarding protection measures. Activists also claimed the measures are not always effective.

Violence based on gender identity or sexual orientation is a major problem in Honduras. Several UN agencies working in Honduras have noted that violence against LGBT individuals forces them into “internal displacement” or to flee the country in search of international protection.

In August 2018, Honduran Congress approved several articles of a preliminary version of a new adoption law that would prohibit same-sex couples from adopting children. Final approval of the law remained pending at time of writing.

Under the criminal code, abortion is illegal without any exceptions in Honduras, and women and girls who terminate pregnancies can face prison sentences of up to six years. Emergency contraception is also prohibited. In May 2017, Congress voted against modifying the existing criminal code to allow abortion in cases of rape, grave risks to the life and health of the woman, or fetal complications incompatible with life outside the womb. The law that remains in force also sanctions abortion providers and those who assist with procedures.

In July 2017, the Honduran Congress unanimously passed a bill making all child marriage illegal. The new bill replaces legislation that previously allowed for girls to marry at 16 with permission from family. According to UNICEF, a third of Honduran girls marry before 18.

In May 2017, President Hernández created a commission to revise the criminal code to allow children as young 12 to be prosecuted as adults, rather than through the existing juvenile justice system, in violation of international standards. However, at time of writing no proposal had been put forward.

Inhumane conditions, including overcrowding, inadequate nutrition, and poor sanitation, are endemic in Honduran prisons. Designed to hold up to 10,600 inmates, the country’s penal institutions held almost 20,500 in August 2018, according to news reports.

The Mission to Support the Fight against Corruption and Impunity in Honduras (MACCIH), has been active in the country since April 2016. It has assisted in the creation of an anti-corruption jurisdiction in the country and in the approval of the Law on Clean Politics, which aims to prevent organized crime from contributing to political campaigns and hold parties and candidates accountable for financing their campaigns illegally. It also contributed to several anti-corruption investigations, together with the Attorney General’s Office.

Amongst these is a case regarding fraud in the country’s social security office (IHSS) for which, at time of writing, 14 people had been convicted—including the institute’s former director and three former deputy ministers. Five members of Congress of three different opposition parties were being investigated for the alleged embezzlement of HNL 8,3 million (US$ 345,000), as was a former first lady, for the alleged embezzlement of HLN 16 million (US$ 680,000).

However, in January 2018, a month after MACCIH and UFECIC indicted the members of Congress, the legislature passed legal reforms that established that the country’s court of auditors was the only entity allowed to audit public funds, effectively halting the investigation. In May 2018, the Constitutional Court ruled that although MACCIH was constitutional, elements of the anti-corruption prosecutorial unit (UFECIC) might not be, potentially undermining its work.

In February 2018, MACCIH head Juan Jiménez stepped down, citing a lack of support from the OAS secretary general. After the appointment of his replacement was held up for several months by the Honduran government, Luiz Antonio Guimarães Marrey started his work in June 2018.

In May 2018, the Committee on Enforced Disappearances recommended Honduras bring its legislation regarding disappearances in line with international law and improve search efforts, including for those who disappeared in the 1980s and 1990s.

For fiscal year 2018, US Congress allotted $67.85 million in bilateral aid to Honduras.