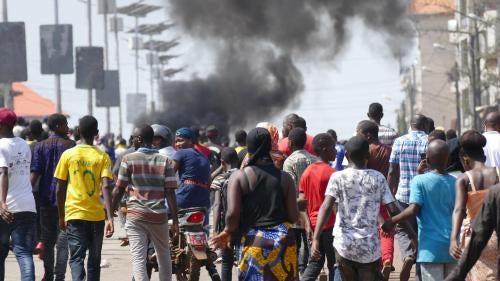 Guinea held long-delayed local elections in February 2018, but allegations of electoral fraud and ethnic and communal tensions led to deadly clashes between protesters and security forces. Popular frustration over economic inequality and the slow pace of economic development led to unrest, exemplified by often-violent protests against a fuel-price increase in July and long-running teachers’ strikes. The government regularly banned demonstrations led by opposition and civil society groups, while security forces often resorted to excessive force and engaged in criminality and extortion in seeking to disperse often violent street protests. Violations of freedom of expression, including the arrest of and attacks against journalists, persisted.
The judiciary made some progress toward delivering justice for the 2009 stadium massacre, but largely failed to investigate and prosecute other state-sponsored violence. The government took steps to reduce lengthy pretrial detention by transferring all criminal cases to first instance courts but concerns over prison overcrowding and corruption continued to undermine the credibility and effectiveness of Guinea’s justice system.
Guinea’s mining sector—a key driver of economic growth—continued to grow rapidly, but the population saw few dividends and a lack of effective government oversight denied communities adequate protection from the negative social and environmental impacts of mining.

Although the conduct of Guinea’s security forces, which have a decades-long history of human rights abuses and criminality, has improved in recent years, in 2018 the police and gendarmerie were still implicated in excessive force, corruption, and criminality.

Consistent with a 2015 law on public order, civilian institutions largely dictated the timing and location of security force deployments in response to 2018’s demonstrations, providing some civilian oversight of security forces’ role in policing.

Nevertheless, the security forces on numerous occasions used excessive lethal force against protesters. At least 12 people were shot dead in Conakry in 2018 by security forces during the often-violent protests that followed the disputed local elections and teachers’ strikes. In several cases, deaths were a result of police or gendarmes firing deliberately at protesters, while others were killed by stray bullets, according to witness accounts. Two members of the security forces were killed by protesters. When patrolling opposition neighborhoods during the February and March protests, some police and gendarmes also vandalized homes and vehicles and stole money, mobile phones, and cash.

Then-minister for citizenship and national unity, Gassama Diaby, promised that the alleged killings by security forces in the aftermath of the 2018 local elections would be investigated. The Ministry of Justice said in July 2018 that investigations had been opened, but no member of the security forces had, at time of writing, been charged or even disciplined.

In June 2018, security forces reportedly opened fire on protesters in the northern mining town of Siguiri, injuring at least 10 and killing 2. In November 2017, border clashes over territory between artisanal gold miners from northeast Guinea and southwest Mali resulted in at least six deaths.

Guinean and international human rights groups reported credible allegations of torture to intimidate or to obtain confessions from detainees in police and gendarme custody in Conakry, including, in several cases, against minors.

There was meaningful progress in the investigation of the September 28, 2009 stadium massacre, in which security forces killed over 150 peaceful opposition supporters, and raped dozens of women. In December 2017, the panel of Guinean judges investigating the massacre concluded over seven years of investigations. At least 13 suspects are indicted, including Moussa Dadis Camara, the then leader of the military junta that ruled Guinea in September 2009, and two high-ranking officials currently serving in the security forces. The investigation ended before judges had located and exhumed mass graves believed to contain more than 100 victims. However, the trial had yet to start at time of writing.

In April 2018, the Ministry of Justice created a steering committee to prepare for the trial by securing funding and ensuring adequate security for witnesses and magistrates. The committee, which includes key figures in the national justice system, United Nations representatives, and international donors, at time of writing had only met three times over a seven-month period, but had identified a location and budget for the trial.

Impunity largely continued for past human rights abuses committed by the security forces and government and opposition supporters.

A Conakry court in April 2018 began the trial of the former governor of Conakry, Sékou Resco Camara, and the former head of the army, Nouhou Thiam, for the 2010 torture of several detainees arrested for blocking a presidential motorcade. However, there has been little effort to investigate or prosecute other abuses dating back several years, including the dozens of people killed by security forces in street protests.

The trial of a police officer arrested in August 2016 for a shooting death during a protest began in December 2017, but the trial was quickly adjourned, and, for reasons unknown to Human Rights Watch, had yet to resume at time of writing. In the past year, there was little or no progress in prosecutions relating to the alleged killings of at least 10 people in the lead-up to the 2015 presidential poll, some 60 opposition supporters protesting the delay in holding parliamentary elections in 2013-2014, and more than 130 unarmed demonstrators in 2007.

In April, the Court of Justice for the Economic Community of West African States (ECOWAS Court) ruled against Guinea for the torture and death of Liberian refugee Jallah Morris while in custody of Guinean police in 2011, and for its failure to investigate and prosecute those responsible.

The judiciary continued to face various shortcomings, including lack of adequate court rooms and other physical infrastructure, as well as insufficient personnel to investigate and prosecute human rights violations and other crimes.

Guinean prisons and detention centers operate far below international standards, with severe overcrowding due to over-reliance on pretrial detention, weak case management, and the failure of the courts to sit regularly. Overcrowding and conditions in Guinea’s largest detention facility in Conakry, built for 300 detainees, continued to worsen. The facility at time of writing accommodated around 1,650.

The government frequently prohibited opposition and popular protests, citing risks to public security. Security forces were regularly deployed to deter protesters from assembling and often dispersed demonstrators by tear gas and water cannons. Civil society leaders filed a lawsuit challenging the banning of protests, which they said violated the right to freedom of assembly.

Threats to media freedoms, which have increased in the last several years, continued in 2018 with several journalists arrested and then released for coverage critical of the government, and several attacks against media institutions or journalists.

President Alpha Condé warned in November 2017 during a teachers’ strike that any media outlets offering coverage to union leaders would be shut down. Two days later, a regional governor reportedly shut down a radio station for interviewing a union leader, and two journalists were reportedly briefly detained and interrogated by police. A RFI correspondent’s accreditation was revoked by the press regulator on November 14 after he published an article describing allegations that soldiers were responsible for the November 7 killing of two protesters.

In January, 10 shots were fired outside the home of a journalist, who said he had received death threats for his work, including an article alleging security force involvement in the 2012 killing of the head of the treasury. In March, ruling party sympathizers in Conakry, angry at media coverage given to government critics, vandalized the offices of Hadafo Media (home of Espace TV and radio), throwing stones at the building and destroying cars. In June, an online journalist was arrested in Conakry on criminal defamation charges, detained for two weeks and released on conditional bail for publishing an article alleging that the Minister of Justice accepted bribes.

Guinea’s natural resources, notably gold, bauxite, and diamonds, were a major driver of economic growth. China, an increasingly close economic and political partner, signed in September 2017 a US$20 billion infrastructure for bauxite deal with Condé’s government. Inadequate supervision of mining’s environmental and human rights impacts, however, including in the booming bauxite sector, resulted in thousands of farmers losing their land to mining, often for inadequate compensation. Mining roads have significantly damaged water sources, reducing access to water and creating health consequences for villagers.

The European Union, France, and the United States remained major donors, including in the justice and security sector, and helped mediate between the government and opposition following the disputed February local elections.

The Office of the United Nations High Commissioner for Human Rights conducted training for the judiciary and security forces, but rarely publicly denounced human rights violations. UN Special Representative on Sexual Violence in Conflict Pramila Patten— whose office continued to support accountability for rapes and crimes committed during the 2009 stadium massacre—visited Guinea in March to encourage progress in the investigation. The International Criminal Court (ICC) also continued to play a significant positive role in promoting the September 28, 2009 investigation through its engagement with Guinean authorities.