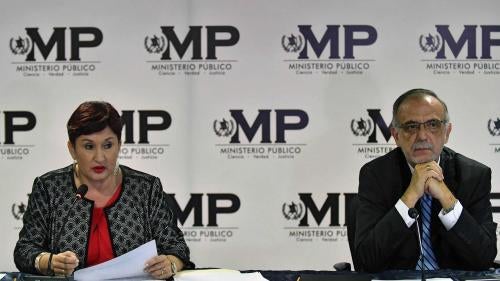 Progress in prosecuting corruption and abuse made in recent years is at risk due to serious obstruction from the government. This progress was the result of the collaboration of the Attorney General’s Office with the United Nations-backed International Commission against Impunity in Guatemala (CICIG), established in 2007 to investigate organized crime and reinforce local efforts to strengthen the rule of law. At time of writing, CICIG and the Attorney General’s Office were prosecuting more than a dozen current and former Congress members, as well as former President Otto Pérez Molina and former Vice-President Roxana Baldetti, who were arrested on corruption charges in 2015.

In August, President Jimmy Morales announced that he would not renew CICIG’s mandate when it expires in September 2019. In September, he prohibited CICIG Commissioner Velásquez from re-entering the country. At time of writing, the Constitutional Court had ordered that Velásquez should be allowed to return, but authorities indicated they would not comply with this order.

In August, the Guatemalan Congress approved in a preliminary vote a bill that contains provisions that would discriminate against lesbian, gay, bisexual, and transgender (LGBT) people and expand the criminalization of abortion. The bill remained pending in Congress at time of writing.

Violence and extortion by powerful criminal organizations remain serious problems in Guatemala. Gang-related violence is an important factor prompting people, including unaccompanied children and young adults, to leave the country.

Guatemala suffers from high levels of impunity, partly because criminal proceedings against powerful actors often suffer unreasonably long delays due to excessive use of motions by criminal defendants. Those delays are compounded by courts often failing to respect legally mandated time frames and sometimes taking months to reschedule suspended hearings. Intimidation against judges and prosecutors and corruption within the justice system continue to be problems.

Despite these obstacles, investigations by CICIG and the Attorney General’s Office have exposed more than 60 corruption schemes, implicating officials in all three branches of government, and prompting the resignation and arrest of the country’s then-president and vice-president in 2015, for their alleged participation in a scheme to defraud the customs authority by collecting bribes instead of customs duties.

Prosecutors also pressed charges against scores of officials—including more than a dozen current and former members of Congress from six different political parties—for hiring people in Congress who never performed any work for the institution (or already received a salary from another employer) and pocketing the wages for those “phantom jobs.”

In October 2018, former Vice-President Baldetti was sentenced to 15 years and six months in prison for her role in a scheme to defraud the state for US$18 million. At time of writing, other major corruption cases brought since 2015 were still in pretrial proceedings.

In May 2018, three former military officers were sentenced to 58 years each for the enforced disappearance of then 14-year old Marco Antonio Molina Theissen and the rape of his sister Emma in 1981. After Emma escaped from an army base where she was raped, officers went to her house and took away her younger brother in apparent retaliation. Among those convicted was Benedicto Lucas García, former top military officer and brother of former military dictator Romeo Lucas García. One officer was sentenced to 33 years for the rape.

The trial against former Guatemalan dictator Efraín Ríos Montt and a former soldier for their role in the 1982 Dos Erres massacre, in which Guatemalan army special forces killed around 200 civilians as part of their counterinsurgency policy during the armed conflict, had been scheduled for August 2018. It eventually started in October and was ongoing at time of writing. However, Ríos Montt died in April. In 2011 and 2012, five former members of the military were convicted for their roles in the massacre.

In May 2013, Ríos Montt was found guilty of genocide and crimes against humanity for the assassination of over 1,771 Mayan Ixil civilians in 105 massacres, when he was head of state in 1982 and 1983. He was sentenced to 80 years in prison, but 10 days later the Constitutional Court overturned the verdict on procedural grounds. The retrial began in March 2016 but was suspended two months later because of outstanding legal challenges. The trial restarted in October 2017 with just one session per week. Ríos Montt died before the trial concluded. In September 2018, the other defendant in the case, the former head of intelligence, was acquitted.

Journalists are targets of harassment and violence. In February 2018, the bodies of journalist Laurent Castillo and radio worker Luis de León were found bound with gunshot wounds to the head outside the town of Santo Domingo, in Guatemala's southwestern Suchitepéquez department. In June 2017, TV journalist Carlos Rodríguez survived a gunshot to the head. In June 2016, radio journalist Álvaro Aceituno was killed, and in March 2015, journalists Danilo López and Federico Salazar were assassinated. In January 2017, investigations by CICIG and the Attorney General’s Office implicated Congressman Julio Juárez from government party FCN-Nación in the latter crime. At time of writing, the case was in pretrial proceedings.

In March 2017, 41 adolescent girls were killed in a fire in the Hogar Seguro government-run shelter. Fifty-six girls had been locked up for the night in a space that could safely hold only 11, without access to water or a restroom, following a protest against the poor living conditions and treatment received in the shelter—including reports of sexual violence stretching back years. After at least six hours in those conditions, one of the girls set a mattress on fire so guards would open the door—but they didn’t. Three public officials were due to stand trial in February 2019 for involuntary manslaughter and breach of duty, among other charges. At time of writing, proceedings against nine others were ongoing.

Under current law, abortion is legal in Guatemala only when the life of a pregnant woman or girl is in danger. In August, Guatemalan Congress approved a preliminary version of the “Life and Family Protection” bill, which would expand the criminalization of abortion and could subject women who have miscarriages to prosecution. It would also raise the maximum sentence for abortion from 3 to 10 years and would make it a crime to engage in “the promotion of abortion,” which could mean that the provision of sexual and reproductive information, counseling, or referrals might result in sentences of up to 10 years. The bill needs to pass another round of votes, as well as an approval per article, before the president can sign it into law.

The proposed “Life and Family Protection” bill that was approved in a preliminary version in August also contains provisions that discriminate against LGBT people. It prohibits same-sex marriage and defines marriage as a union between people who were a man and a woman “by birth,” thus excluding many transgender people. The bill defines “sexual diversity” as “incompatible with the biological and genetic aspects of human beings.”

The bill also establishes that “freedom of conscience and expression” protect people from being “obliged to accept non-heterosexual conduct or practices as normal.” This provision could be interpreted to mean that people can be denied services on the basis of sexual orientation or gender identity, in violation of international human rights law.

The UN-backed CICIG plays a key role in assisting Guatemala’s justice system in prosecuting violent crime. CICIG works with the Attorney General’s Office, the police, and other government agencies to investigate, prosecute, and dismantle criminal organizations operating in the country. It is empowered to participate in criminal proceedings as a complementary prosecutor, to provide technical assistance, and to promote legislative reforms.

In August 2018, CICIG and the attorney general presented a renewed request to strip President Jimmy Morales of his presidential immunity in order to investigate his role in illicit campaign financing. Two weeks later, Morales, flanked by military and police officers, announced that he would not renew CICIG’s mandate when it expires in September 2019. The following week, he announced that he had prohibited CICIG Commissioner Iván Velásquez—who was on a work trip abroad—from re-entering the country.

Even though the Constitutional Court ordered that Velásquez be allowed to return, authorities refused, and in October 2018, the Foreign Ministry refused to receive the documents for the renewal of Velásquez’s visa. At time of writing, proceedings against the president and migration authorities for allegedly disobeying the Constitutional Court’s order were pending before the court. UN Secretary-General Antonio Guterres’ spokesman has said that Velásquez would continue to oversee CICIG’s work from outside Guatemala, adding that the move to block Velásquez from returning was inconsistent with the agreement to establish the commission.

The US Congress approved US$615 million in assistance for 2018 for the Plan of the Alliance for Prosperity in the Northern Triangle, a five-year initiative announced in 2014 that intends to reduce incentives to migrate from Guatemala, El Salvador, and Honduras by aiming to reduce violence, strengthen governance, and increase economic opportunity. Twenty-five percent of it is conditioned on the beneficiary countries taking steps to limit migration to the United States, and 50 percent on the US Department of State annually certifying progress by the beneficiary countries in strengthening institutions, fighting corruption and impunity, and protecting human rights.

In 2018, Guatemala received certification for continued full funding under the plan. The assistance for 2018 included $7 million for CICIG, but in May, a group of congressmen requested a hold on the disbursement of the outstanding $6 million following allegations of Russian influence with CICIG, even though the Department of State indicated that it had not found proof of those allegations. The hold was lifted in August.