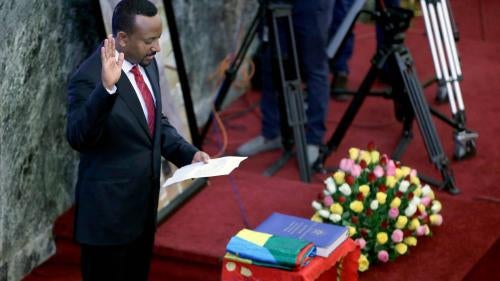 After years of widespread protests against government policies, and brutal security force repression, the human rights landscape transformed in 2018 after Abiy Ahmed became prime minister in April. The government lifted the state of emergency in June and released thousands of political prisoners from detention, including journalists and key opposition leaders such as Eskinder Nega and Merera Gudina. The government lifted restrictions on access to the internet, admitted that security forces relied on torture, committed to legal reforms of repressive laws and introduced numerous other reforms, paving the way for improved respect for human rights.

In July, Ethiopia and Eritrea resolved a decades-long stalemate, signed a peace agreement and agreed to implement the 2002 international boundary commission decision. Relations between the countries had been violent or frozen since their troops clashed in the border town of Badme in 1998.

Parliament lifted the ban on three opposition groups, Ginbot 7, Oromo Liberation Front (OLF), and Ogaden National Liberation Front (ONLF) in June. The government had used the proscription as a pretext for brutal crackdowns on opposition members, activists, and journalists suspected of affiliation with the groups. Many members of these and other groups are now returning to Ethiopia from exile.

With the ruling Ethiopian People’s Revolutionary Democratic Front (EPRDF)  controlling 100 percent of the seats in parliament, the institutional and legal impediments for sustained political space remain a challenge. Accountability for years of abuses, including torture and extrajudicial killings, and opening the space for political parties and civil society remain significant challenges for the new administration. There are indications that the reform process may ultimately be hindered by a lack of independent institutions to carry forward changes.

In September, security forces shot and killed five people during demonstrations in the capital Addis Ababa. Protestors criticized the government for not protecting citizens from forced displacement and ethnically-based attacks, particularly allegations of rape and killings in Oromia earlier in the month. Ongoing ethnic violence and internal displacement continue to put lives at risk. More than 2 million people are internally displaced due to intercommunal conflicts and violence, at times involving regional state and local security forces.

Ethiopia released journalists who had been wrongfully detained or convicted on politically motivated charges, including prominent writers such as Eskinder Nega and Woubshet Taye, after more than six years in jail. The federal Attorney General’s Office dropped all pending charges against bloggers, journalists and diaspora-based media organizations, including the Zone 9 bloggers, Ethiopian Satellite Television (ESAT), and Oromia Media Network (OMN), which had previously faced charges of violence inciting for criticizing the government.

OMN and ESAT television stations reopened in Addis Ababa in June, following calls by Prime Minister Abiy for diaspora-based television stations to return. Additionally, the government lifted obstructions to access to more than 250 websites. The restriction on access to the internet and mobile applications introduced during the 2015 protests was also lifted.

Many of Ethiopia’s repressive laws used to silence dissent and restrict citizens’ meaningful engagement—including the Charities and Societies Proclamation, the Media Law, and the Anti-Terrorism Proclamation—were being revised at time of writing.

Government officials often dismissed allegations of torture, contrary to credible evidence. But in a July speech to parliament, Abiy admitted that the government used torture and other unlawful techniques on suspects, acknowledging that such techniques amounted to terrorism by the state.

Earlier this year, Ethiopia closed Makaelawi detention center, known for torture and mistreatment of political prisoners. After media reported significant complaints of abuse from prisoners in other federal detention centers, the federal Attorney General’s Office dismissed administrators of five facilities in July but they did not face criminal charges. Many detention centers run by regional administrations, some well-known for ill-treatment, rape, torture, and lack of access to medical and legal aid, remain unaffected by the reform efforts.

In July, the federal attorney general told media that there would be investigations into torture and mistreatment in detention facilities. In November, a number of high-ranking security officials were arrested due to their alleged involvement in human rights abuses in detention, according to the attorney general. They had not yet been charged at time of writing.

The government did not take any steps to carry out investigations into the killings over 1,000 protesters by security forces during widespread protests in 2015 and 2016 in Oromia and other regions. Even though the legal and justice reform council under the Attorney General’s Office announced that judicial independence is a key area of reform, Human Rights Watch is not aware of any concrete steps taken at either the federal or regional level. Courts continue to implement political decisions of the executive branch.

In August, Mustapha Omer, an outspoken critic of Somali region’s authoritarian leadership, was appointed regional president in place of Abdi Mohamoud Omar, known as Abdi Illey, who presided over a regime of abuses, especially since 2007, when armed conflict escalated between the insurgent Ogaden National Liberation Front (ONLF) and Ethiopia’s Defense Force.

All sides committed war crimes between mid-2007 and early 2008, and the Ethiopian armed forces were responsible for crimes against humanity, including executions, torture, rape and forced displacement.

Ethiopian authorities created the Liyu (“special” in Amharic) police, which by 2008 had become a prominent counterinsurgency force reporting to Abdi Illey, regional security chief at the time, who went on to serve as the regional president for eight years. Liyu police continued to commit abuses in the region and, at times, killings in neighboring Oromia regional state.

Abdi Illey resigned and was arrested in August, two weeks after Liyu police and youth loyal to him attacked residents and burned property in the regional capital, Jijiga. He remains in government custody but has not been charged. Police head Abdirahman Abdillahi Burale (known as Abdirahman Labagole) resigned in August, but despite evidence of his involvement in committing human rights abuses, Abdirahman Labagole and other members of the Ethiopian army or Liyu police implicated in abuses against civilians have not faced any charges.

In Jail Ogden, a regional detention facility administered in part by Liyu police, prisoners were tortured, with no access to adequate medical care, family, lawyers, or even, at times, food. After the July publication of a Human Rights Watch report, many prisoners were released from Jail Ogaden. The prison was closed in August.

Ethiopia has over 2 million internally displaced people, including almost 1 million displaced in April and June due to inter-communal conflict between Guji and Gedio communities in Oromia and the Southern Nations, Nationalities and Peoples’ Region (SNNPR). In early August, at least 145,000 more people were displaced in Somali and Oromia regional states due to renewed fighting. In September, ethnic violence displaced an estimated 15,000 people from the outskirts of Addis Ababa. Despite signs of possible clashes, the government failed to prevent attacks, resulting in further displacement. Except for humanitarian aid, Human Rights Watch is not aware of sustainable federal government efforts to address internal displacement and inter-ethnic violence.

Ethiopia won international acclaim for its reform agenda this year and continues to enjoy strong support from foreign donors and most of its regional neighbors, due to its role as host of the African Union, its contributions to UN peacekeeping, regional counterterrorism efforts, and migration partnerships with Western countries.

In April, the US House of Representatives passed a resolution encouraging Ethiopia’s government to increase respect for human rights, rule of law, and democracy. The US maintained its support for Ethiopia and announced that it supports the ongoing reform efforts.

Despite its role as a member of both the UN Security Council and, until the end of 2018, the UN Human Rights Council, Ethiopia maintains its history of non-cooperation with UN mechanisms. Other than the UN special rapporteur on Eritrea, no special rapporteur has been permitted to visit since 2006. The rapporteurs on torture, freedom of opinion and expression, and peaceful assembly, among others, all have outstanding requests to visit the country.

Ethiopia has been inconsistent on human rights-related issues on a number of country situations on the Security Council. It failed to support a long-awaited arms embargo on South Sudan in July. And while voting in favor of a chemical weapons probe in Syria, Ethiopia did not support a March Security Council briefing by the high commissioner for human rights on the situation in Syria.