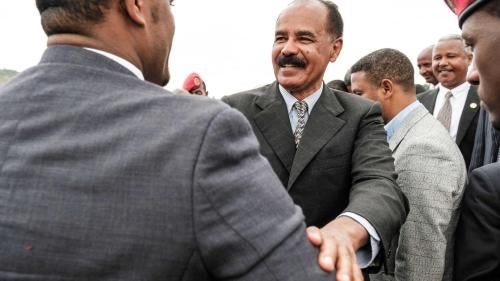 After decades of near total diplomatic isolation, 2018 was a year of significant change in Eritrea’s relationship with its neighbors. In July, the leaders of Eritrea and Ethiopia signed a five-point declaration to usher in “a new era of peace and friendship,” formally ending a border war that began 20 years earlier.  A month later, Eritrea and Somalia resumed diplomatic relations after 15 years, and Djibouti and Eritrea did the same shortly after. In November, the United Nations Security Council lifted its nine-year arms embargo against Eritrea. Despite these changes, there was no sign of Eritrea ending its severe repression of basic rights.

For two decades, President Isaias Afewerki used the absence of peace with Ethiopia to justify authoritarianism. Forced conscription into “national service” was prolonged indefinitely despite a decree limiting service to 18 months. Political opponents—anyone who questions Isaias’ rule—are jailed infinitely without trial, often incommunicado.  Independent media is prohibited, and journalists imprisoned. Political parties and nongovernmental organizations are also prohibited; elections, a legislature, and an independent judiciary are all not permitted because Isais argued they would weaken Eritrea’s defenses. Some religious groups are forbidden altogether, and others strictly regulated by government appointees. Implementation of a constitution approved by a constituent assembly in 1997, before the war, was deferred indefinitely.

The change in rapport with Ethiopia ended Isais’ many excuses for repressive policies but not, so far, the harshness of his rule. Two weeks before the Eritrea-Ethiopia declaration, the United Nations Human Rights Council lamented the government’s “systematic, widespread and gross human rights violations” committed “in a climate of generalized impunity.”  Among the abuses were “arbitrary detention, enforced disappearances, torture and sexual violence and forced labor,” as described in the latest report of the council’s special rapporteur on Eritrea. Symptomatic of the government’s approach to critics was its foreign minister’s diatribe that the rapporteur was “morally bankrupt” and “willfully distort[ed] reality” to further a “wicked agenda.”

By year’s end, conditions had not changed. Nevertheless, in October, the UN General Assembly elected Eritrea to the Human Rights Council.

The rights of all Eritrean citizens remain severely restricted, but younger generations conscripted into national service are especially impacted.  A UN commission of inquiry on human rights in Eritrea in 2016 characterized national service as “enslavement.” And despite its agreement with Ethiopia, the government has not released any long-term national service conscripts.

All 18-year-olds are conscripted into national service. They serve indefinitely, some as long as 18 years.  National service is not the sole reason thousands, including unaccompanied children, flee Eritrea each month but it remains a primary factor. Almost 15 percent of the population has fled since the 1998 war. After the Eritrea-Ethiopia border opened, the number of fleeing Eritreans, especially unaccompanied minors, increased significantly, according to the United Nations High Commissioner for Refugees (UNHCR).

Conscripts have long been subject to inhuman and degrading punishment, including torture, without recourse. Although pay was increased in recent years, it remains nominal and insufficient to support a family, especially as such increases are offset by higher deductions for food.

The Eritrean government uses the high school system to forcibly channel thousands of young people into national service, requiring them to spend their final year at the abusive Sawa military camp. Instead of developing a pool of well-trained and voluntary secondary school teachers, the government relies on national service conscripts, with little to no choice in their assignment and no end to their deployment in sight.

Decades of forced conscription have created a teaching corps lacking qualifications and motivation, severely impacting young Eritreans’ right to education. Because of inadequate pay and indefinite service, teachers are often absent from classes and many emigrate. Students are unmotivated by poor teaching and their belief that education has little benefit in the face of a future of endless forced national service.

Freedom of Speech, Expression, and Association

The government has not allowed the private press—destroyed in 2001 when 10 journalists were arrested and detained without trial indefinitely—to resume operations, nor has it permitted nongovernmental organizations.

The government neither released nor improved the conditions of its most prominent prisoners, government officials and reporters arrested in 2001 and incarcerated incommunicado ever since. Because of government secrecy and the absence of independent monitoring, it is impossible to determine how many political prisoners remain behind bars.

In March, the government released the body of the 90-year-old honorary president of a private Islamic school in Asmara, Al Diaa, jailed in October 2017 for protesting a planned government takeover of the school.  Thousands, including minors, were arrested as they marched through Asmara to attend his funeral. Most were released during the next three months, but some school leaders remain imprisoned at the time of writing.

Former finance minister and critic of the president, Berhane Abrehe, was arrested in September and his location remains unknown. Berhane had authored a book that detailed problems with Isais’s rule and calling on young people to rise against his regime. The government arrested Berhane’s wife, Almaz Habtemariam, in February and she has been held incommunicado ever since.

Security personnel continue to raid private homes where devotees of unrecognized religions meet for communal prayer. Repudiation of their religion is typically the price of release. In March, a newly married couple was arrested at a wedding-related ceremony.

Fifty-three Jehovah’s Witnesses remain in detention, including three arrested and sent to the Sawa military training camp in 1994. Prison conditions improved somewhat for them in 2017 when they were all transferred to the Mai Serwa prison. For a brief time there, they were allowed visitors for the first time since being incarcerated; in late 2018, however, visits were again barred.

Eritrean refugees faced the prospect of repatriation from some countries in light of improved relations with Ethiopia. While Ethiopia shut down Eritrean opposition outlets, it took no steps to expel the 164,000 Eritrean refugees in Ethiopia.

Israel calls Eritrean (and Sudanese) asylum seekers “infiltrators” and continually subjects them to harsh measures to pressure them to leave Israel “voluntarily.” In January, Israeli authorities said they would indefinitely detain thousands if they refused to leave for Rwanda or Uganda. In March, the Israeli High Court ruled the policy unlawful after the third-countries said they would refuse anyone deported from Israel. Israel’s justice minister warned repatriation would be likely if Eritrea “canceled” national service.

In September 2017, the United States announce it would repatriate about 700 Eritreans who were denied asylum. Some of them fled to Canada. One committed suicide at the Cairo airport while being repatriated.

In July, the Swiss Federal Administrative Court ruled that conditions in Eritrean national service were not so severe as to make deportation unlawful. The ruling came despite a 2017 report by the European Asylum Support Office that Eritreans returned involuntarily risked punishment, including imprisonment in inhumane conditions, forced labor, and torture.

Eritrea’s resumption of diplomatic relations with Ethiopia and Somalia led both countries to support lifting the UN arms embargo, originally instituted in response to Eritrean support of Al-Shabab and Eritrea’s aggression against Djibouti.  Djibouti later concurred with lifting sanctions, but reluctantly, because the border with Eritrea remains unsettled and Eritrea has not accounted for missing Djibouti prisoners-of-war.

The United Arab Emirates, which played a role in back-channel negotiations between Eritrea and Ethiopia, and which rents a military base near Eritrea’s port of Assab that it uses in the Yemeni civil war, announced an agreement with Ethiopia to build an oil pipeline linking Assab with Ethiopia’s capital.  Russia in September announced plans to build a “logistics center” at an Eritrean port but gave no details about the project.

US Deputy Assistant Secretary for African Affairs Ambassador Donald Yamamoto visited Eritrea in April. Despite the visit and the rapprochement with Ethiopia, Eritrea continued to detain three Eritrean staff of the United States Embassy imprisoned since 2001.

Chinese firms maintain significant investments in Eritrea’s mining sector. The mines are required to use government-owned construction firms for infrastructure development and thereby indirectly profit from conscript labor. One mine, at Bisha, was long majority-owned by Canada’s Nevsun Mining. In September, Nevsun agreed to a buyout by China’s Zijin Mining Group Company. The sale cleared regulatory hurdles in Canada and China in November.