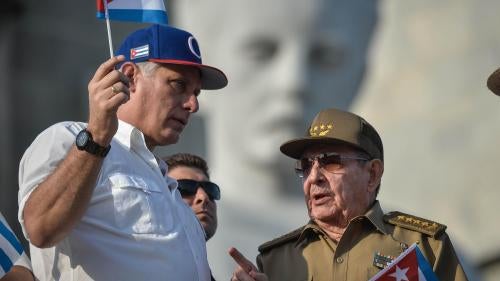 The Cuban government continues to repress and punish dissent and public criticism. The number of short-term arbitrary arrests of human rights defenders, independent journalists, and others was significantly less in 2018 than in 2017, but still remained high, with more than 2,000 reports of arbitrary detentions between January and August. The government continues to use other repressive tactics, including beatings, public shaming, travel restrictions, and termination of employment against critics.

On April 19, Cuba inaugurated a new president, Miguel Díaz-Canel, who took over from Raúl Castro. Castro remained as the leader of the Communist Party and retained his seat in the National Assembly.

On July 22, the National Assembly unanimously approved a proposal for a new constitution, to be voted on in a national referendum on February 24, 2019. The new constitution, which would replace one adopted in 1976, would eliminate the objective of “achieving a Communist society” but retain the assertion that the Communist Party is the “superior leading force of society and the State.”

The Cuban government continues to employ arbitrary detention to harass and intimidate critics, independent activists, political opponents, and others. The number of arbitrary short-term detentions, which increased dramatically between 2010 and 2016—from a monthly average of 172 incidents to 827—started to drop in 2017, according to the Cuban Commission for Human Rights and National Reconciliation, an independent human rights group that the government considers illegal.

The number of reports of arbitrary detentions continued to drop in 2018, with 2,024 from January through August, a decrease of 45 percent compared to the 3,706 reports during the same period in 2017.

Security officers rarely present arrest orders to justify detaining critics. In some cases, detainees are released after receiving official warnings, which prosecutors can use in subsequent criminal trials to show a pattern of “delinquent” behavior.

Detention is often used preemptively to prevent people from participating in peaceful marches or meetings to discuss politics. Detainees are often beaten, threatened, and held incommunicado for hours or days. Police or state security agents routinely harass, rough up, and detain members of the Ladies in White (Damas de Blanco)—a group founded by the wives, mothers, and daughters of political prisoners—before or after they attend Sunday mass.

In March, a former political prisoner, Ivan Hernández Carrillo, reported having been violently beaten and detained when he intervened to stop the arrest of his mother, Asunción Carrillo, a Ladies in White member, who was leaving her home to attend mass. Hernández said he was charged—after shouting “Down with Raul Castro!”—and fined for “contempt for the figure of the maximum leader.” The Carrillos were released the same day.

On August 3, dissident José Daniel Ferrer, who founded the Patriotic Union of Cuba (UNPACU) in 2011—upon his release from eight years in prison—was arrested along with activist Ebert Hidalgo and charged with “attempted murder” when the car he was driving struck a Ministry of Interior official. Activists have said the charges are a farce and witnesses allege that the official threw himself in front of the car intentionally, only to get up and ride off on his motorcycle. Upon his release 12 days later, Hidalgo reported having been psychologically tortured and held in harsh conditions in a dark, dirty cell.

In September, dissident Arianna López Roque was briefly detained after burning a copy of the proposal for new constitution. According to Lopez, she was charged with public disorder, disobedience, resistance, and contempt and an official threatened with retaliating against her husband, who is currently imprisoned.

The government controls virtually all media outlets in Cuba and restricts access to outside information. A small number of independent journalists and bloggers manage to write articles for websites or blogs, or publish tweets. The government routinely blocks access within Cuba to these websites, and only a fraction of Cubans can read independent websites and blogs because of the high cost of, and limited access to, the internet. In September 2017, Cuba announced it would gradually extend home internet services.

Independent journalists who publish information considered critical of the government are subject to harassment, smear campaigns, raids on their homes and offices, confiscation of their working materials, and arbitrary arrests. The journalists are held incommunicado, as are artists and academics who demand greater freedoms. Desacato laws continue to be enforced against opponents.

On January 30, Iris Mariño García, a journalist for La Hora de Cuba, was criminally charged with engaging in journalism without authorization. The manager of the newspaper said a woman accused Mariño of interviewing her on the street and that when police interviewed Mariño they focused on the paper’s opinion surveys, showing the political motivation behind the arrest. Mariño was detained again when attempting to take a picture of a May 1 workers’ parade. Officers took her to a police station and interrogated her.

In July, Roberto de Jesús Quiñones, an independent journalist whose work is published on the news site Cubanet, was detained for 58 hours and held incommunicado. Police raided his home and confiscated computers, phones, and other goods.

In April 2018, President Díaz-Canel signed Decree 349, expected to enter into force in December 2018, establishing broad and vague restrictions on artistic expression. Under the regulation, artists cannot “provide artistic services” in public or private spaces without prior approval from the Ministry of Culture. Those who hire or make payments to artists for artistic services which lacked proper authorization are subject to sanctions, as are the artists themselves. The decree provides different sanctions, including fines, confiscation of materials, cancellation of artistic events and revocation of licenses. Local independent artists have been protesting the decree. On August 11, police detained and beat Luis Manuel Otero Alcántara and at least three other artists when trying to organize a concert to protest the decree, according to press reports.

In May 2018, the Cuban Commission for Human Rights reported that Cuba was holding 120 political prisoners, including more than 40 members of the Cuban Patriotic Union. The government denies independent human rights groups access to its prisons. The groups believe that additional political prisoners, whose cases they have been unable to document, remain locked up.

Cubans who criticize the government continue to face the threat of criminal prosecution. They do not benefit from due process guarantees, such as the right to fair and public hearings by a competent and impartial tribunal. In practice, courts are subordinate to the executive and legislative branches, denying meaningful judicial independence.

Dr. Eduardo Cardet Concepción, leader of the Christian Liberation Movement, remained in prison at time of writing. Cardet, who had been threatened with jail because of his support for the “One Cuban, One Vote” campaign, was sentenced to three years in prison on March 2017. As of August 2018, he was being held in solitary confinement, and denied visits and any contact with family members, even by phone. Authorities argued that family visits were not “contributing to his re-education.”

In May, Dr. Ruíz Urquiola, a former biology professor and an outspoken environmentalist, was sentenced to a year in prison for disrespecting a park ranger. During his imprisonment he went on a hunger strike. In July 2018, he was granted a conditional release for health reasons. In August 2018, he reported irregularities in the handling of his case, and the imposition of travel restrictions.

Since reforms in 2003 to travel regulations, many people who had previously been denied permission to travel have been able to do so, including human rights defenders and independent bloggers. The reforms, however, gave the government broad discretionary powers to restrict the right to travel on the grounds of “defense and national security” or “other reasons of public interest,” and authorities have repeatedly denied exit to people who express dissent.

In July 2018, Rene Gómez Manzano, a prominent dissident who has been imprisoned several times, was intercepted at the airport before boarding a plane to attend a human rights meeting in Montevideo. Agents informed him that he was not authorized to travel.

Prisons are overcrowded. Prisoners are forced to work 12-hour days and are punished if they do not meet production quotas, according to former political prisoners. Inmates have no effective complaint mechanism to seek redress for abuses. Those who criticize the government or engage in hunger strikes and other forms of protest often endure extended solitary confinement, beatings, and restrictions on family visits, and are denied medical care.

While the government allowed select members of the foreign press to conduct controlled visits to a handful of prisons in 2013, it continues to deny international human rights groups and independent Cuban organizations access to its prisons.

On August 9, Alejandro Pupo Echemendía died in police custody at Placetas, Villa Clara, while under investigation for a crime related to horse racing. Family members say his body showed signs of severe beatings; authorities contend he threw himself against a wall and died of a heart attack. Allegations have surfaced of family members and witnesses being coerced to withdraw their initial statements and to confirm the official version.

Despite updating its Labor Code in 2014, Cuba continues to violate conventions of the International Labour Organization that it ratified, specifically regarding freedom of association and collective bargaining. While the law technically allows the formation of independent unions, in practice Cuba only permits one confederation of state-controlled unions, the Workers’ Central Union of Cuba.

Following public protest, the Cuban government decided to remove language from the proposed new constitution that would have redefined marriage to include same-sex couples.

In November 2017, the US government reinstated restrictions on Americans’ right to travel to Cuba and to do business with any entity tied to the Cuban military, security, or intelligence services. The US also voted against a United Nations resolution condemning the US embargo on Cuba, a sharp break from its 2016 abstention.

In March, former Colombian President Andres Pastrana and former Bolivian President Jorge Quiroga were detained at Havana airport and denied entry. They had flown to Cuba to receive an award on behalf of the Democratic Initiative of Spain and the Americas, a forum of 37 former presidents and heads of state.

In April 2018, Secretary General of the Organization of American States Luis Almagro criticized the election of Díaz-Canel, calling it “an attempt to perpetuate a dynastic-familial autocratic regime. It is called a dictatorship.”

In January 2018, the foreign policy chief of the European Union met in Havana with Cuban authorities to accelerate the implementation of their Political Dialogue and Cooperation Agreement. On May 15, the EU and Cuba held their first-ever ministerial-level Joint Council meeting in Brussels.

Cuba is a current member of the Human Rights Council, having been reelected for the 2017-2019 term.