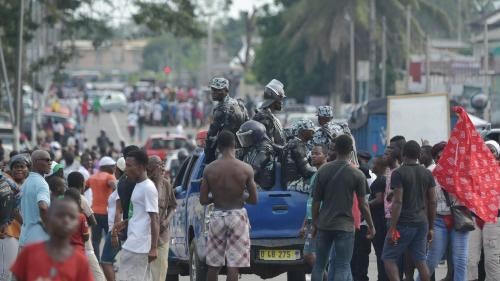 Côte d’Ivoire enjoyed relative stability in 2018, particularly given the absence of the army mutinies that had characterized the prior year. The government has still, however, made limited progress in tackling impunity and has not addressed the other root causes of past political violence, notably an undisciplined army and politicized judiciary. Côte d’Ivoire held local elections in October, with pockets of violence between rival political factions leaving several people dead.
Although Ivorian judges continued to investigate the crimes of the 2010-11 post-election crisis, President Alassane Ouattara’s August announcement of an amnesty for crimes related to the 2010-11 crisis raised concerns that victims will not get justice in Ivorian courts. The ICC is currently prosecuting Laurent Gbagbo, the former president, and Charles Blé Goudé, a former youth minister and leader of a pro-Gbagbo militia, for crimes against humanity allegedly committed during the 2010-11 post-election crisis. The ICC is also investigating crimes committed by pro-Ouattara forces.
A new press law thst provides some protection against the detention of journalists was adopted in December 2017. However, it sets out fines for defamation-related offences that could be used to suppress free speech. The Ivorian Constitution protects freedom of assembly, but Ivorian law requires demonstrators to request permits for public rallies. Security forces on occasion forcibly broke up largely peaceful opposition protests that had been denied a permit.

Côte d’Ivoire’s Special Investigative and Examination Cell continued its investigations into the human rights abuses of the 2010-11 post-election crisis, which left more than 3,000 dead and more than 150 women raped. The cell, established in 2011, has charged more than two dozen senior military officers and political leaders with crimes against humanity or war crimes.

However, the August amnesty announcement “for national reconciliation” for 800 people implicated in crimes related to the post-election crisis and subsequent political violence raised major doubts about whether those responsible for the crisis’ worst abuses would be tried in Ivorian courts.

A government-order implementing the amnesty stated that it would not apply to individuals who are “members of the military and armed groups.” But the list of people released or exonerated under the amnesty included individuals accused of serious human rights violations during the 2010-11 crisis, both from pro-Ouattara and pro-Gbagbo forces.

Those released due to the amnesty included former first lady Simone Gbgbo. Her acquittal in an Ivorian court for crimes against humanity during the post-election crisis was overturned by the Supreme Court on July 26, but the amnesty means that she will not now be retried. Simone Gbagbo is also wanted by the ICC on four counts of crimes against humanity, but the Ivorian government has refused to transfer her to The Hague.

The amnesty did at least result in the release of hundreds of pro-Gbagbo sympathizers who had languished for years in pretrial detention without trial, or who had been convicted of “threats against state security” in trials that often lacked basis due process.

The ICC continued the trial of Gbagbo and Blé Goudé for crimes against humanity committed during the 2010-11 crisis. The prosecution closed its case in early 2018, and the defense filed a no-case-to-answer submission in July, arguing that the changes against the two should be dismissed. At time of writing, a decision on the submission was pending.

The ICC continued its investigations into crimes committed by pro-Ouattara forces during the crisis, but has yet to issue arrest warrants. President Ouattara has said that no further individuals will be transferred to The Hague. Neither Côte d’Ivoire’s Special Cell nor the ICC are investigating crimes committed during election-related violence in 2000 or the 2002-2003 armed conflict.

Members of the security forces continued to engage in racketeering and extortion, particularly at checkpoints on secondary roads. A gendarme was killed by a mob on February 17 after shooting to death a taxi driver at a checkpoint in Bloléquin, western Côte d’Ivoire, allegedly for refusing to pay a bribe. Senior army commanders also continued to be implicated in the illicit exploitation of natural resources.

The lack of progress in accountability for past human rights violations means that commanders allegedly implicated in serious abuses remain in positions of authority within the armed forces.

There was no repeat of the large-scale army mutinies of 2017, although the mutinies’ underlying causes, particularly the lack of effective control over thousands of ex-rebels now serving in the army, remained largely unaddressed. In an effort to reduce the size of the security forces, more than 3,000 soldiers accepted payouts of 15 million CFA (US$26,000) to voluntarily leave the army.

The National Assembly in December 2017 adopted a new law on the press that, in principle, prohibits detaining or imprisoning journalists, although it leaves open the possibility that journalists might be detained or imprisoned under other laws. The new press law also includes several defamation-related offenses, punishable by fines, including the crime of “offending the President.”

An online news editor was fined 10 million CFA ($17,500) in January for “divulgation of fake news” in relation to a May 2016 interview with former-President Gbagbo’s son, Michel. The latter was sentenced to six months imprisonment for alleging in the interview that the government had unjustly detained, mistreated, and even disappeared pro-Gbagbo supporters, although the sentence against him had not been enforced at time of writing.

The government on several occasions prohibited opposition rallies and used tear gas and other non-lethal force to disperse largely peaceful demonstrators. Dozens of largely peaceful protesters were arrested during a March 22 opposition demonstration, 18 of which were on April 6 sentenced to 12 days’ imprisonment for disturbing public order.

Recurring disputes over land ownership remain an important source of intercommunal tension, particularly in western Côte d’Ivoire, although 2018 witnessed fewer reported deaths in land-related conflicts than previous years. A rural land agency, created in 2016 but only operational in 2018, began to accelerate efforts to facilitate land registration and demarcate village boundaries. Overall, however, implementation of a 1998 land law, which could reduce conflicts by registering customary land ownership and issuing legal title, remains extremely slow, in large part due to the lengthy and expensive land registration process.

In Abidjan, local government officials in July forcibly evicted thousands of people from the Port Bouët neighborhood without adequate prior notice. Ivorian forestry officials also in some areas continued to forcibly evict farmers from protected forests and national parks. Past government-led forestry reclamation efforts, such as the 2016 eviction of farmers from Mont Péko national park, left thousands of evicted families without access to adequate food, water, or shelter.

As in 2017, the organization of cour d’assises sessions in Abidjan and regional courts went some way to addressing the backlog of serious criminal cases. The criminal justice system still faces longstanding and fundamental challenges, however, including a lack of judicial independence, excessive use of pretrial detention, and prison overcrowding.

As of July, some 16,000 people were detained within a prison system designed for less than 9,000. Some 5,800 detainees were in pretrial detention. Detainees lack adequate access to medical care and suffer extortion by prison guards and fellow inmates. Partly to help ease prison overcrowding, President Ouattara pardoned more than 4,000 prisoners accused of non-political crimes in January 2018, another 4,000 in September.

Sexual and gender-based violence remain frequent, with social stigma and widespread impunity preventing many victims from reporting abuses and obtaining medical care or counseling. Although female genital mutilation has been criminalized since 1998, it is still practiced widely, affecting more than a third of women aged between 15 and 49. Child marriage is also still common, with more than a quarter of women now aged 20 to 24 having been married by age 18.

Côte d’Ivoire’s international partners, including China, the European Union, France, and the United States, failed to publicly comment on the August amnesty, consistent with their failure to meaningfully pressure the government to hold to account those implicated in past human rights violations.

France, the US, and the EU remained major donors in the justice and security sector. The lack of adequate progress made by Cote d’Ivoire in security sector reform was cited in an April leaked EU memorandum that underscored the precariousness of Côte d’Ivoire’s political stability.