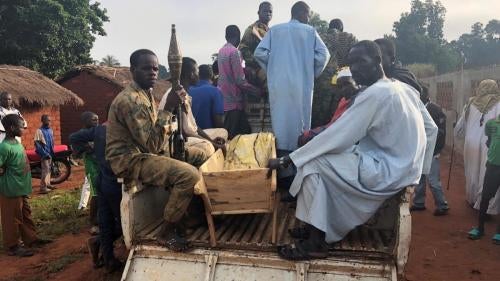 Armed groups continued to commit serious human rights abuses, expanding their control to an estimated 70 percent of the country, while the central government, led by President Faustin-Archange Touadéra, controlled the capital, Bangui, and surrounding areas to the west.

Fighting between predominantly Muslim Seleka rebels, anti-balaka militias, and other armed groups in the central, northwestern, and eastern parts of the Central African Republic forced thousands to flee their homes. Armed groups killed civilians, raped and sexually assaulted women and girls, attacked displacement camps, recruited and used children as soldiers, burned down villages, and took civilians hostage. Access to justice for serious crimes remained difficult or impossible for many people.

A political dialogue between the African Union (AU) and armed groups, aimed at reaching a political agreement to end the fighting, resumed in August but did not stop the violence and abuses against civilians. While there was some success in restoring order, particularly in Paoua, United Nations peacekeepers generally struggled to protect civilians from attack by armed groups, some committed around UN bases.

While some local courts rendered convictions of armed group leaders implicated in serious crimes, overall impunity for past abuses and war crimes continued. The Special Criminal Court, a hybrid court in the national justice system comprised of national and international judges and prosecutors, officially began to function in October.

Between December 2017 and February 2018, fighting between Revolution Justice (RJ) and the National Movement for the Liberation of the Central African Republic (Mouvement national pour la libération de la Centrafrique, MNLC) and indiscriminate attacks killed scores of civilians in the Ouham-Pendé province, near the town Paoua. The violence caused the displacement of up to 60,000 people around Paoua from December 2017 to February 2018. While many of the displaced later returned to their homes, MNLC and RJ fighters remained in the area and continued to threaten civilians.

Anti-balaka and the Union for Peace in the Central African Republic (Union pour la Paix en Centrafrique, UPC), a Seleka faction, clashed multiple times on the road between Bambari and Ippy, in the Ouaka province, and attacked civilians in the area. In March, anti-balaka fighters killed at least 15 civilian Peuhl herders, including women and children. In revenge, the UPC twice attacked a church in Seko, killing an estimated 40 internally displaced people who had sought shelter there.

In April, a joint operation between the UN and national security forces in the PK5 neighborhood of Bangui, dubbed “Sukula,” exacerbated tensions between UN peacekeepers and the “self-defense” groups. The operation aimed to dismantle bases of “self-defense” groups, some affiliated with the Seleka that had taken control of parts of the neighborhood, but the ensuing violence lasted two months, flaming tensions between Muslims and non-Muslims. An escalation of fighting led to the death of at least 70 people, some of them civilians. Following the “Sukula” operation militia fighters from PK5 attacked a religious service at Fatima church in May, killing at least 30 people, including a priest.  The operation did not dismantle the bases of “self-defense” groups, but instead led to the groups’ strengthening their position in PK5

Fighters from the Popular Front for the Renaissance in the Central African Republic (Front Populaire pour la Renaissance de la Centrafrique, FPRC), a Seleka faction, killed at least 24 civilians in and around Bria from August 25 to September 16, in Haute-Kotto province. They executed nine of the victims about five kilometers from a UN base. Anti-balaka groups also killed civilians in the area from June onwards, executing at least seven non-Muslim civilians outside of Bria for having done business with Muslims in the town.

The Ugandan rebel group the Lord’s Resistance Army (LRA) remained active in the southeast with allegations of killings and increased abductions of civilians.

Attacks against humanitarian workers increased across the country. In February, six aid and education workers were killed by unidentified assailants near Markounda, in Ouham province.

Three Russian journalists were killed by unidentified people in July outside of Sibut, in Kemo province. The men were allegedly investigating Russia’s increased role in the country and the possible role of Russian mercenary outfits on the ground.

Fighting and attacks by armed groups forced tens of thousands of people to flee their homes throughout 2018. The total number of internally displaced people in the country, based on UN figures, reached over 642,800, and the total number of refugees to 574,600, the highest numbers since 2014. Conditions for IDPs and refugees, most of whom stay in camps, remained harsh. Many displaced people had little or no access to humanitarian assistance. Persons with disabilities at displacement sites faced barriers to access sanitation, food, and medical assistance.

About 2.5 million people, out of a population of 4.6 million, needed humanitarian assistance. The humanitarian response plan was less than half-funded, with a budget gap of around US$268 million.

The UN peacekeeping mission, MINUSCA, deployed about 11,650 military peacekeepers and 2,080 police across many parts of the country. In November 2017, the UN Security Council approved an additional 900 troops for MINUSCA, but not all troops were in place by the end of 2018.

Under Chapter VII of the UN Charter, the mission is authorized to take all necessary means to protect the civilian population from threat of physical violence and to implement “the mission-wide protection of civilians strategy.”

Russian civilian and military advisers arrived in the country in December 2017 to train the national armed forces. Some Russian instructors were stationed with national forces outside Bangui.

While there was some progress in ensuring justice for serious crimes, impunity continued to be a key challenge and a driver of abuses in conflict.

Two armed group leaders, along with several other fighters, were convicted in a Bangui criminal court. In January, anti-balaka leader Rodrique Ngaïbona, alias “Andilo,” was found guilty on four charges, including murder, and given a life sentence. Human Rights Watch, in a 2017 report documented cases of rape by men under Ngaïbona’s command. In August, Idriss Ahmned el Bachar, the political head of the Central African Patriotic Movement (Mouvement Patriotique pour la Centrafrique, MPC), a Seleka faction, was convicted of “associating with criminals” and “illegal possession of weapons and ammunition” and was sentenced to five years in prison. Human Rights Watch has documented multiple war crimes committed by MPC fighters since 2016.

The Special Criminal Court, a hybrid court with national and international judges and prosecutors that will focus on grave international crimes committed since 2003, began functioning, with judges, investigators and other staff taking up their positions. In May, parliament passed the rules of procedure and evidence necessary for the court to proceed with investigations and prosecutions.

In June, an appeals chamber at the ICC overturned the war crimes and crimes against humanity convictions of Jean-Pierre Bemba, a former vice-president of Congo and leader of the Movement for the Liberation of the Congo (Mouvement pour la Libération du Congo, MLC). Bemba was found guilty of rape, murder, and pillage in March 2016 for crimes committed in the Central African Republic in 2002 and 2003. In September, the appeals chamber sentenced Bemba to 12 months for a related conviction of witness tampering, but this time had already been served. Bemba returned to Congo in August.

The Office of the Prosecutor at the ICC continued its second investigation into the situation in the Central African Republic, into alleged war crimes and crimes against humanity committed in the country since 2012. On November 17, the ICC took Alfred Yékatom, known as “Rombhot,” into custody. Yékatom is an anti-balaka leader who has been charged with crimes against humanity and war crimes committed between December 2013 and August 2014.

Three peacekeepers from the Republic of Congo were convicted in the Appeals Court in Brazzaville of the murder of 11 civilians in Boali in March 2014. At the time of the killing, the peacekeepers were serving in an African Union peacekeeping mission known as MISCA. The court found the men guilty of war crimes, which can carry a life sentence under Congolese law. The peacekeepers, however, were given three-year sentences. Representatives from an association of family members of the victims expressed interest in pursuing civil claims against the perpetrators.

In September, the UN Human Rights Council decided to continue the mandate of the UN independent expert on the Central African Republic for another year.