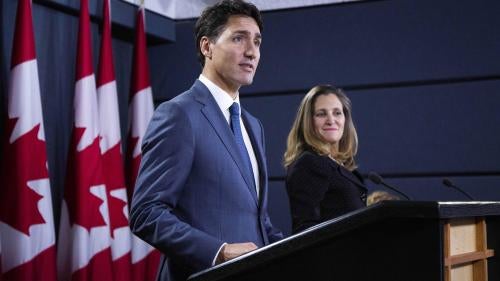 Since assuming office in 2015, the government of Prime Minister Justin Trudeau has made notable efforts to advance human rights in Canada. Domestically, the Trudeau government has been a vocal advocate for a pluralistic and multicultural society that respects the rights of immigrants, lesbian, gay, bisexual, and transgender (LGBT) people, and other minorities.

Despite these efforts, Canada continues to struggle to address issues, including discrimination, against Indigenous peoples and abuses by Canadian companies operating overseas. The Trudeau government has also not suspended arms sales to the Saudi-led coalition despite policy guidelines urging close control over exports of military equipment to countries with a record of human rights violations.

Prime Minister Trudeau promised a “renewed, nation-to-nation relationship with Indigenous peoples,” but there remain considerable challenges to undoing decades of systemic discrimination. In February 2018, the government announced fundamental changes to how the federal government recognizes Indigenous rights and land title, vowing to work with Indigenous communities across Canada to develop a new legal framework to advance self-determination and self-governance. In May, parliament passed a private member’s bill aimed at ensuring that Canada’s laws are in harmony with the United Nations Declaration on the Rights of Indigenous Peoples.

However, the water crisis in First Nations communities continues to impede efforts to advance Indigenous rights in Canada. While the Trudeau government lifted long-term boil water advisories (issued when drinking water is or could be contaminated) between November 2015 and October 2018, 68 First Nations communities across the country remained subject to such water advisories, several of which were new, at time of writing.

The 2018 budget provides an additional CDN$172.6 million over three years for infrastructure projects to support high risk water systems. The government has committed to end all drinking water advisories on First Nations reserves by March 2021. The drinking water crisis extends beyond these advisories to include problems related to wells, insufficient operations and maintenance funding, and lack of source water protection.

In 2016, the Trudeau government announced the establishment of a National Inquiry into Missing and Murdered Indigenous Women and Girls, with a mandate to examine the systemic causes of violence against Indigenous women and make concrete recommendations for action.

Since its establishment, the inquiry has been plagued by delays and complaints from victims’ families about inadequate communication and transparency. In March, the inquiry requested a two-year extension to finalize its work. In June, the government announced it would extend the process by only six months, with the inquiry’s final report due in April 2019.

In April, after a visit to Canada, the UN special rapporteur on violence against women called for improvements in Canada’s legal framework, and urgent action on systemic violence against indigenous women.

Since 2011, Human Rights Watch has urged the Canadian government to establish an ombudsperson’s office with a mandate to independently investigate and publicly report on human rights abuses involving Canadian extractive companies. In January, the Trudeau government announced the creation of a new Canadian Ombudsperson for Responsible Enterprise (CORE) tasked with investigating “allegations of human rights abuses linked to Canadian corporate activity abroad.” The ombudsperson will focus on the mining, oil and gas, and garment sectors. The government announced that it may withhold support, including financial support, from companies that are found to have committed violations.

In March and April, Citizen Lab, a University of Toronto-based technical research group, published two reports alleging that Canadian-made web-filtering technology is being exported to several repressive governments around the world where it is used to censor political speech, news, and dissident websites, and to block searches for keywords related to LGBT identities.

In response, a spokesperson for Global Affairs Canada said the government was “concerned by allegations of the misuse of Canadian-made technology, including reports of its use in inappropriately preventing free access to the internet.”

In June, the Senate Committee on Human Rights released a report concluding that Canada’s export laws have enabled the federal government to prioritize economic and other foreign policy interests over human rights. The report recommended that the minister of foreign affairs introduce amendments to the Export and Import Permits Act (1947) requiring the government to put greater emphasis on human rights concerns in issuing export permits. The report also called on Global Affairs Canada to work with industry and civil society to establish a monitoring mechanism to help prevent Canadian-made goods and services from ending up in the hands of human rights abusers.

In May, the Senate passed Bill C-66, which expunges the records of individuals who were prosecuted because of their sexuality when homosexuality was criminalized in Canada.  The bill follows Prime Minister Trudeau’s 2017 apology in the House of Commons for the historic mistreatment of sexual minorities by the Canadian government.

Throughout 2018 the Canadian government actively addressed the Rohingya crisis. In May, the government announced it would support a referral to the International Criminal Court (ICC) and measures to preserve evidence of crimes by the Myanmar military. By June, Canada had imposed targeted sanctions against eight senior Myanmar military officials for their involvement in the violence and persecution of Rohingya Muslims in Rakhine State.

In August, following a tweet by Canada’s Foreign Ministry calling for the immediate release of detained Saudi women’s rights activists, Saudi Arabia announced it would expel the Canadian ambassador to Riyadh, freeze all new trade and investments with Canada, suspend state airline flights to Canada, and withdraw all Saudi students from Canadian universities. Following the announcements by the Saudi Foreign Ministry, Foreign Minister Chrystia Freeland said that “Canada will always stand up for the protection of human rights, including women’s rights and freedom of expression around the world.”

Despite widespread evidence of abuses in Yemen and Canadian policy guidelines that urge close control over exports of military equipment to countries with a record of human rights violations, the Canadian government continues to allow Canadian arms manufacturing companies to sell arms to the Saudi-led coalition. Human Rights Watch has documented repeated laws of war violations by the coalition in Yemen, some likely war crimes, and has repeatedly urged the Canadian government and others to stop selling weapons to Saudi Arabia until it credibly investigates and curtails its unlawful attacks.

In February 2018, Foreign Minister Freeland announced that a government probe “found no conclusive evidence that Canadian-made vehicles were used in human-rights violations.” The government did not publicly release the report on this investigation but announced that, despite the findings, it would amend Canadian arms export legislation to legally require the foreign minister to refuse to issue export permits if there is a substantial risk that equipment could be used to commit human rights violations.

In May, Canada underwent its third Universal Periodic Review by the UN Human Rights Council. States urged Canada to improve its treatment of Indigenous people, including women and girls.

In April, following a mission to Canada, the UN working group on business and human rights noted the absence of a coherent national policy framework “to protect against business-related human rights abuses and promote effective business respect for human rights….” The working group’s report followed expressions of concern by several other UN bodies about abuses linked to Canadian company operations abroad and the lack of access to remedies for victims.