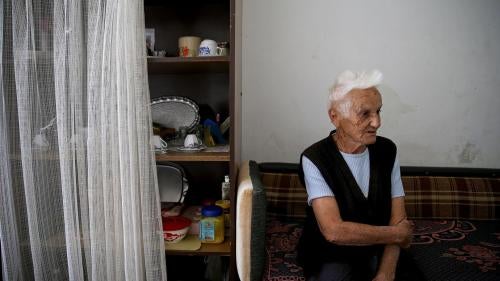 Bosnia and Herzegovina made limited progress in 2018 towards addressing long-standing human rights problems. Members of national minorities were ineligible to stand for the presidency in the 2018 general elections because of the ongoing failure to amend discriminatory provisions of the constitution. Authorities did not provide basic support to thousands of asylum seekers and migrants who arrived in 2018. Journalists continued to face threats and interference in their work. War crimes cases continued to be resolved at a slow rate.

Despite multiple rulings of the Bosnian Constitutional Court and the European Court of Human Rights (ECtHR) that the constitution discriminates against ethnic and religious minorities, there was no progress during the year towards amending it to allow Roma, Jewish, and other minorities to run for the presidency in 2018 October general elections.

Authorities in Mostar failed again to change the city’s electoral statute ordered by the Bosnian Constitutional Court in 2010 to reflect the one person, one vote principle, scuppering an idea to hold local elections in Mostar in 2018 at the same time as the October general elections. Political disagreements mean the city has not held local elections since 2008, disenfranchising its voters.

A survey conducted in April 2018 by the United Nations Development Programme showed Roma in Bosnia and Herzegovina continue to face many difficulties accessing and enjoying, health care, education, housing, and employment, notwithstanding some improvements in living standards. Many Roma lack identification documents necessary to access services.

The numbers of asylum seekers and migrants entering the country increased significantly during the year.  According to the Service for Foreigners' Affairs of Bosnia and Herzegovina, between January and November 2018, 21,163 asylum seekers, most of whom have either lodged claims or indicated an intention to lodge asylum claims, entered Bosnia and Herzegovina, compared to only 755 in the whole of 2017. The three largest nationalities were Pakistan, Iran, and Syria.

The state did not provide adequate shelter, food, and access to medical assistance to the new arrivals, particularly in Velika Kladusa and Bihac municipalities. In November 2018 there were only two state-managed centers for migrants and refugees—an open asylum center with capacity of about 154, and an open refugee reception center with capacity of around 290—and two temporary accommodation centers for migrants set up with support of international organizations. The lack of accommodation and services forced thousands to live in the streets, abandoned buildings, or tents.

The lack of official accommodation means that many would-be asylum seekers cannot register a place of residence upon arrival, a requirement to apply for asylum. This leaves many without access to asylum procedures even after they register their intention to apply. Among the 2018 arrivals, over 19, 900 asylum seekers expressed intention to apply for asylum, but only 1,314 applied.

Twenty-three years after the end of the war in Bosnia, only 42 percent of Bosnian refugees have returned to Bosnia, according to the Ministry for Human Rights and Refugees, and 91,813 remained internally displaced at the end of June 2018, many still living in 156 collective centers. At time of writing, 737 homes for internally displaced had been built under the Regional Housing Programme. A plan to build housing for displaced people living in 121 collective centers by 2020 under a Council of Europe Development Bank-funded project had started but was moving slowly in most municipalities.

In July 2018, Bosnia and Herzegovina signed a joint Declaration on War Crimes at a summit meeting on the Western Balkans with regional and EU leaders, committing to assist efforts to bring perpetrators of human rights crimes to justice. However, the Bosnian government did not support a civil society-backed initiative to establish a regional truth commission, known as RECOM.

With the closure of the International Criminal Tribunal for the former Yugoslavia (ICTY) in December 2017, the prosecution of war crimes in domestic courts took on a new importance. But in practice, progress in Bosnia remains slow.

A revised National War Crimes Processing Strategy has been waiting approval by the Council of Ministers since February 2018. The revised strategy aims to improve the process of determining which cases merit handling by the State Court War Crimes Chamber and prosecutor, and which can be dealt with in entity, district, and cantonal courts.

There were 114 cases for war crimes before the State Court involving 296 defendants as of September 2018. Between January and September 2018, the court delivered 29 verdicts, 14 convictions, 12 acquittals, and three partial acquittals. The court delivered seven verdicts for conflict-related sexual violence, five of which were convictions. Between January and September 2018, the Supreme Court of Republika Srpska, which tries war crimes cases in that entity, received seven war crime cases, four of which resulted in convictions and three of which were being processed at time of writing. One of the four convictions was for conflict-related sexual violence. Statistics for cantonal courts in the federation were not available at time of writing.

In January 2018, the State Court confirmed a genocide indictment against former Bosnian Serb Interior Minister Tomislav Kovac. He is accused of controlling the police forces involved in capturing, detaining, and executing up to 8,000 Bosniak men in Srebrenica in 1995.

Several cases were dealt with during the year by the residual Mechanism for International Criminal Tribunal (MICT) set up to deal with any outstanding issues arising from the ICTY caseload.  In April 2018, former Bosnian Serb wartime President Radovan Karadzic in the appeal hearings at the MICT against his March 2016 conviction at the ICTY for genocide, crimes against humanity and war crimes, denied the charges and demanded a new trial. Prosecutors urged the judges at the MICT to reject Karadzic’s appeal and change his sentence to life in prison.

Despite existing laws that regulate civil society's reporting of income, officials in Republika Srpska drafted a new law on foreign donations which, if passed by the Republika Srpska assembly, would allow authorities to categorize NGOs who receive foreign donations as "foreign agents" and monitor their work and income in unwarranted ways that could discourage their independent work.

In August 2018 Vladimir Kovacevic, a journalist at BN TV, was attacked in Banja Luka after covering a protest over the failure of authorities to investigate or solve the suspicious death of a 21-year-old man. He was hospitalized, and at time of writing the attack was being investigated by police as an attempted murder. In response to the attack, the public and other journalists organized protest walks demanding better safety and protection standards for journalists.

Between January and September 2018, Sarajevo Open Center, a lesbian, gay, bisexual, transgender, and intersex (LGBTI) and women’s rights group, recorded 27 hate-motivated incidents against LGBTI people, including 10 involving domestic violence, and 136 cases of hate speech, mostly online. Five cases were reported to police, one of which was referred to a prosecutor. However, the status of the investigation was unknown at time of writing.

According to Foundation CURE, a feminist activist organization, politicians in Bosnia and Herzegovina still do not publicly discuss LGBT rights and concerns, police often dismiss hate crimes against LGBT people, and acquiring permits for LGBT events and peaceful gatherings was significantly more difficult in 2018 than in previous years.

In a notable development, Republika Srpska amended its criminal law to include an offence of public incitement to violence and hatred based on sex, sexual orientation, and gender identity.

In June 2018, the Council of the European Union told Bosnian authorities to ensure that any changes to electoral law not further complicate efforts to implement the European Court of Human Rights’ judgement on discrimination against minorities running for political office (Sejdic-Finci case) but did not insist on immediate implementation of the 2009 ruling.

The EU, the Organization for Security and Co-operation in Europe, and the United States Embassy jointly urged the Council of Ministers in Bosnia and Herzegovina to prioritize adopting the revised National War Crimes Processing Strategy.

In April 2018, the OSCE reviewed the draft law on Public Assembly in the Federation of Bosnia and Herzegovina and concluded that if adopted it would violate freedom of assembly, unduly burden organizers of assemblies, and pose severe restrictions on venues for assemblies.

In their August 2018 concluding observations of the periodic report of Bosnia and Herzegovina, the United Nations Committee on the Elimination of Racial Discrimination called on Bosnian authorities to include in its criminal code all grounds for discrimination, ensure that local laws enable equal rights for all, and end “two schools under one roof,” the practice of ethnic-based segregation within a single school.