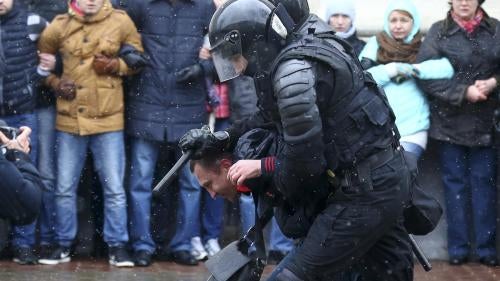 Belarus remains the only European country to use the death penalty. Those condemned to death are executed by a shot to the head. Authorities do not inform families of the execution date or the burial place.

According to the Belarusian Association of Journalists, between January and August, authorities arbitrarily detained 29 journalists, including while covering Freedom Day protests.

In December 2017, a court fined Anatol Bukas, chief editor of Naviny.by, 345 Belarusian rubles (roughly US$158) for writing about an unauthorized rally in Minsk. In November, the Justice Ministry issued the outlet a warning for violating mass media legislation. Under Belarusian law, two warnings may lead to an outlet’s closure.

In February, the police beat Belsat cameraman Andrus Koziel for live-streaming vote counting during local elections and jailed him for one night. In March, a court fined him 735 Belarusian rubles (US$338) for disobeying police.

In February 2018, Belarusian courts handed down suspended sentences of five years’ imprisonment to Yuri Pavlovets, Dimitri Alimkin, and Sergei Shiptenko, bloggers with the Russian-language websites Regnum, Lenta.ru and EADaily, on bogus charges of inciting extremism and sowing social discord between Russia and Belarus. Yuri Pavlovets and Sergei Shiptenko appealed to the Supreme Court, which upheld the verdict.

In April, authorities arrested Dzmitri Halko, editor of Belarussian Partisan on dubious charges of assaulting police officers in November 2017 in an incident when police interrupted his son’s birthday party. In July, a court sentenced Halko to four years in prison and a fine of 930 Belarusian rubles (US$430). At time of writing, Halko’s appeal was pending.

In August, authorities launched a criminal probe against several publications for allegedly using passwords for the state news agency, BelTA, without authorization in order to access it for free. The disproportionate response raised concerns that the government was using the issue to punish news outlets. Police searched the offices of BelaPAN and TUT.by, an independent news website, as well as the editorial offices of several other media outlets (including some state-owned) and the homes of several journalists. At least 18 journalists were arrested on charges of “unauthorized access to computer information causing significant harm.” All were released by August 10; criminal proceedings against them continued at time of writing.

After admitting she was aware that her staff was using login data for BeITA's paid subscription, TUT.by's chief editor was charged with negligence, punishable by up to five years in prison.

In December 2017 and January 2018, the Information Ministry ordered the blocking of independent news websites Belarusian Partisan and Charter ’97 for “disseminating prohibited information.”

June amendments to the Law on Mass Media introduced additional, excessive restrictions requiring that all online media outlets keep public records of the names of people who submit comments online and disclose that information to authorities. The amendments also provided for holding owners of registered online media criminally liable for any content posted on their website.

Authorities refused to investigate police mistreatment of Aliaksei Loika during a police raid at Viasna Human Rights Center in March 2017. In October 2017, border officials arbitrarily detained and searched another Viasna member, who was returning to Belarus after attending a human rights forum, before ultimately releasing him.

In February, human rights lawyer Elena Tonkacheva returned to Belarus after the expiration of an arbitrarily imposed three-year entry ban.

Authorities pressured lawyers working on politicized cases. In September, the Justice Ministry suspended the license of Anna Bakhtina, a defense lawyer with more than 38-years’ experience, alleging that she was “insufficiently competent” to practice law. In October, a court upheld the decision. Bakhtina was one of eight lawyers the authorities forced to take an “extraordinary certification” exam. All eight were representing defendants allegedly associated with White Legion, a disbanded nationalist group. The seven other lawyers were declared “partially compliant” and had to re-take the examination in March 2018. They all passed.

Police arbitrarily detained at least 110 people in connection with peaceful protests held in Minsk and other cities on March 25, traditionally celebrated by the opposition as Freedom Day.

In the lead-up to the rally in Minsk, police arrested opposition leader Mikalay Statkevich and rally organizers Uladzimir Niakliayeu, Viachaslau Siuchyk, and Maksim Viniarski. Courts sentenced them to up to 10-days’ detention.

Police detained seven members of the Belarusian Helsinki Committee and Viasna while they monitored the rally in central Minsk, charging six with “participating in unauthorized mass events” and additionally charging one with “disobeying a police officer.” All were released the same day, and in April, filed appeals against unlawful actions by police. An official inquiry found no police misconduct. In August, the charges against the activists were dropped due to the statute of limitations.

In May, police charged lesbian, gay, bisexual, and transgender (LGBT) activist Vika Biran for staging single-person pickets near three governmental buildings to protest the Interior Ministry’s statement decrying the British embassy for flying a rainbow flag to mark the International Day Against Homophobia. Courts convicted her of two offenses of violating rules on public gatherings and fined her a total of 735 Belarusian rubles (US$335).

In May, the Belarusian Council of Ministers submitted a draft law to repeal Article 193.1 of the criminal code, which criminalizes participation in the activities of unregistered organizations, and to replace criminal liability for that offense with an administrative fine of up to 1,225 Belarusian rubles (US$600).

In April, the Justice Ministry rejected the seventh registration application filed by the Belarusian Christian Democracy party citing minor errors in the application. In May, the Supreme Court dismissed the party’s appeal.

In August, a court in Minsk sentenced the head of the Belarusian Radio and Electronics Workers’ Union and its accountant to a five-year curfew and other restrictions on dubious tax evasion charges.

The government continued to refuse to cooperate with United Nations Special Rapporteur on Belarus Miklos Haraszti, appointed in 2012. In his final report to the UN Human Rights Council (UNHRC) as special rapporteur in June, he stated that Belarus is “governed by a purposefully repressive legal framework, aggravated by regularly recurring, centrally planned violent crackdowns.” In June, the UNHRC renewed the the mandate of the special rapporteur on Belarus for another year.

In December 2017, in its concluding observations to Belarus’ periodic report to the UN Committee on the Elimination of Racial Discrimination, the committee urged the government to investigate all cases of racial discrimination, take measures to prevent discrimination against Roma, and promote independence of the judiciary.

In its June review of Belarus’ fifth periodic report to the UN Committee against Torture (CAT), the committee urged Belarus to put in place a moratorium on executions, with a view to abolishing the death penalty, highlighted “widespread” use of torture in Belarus, called for an end to the use of torture in detention, and warned against the use of psychiatric hospitalization for non-medical reasons.

In an April resolution, the European Parliament deplored the continued harassment of Belarusian activists, politicians, and journalists and urged the authorities to unblock the website of Charter ’97, abandon amendments to the Law on the Media, and end persecution of independent bloggers.

The European Union decried shortcomings in the February local elections and spoke out against Belarus’ continued use of the death penalty and against the Freedom Day crackdown, stressing that respect for human rights is key in shaping the EU’s future relationship with Belarus. In February, EU member states extended for one year the EU’s restrictive measures against Belarus in response to continued human rights violations, including an arms embargo and targeted sanctions against four individuals. Despite Belarus’s lack of progress on human rights, the European Commission continued talks with the government on visa facilitation and readmission.