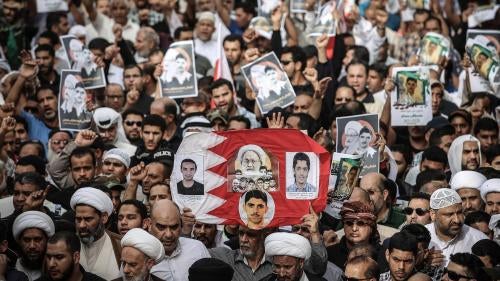 Civilian and military courts continue to convict and imprison peaceful dissenters, including prominent human rights defenders and opposition leaders, under the guise of national security.

Authorities have failed to hold officials accountable for torture and other ill-treatment despite the installation of oversight mechanisms as recommended by the Bahrain Independent Commission of Inquiry (BICI), which King Hamad Al-Khalifa established following mass protests in 2011.

The government announced general elections for November 2018 despite serious restrictions on free speech and assembly.

Authorities in Bahrain have used overly broad definitions of terrorism in the Terrorist Act to detain protesters and convict opposition leaders, including people who participated in anti-government demonstrations in 2011. The definition extends to non-violent acts, the aim of which are “disrupting the public order,” “threatening the Kingdom’s safety and security,” and “damaging national unity.”

The Interior Ministry on March 25 threatened to punish harshly those who criticized the government online, saying it was already tracking accounts that “departed from national norms, customs and traditions.”

On March 27, the Bahrain Cassation Court upheld a 10-year prison sentence and stripping of citizenship for Sayed Ahmed Al-Mousawi, a photographer, arrested in 2014 after covering anti-government protests.

On June 11, King Hamad signed into law an amendment to the Exercise of Political Rights Law that would disqualify many potential opposition and independent candidates from running for office, including in general elections slated for late 2018. The amendments prohibit individuals from running if they are “felons and persons previously convicted to a prison sentence of six months or more;” or “leaders and members of dissolved political organizations who committed a serious violation of the provisions of the Kingdom’s Constitution or laws;” and persons who “destroy or disrupt the conduct of constitutional or parliamentary life or whose membership were revoked.”

The Information Affairs Ministry suspended Al Wasat, the last independent newspaper in the country, in 2017. The same year, the government also dissolved the last opposition political formation, the secular-left National Democratic Action Society (Wa’ad), accusing members of “incitement of acts of terrorism and promoting violent and forceful overthrow of the political regime.”

In his report to the United Nation Human Rights Council’s 39th session, UN Secretary-General António Guterres on August 13 condemned long-standing travel bans imposed on many civil society representatives that prevented them from participating in sessions of the council in Geneva between June 2017 and June 2018.

On November 4, the Bahrain High Court of Appeals overturned a lower court’s decision from June 2018 to acquit of all charges three senior members of Bahrain’s largest now-dissolved political opposition party Al-Wifaq, including the group’s leader Sheikh Ali Salman, and sentenced them to life in prison for allegedly spying on behalf of Qatar. While Salman has remained in detention in Bahrain since December 2014, the two other members of the group who were also sentenced, Sheikh Hassan Sultan and Ali Alaswad, were tried in absentia.

Courts stripped 258 persons of their citizenship for alleged offenses that include “terrorism,” “national security,” and “offending the country,” between January and November, bringing the total since 2012 to 764 people, according to the London-based Bahrain Institute for Rights and Democracy (BIRD). Most Bahraini nationals stripped of their citizenship were rendered effectively stateless.

All known citizenship revocations since January have been handed down by civil or military courts. In 108 cases prior to 2018, authorities directly revoked a person’s citizenship through a royal decree or order of the Interior Ministry.

Between January 29 and February 1, the government deported to Iraq eight stateless Bahrainis whose citizenship it had previously stripped.

Since 2011, authorities have failed to credibly investigate and prosecute officials and police officers who allegedly committed violations, including torture. Despite numerous complaints by detainees and their family members, the Interior Ministry’s Ombudsman Office and Special Investigations Unit failed to hold prison guards and officers to account.

Hajer Mansoor Hasan, who was sentenced on dubious terrorism charges and is the mother-in-law of exiled rights defender, Sayed Ahmed Al-Wadaei, filed complaints in March, July, and August, claiming that Isa Town Prison personnel had mistreated her. The Ombudsman’s Office responded to each of the complaints denying accusations.

In September, Hasan and two other female detainees said prison officials assaulted them after they complained that authorities denied them the right to participate in religious commemorations on the occasion of the Shi’ite religious festival of Ashoura. According to Hasan’s relatives, prison authorities have since restricted the inmates’ access to family visits, phone calls, and time spent outside their cells.

Despite commitments to implement substantive recommendations of the Bahrain Independent Commission of Inquiry (BICI) pursuant to mass anti-government protests in 2011, authorities in 2017 reversed two such recommendations it had previously implemented, by restoring arrest and detention authority to the abusive and unaccountable National Security Agency (NSA) and by giving military courts jurisdiction over civilians.

Bahrain ended a de facto seven-year moratorium in January 2017 when it executed three Shia men for a bomb attack that resulted in the deaths of three police officers amid allegations that they had been tortured into confessing.

On April 26, King Hamad commuted the sentences of four men among a group of six who a military court had sentenced to death in December 2017. The other two were tried in absentia.

As of November, Bahraini prisons held 14 people on death row.

On March 21, authorities sentenced in absentia, to two months in prison, Duaa Al-Wadaei, wife of prominent exiled activist Sayed Ahmed Al-Wadaei, for allegedly insulting an officer at Manama airport in 2016. Three of Al-Wadaei’s other relatives are serving prison terms after authorities sentenced them in October 2017 on dubious terrorism-related charges that appear to have been filed in reprisal against his human rights work.

Nabeel Rajab, one of Bahrain’s preeminent human rights defenders and head of the Bahrain Center for Human Rights, completed a two-year prison term for “spreading false news and rumors about the internal situation in the Kingdom, which undermines the state prestige and status.” He then immediately began a five-year prison term for his Tweets criticizing alleged torture in Bahrain’s Jaw Prison and the Saudi-led military operations in Yemen. The Manama Appeals Court on June 5 upheld the latter conviction, finding that Rajab “deliberately disseminated in wartime false or malicious news, statements or rumors […] so as to cause damage to military preparations;” “publicly offended a foreign country,” in this case Saudi Arabia; and “insulted a statutory body.”

Rajab, who suffers from a serious skin condition, has been in detention since June 2016.

On August 13, the United Nations Working Group on Arbitrary Detention called for Rajab’s immediate release, saying his detention was not only arbitrary, because it resulted from his exercise of the right to freedom of opinion and expression, but also constituted “discrimination based on political or other opinion, as well as on his status as a human rights defender.”

Bahraini law discriminates against women in the right to divorce and transmission of Bahraini nationality to their children on an equal basis to men.

Adultery and sexual relations outside marriage are criminalized. No law prohibits discrimination on the grounds of sex, gender identity, or sexual orientation.

Bahrain continued to participate in the Saudi Arabia-led coalition military operations in Yemen.

On March 23, the Department of State stressed the key role Bahrain played in the security architecture of the Gulf region, saying the kingdom was a vital United States partner in major defense initiatives as well, as providing support for countering terrorism. The US maintains a major naval base in Bahrain.

As of November, the State Department had approved five major weapons sales to Bahrain in 2018 worth an estimated US$1.4 billion. This resumption of arms sales came after the US lifted in March 2017 the human rights conditions that the Obama administration had attached to a sale to Bahrain of F-16 fighter jets worth $2.8 billion.

The European Parliament passed a resolution on June 14 on the human rights situation in Bahrain that called on the government to release all political activists and human rights defenders, including Nabeel Rajab. It also called for an official moratorium on all executions, and for an end to the military trials of civilians. It condemned the high number of death sentences and criticized the stripping of citizenship “as a means of reprisal.”

In his last address on June 18 to the UN Human Rights Council (HRC), during its 38th session, former UN High Commissioner for Human Rights Zeid Ra'ad Al Hussein said that Bahrain continued to refuse his office and the Special Procedures unconditional access to the country “amid continued crackdowns on civil society and additional legislation which further restricts the people's fundamental rights.”

Zeid’s successor, High Commissioner Michelle Bachelet, decried on September 10 during her opening statement at the 39th Session of the HRC, the “large number of cases of revocation of citizenship” and called for the release of all human rights defenders who are currently arbitrarily detained, including Nabeel Rajab.