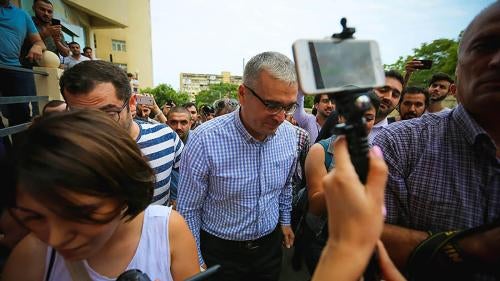 Azerbaijan’s appalling human rights record did not improve in 2018. In April, President Ilham Aliyev was elected for a fourth term in elections that international observers found lacked competition, and “took place in a restrictive political environment and under laws that curtail fundamental rights and freedoms.”

Azerbaijan’s international partners criticized abuses, but did not condition ties with Azerbaijan on improvements.

Authorities released some political activists, but continued to imprison other critics on politically motivated charges.

In August, authorities released prominent political activist Ilgar Mammadov subject to a suspended two-year term, after he spent over five years in prison on charges that the European Court of Human Rights (ECtHR) found to be unlawful and in retaliation for his activism. In December 2017, the Council of Europe’s (CoE) Committee of Ministers had triggered unprecedented proceedings against Azerbaijan for failing to implement the court’s judgment in Mammadov’s case.

Elnur Farajov, an opposition party member imprisoned on bogus drug charges, died from cancer shortly after his May release by presidential pardon, having been denied adequate medical treatment in prison.

Authorities continued to target leading and rank-and-file members of opposition political parties. In January, a court sentenced Azerbaijan Popular Front Party (APFP) Deputy Chairwoman Gozel Bayramli to three years on false smuggling charges. In September, a court sentenced Orkhan Bakhishli, another leading APFP member, to six years in prison on bogus drug possession charges. In September, Mammad Ibrahim, advisor to the APFP’s chairman, was to be released after serving a three-year-term on bogus hooliganism charges, but on the day of his expected release, officials brought additional charges against him, claiming they found a knife under his pillow. If convicted, he could face up to six additional months in jail.

Among nine other APFP members in prison are Fuad Ahmadli, Fuad Gahramanli, and Murad Adilov.

In March, a court sentenced Ahsan Nuruzade, senior member of Muslim Unity, an unregistered, conservative Shiite movement, to seven years in jail on bogus drug charges. At least 17 other members of Muslim Unity remained in prison on dubious extremism and other charges.

In May, a court convicted Alikram Khurshidov, an active member of the opposition Musavat party, on bogus hooliganism charges and sentenced him to five years’ imprisonment, reduced by six months upon appeal in August. He actively criticized government corruption on social media.

Authorities also held dozens of critics in jail for up to 30 days following pro forma court hearings on bogus misdemeanor charges, including six members of the opposition REAL political party after they organized a peaceful march in Baku in May to mark Azerbaijan republic’s centennial anniversary.

Attacks on the Judiciary

Pressure mounted against lawyers who work on human rights-related cases.

In April, the Azerbaijan Bar Association, which is closely tied to the government, suspended the licenses of Asabali Mustafayev and Nemet Karimli, lawyers who often worked on cases involving political persecution. The move came after the prosecutor’s office lodged complaints about public statements the lawyers made concerning the politically motivated cases on which they were working. Earlier in January, based on a similar complaint, the Bar Association suspended the license of another lawyer, Fakhraddin Mehdiyev.

In June, human rights lawyer Irada Javadova was disbarred pursuant to a complaint that authorities allegedly pressured her client to file against her.

In November 2017, Yalchin Imanov lost his license after going public about his defendants’ torture in prison.

In July, the Bar Association reprimanded Fuad Agayev, who represents several prominent political prisoners, based on a bogus complaint that he had insulted a prison guard.

All mainstream media remained under tight government control. Defamation is a criminal offense. People who publicly criticize the authorities faced arrest and threats aimed at silencing them; at least 10 remained behind bars.

In January, a court convicted journalist Afghan Mukhtarli to six years on bogus smuggling charges after he was kidnapped in May 2017 from Georgia, where he had lived in exile out of fear for his security, and illegally transferred to Azerbaijan.

In June, the Communications Ministry permanently blocked three news websites following the prosecutor general’s accusations that they “supported terrorism” with their “incorrect coverage” of an assassination attempt on a public official and the ensuing public unrest.

In August, courts in Baku ruled to block three local news websites, az24saat.org, xural.com, and monitortv.info, after officials brought defamation charges against them.

Torture and Ill-Treatment in Detention

In July, the Council of Europe’s Committee for the Prevention of Torture and Inhuman or Degrading Treatment or Punishment (CPT) published reports on six visits to Azerbaijan, between 2004 and 2017. The CPT found that torture and other ill-treatment by the police and other law enforcement agencies, and impunity for it, remain systemic and endemic. Detainees are often denied access to lawyers of their choosing.

In February, Elgiz Sadigli, brother of an outspoken exiled activist, was abducted and held for four days in incommunicado police custody, where he said police beat him and subjected him to electric shocks in retaliation for his brother’s activism; he was then sentenced to 30 days on disobedience charges. Authorities failed to conduct an effective investigation into his allegations of torture.

No progress was made in the investigation into the 2017 suspicious death in custody of blogger Mehman Galandarov, whom authorities said they found hanged in his prison cell and swiftly buried with no witnesses.

International financial institutions funded Azerbaijani state hydrocarbon projects, despite their institutional mandates that require them to ensure project partners respect principles of pluralism and transparency. The US, European Union, and Azerbaijan’s other bilateral and international partners continued to criticize the government’s targeting of critics.

In March 2018, the European Investment Bank (EIB) approved a €932 million loan for the construction of the Trans-Anatolian Natural Gas Pipeline (TANAP), which brings natural gas from Azerbaijan across Turkey to western Europe. Azerbaijan’s state-owned company SOCAR is a 58 percent partner of the pipeline. The EIB did not condition the loan on the improvement of human rights, even though its obligations under the EU Charter of Fundamental Rights mean it should not finance projects that would encourage or support human rights violations.

In October 2017, the European Bank for Reconstruction and Development (EBRD) approved a US$500 million loan for TANAP, despite the bank’s commitment to transparency and Azerbaijan’s suspension from a key extractive revenue transparency initiative.

In May, Azerbaijan underwent the third cycle of the Universal Periodic Review at the United Nations Human Rights Council, during which it continued to deny allegations of rights violations. Several states expressed concerns about new restrictions on civil society.

In April, an independent body published a report finding that Azerbaijan exerted undue influence on members of the Parliamentary Assembly of the Council of Europe (PACE) to minimize criticism of its human rights record. The report said that this improper influence resulted or “contributed to” the voting down of a PACE report on political prisoners in Azerbaijan. In June, the PACE appointed a new rapporteur on the political prisoners issue.

A July, European Parliament resolution threatened not to ratify a partnership deal with Azerbaijan, under negotiation since 2017, unless it freed political prisoners and allowed nongovernmental groups and lawyers to work without undue government interference.

In August, the EU welcomed Mammadov’s conditional release and called for the release and rehabilitation of all others detained on political grounds.

In August, during her first visit to Azerbaijan, German Chancellor Angela Merkel raised human rights issues with President Aliyev, arguing that “strong civil society must be part of an open, secular society.” In a show of support, Merkel also met with civil society activists.

In August, the US administration welcomed the release of Ilgar Mammadov and urged Baku to release "all other individuals who have been imprisoned for exercising their fundamental freedoms.”

In August, after the government blocked news websites, the Organization for Security and Co-operation in Europe (OSCE) Representative on Freedom of the Media, Harlem Désir, called on the authorities to reform the laws and regulations affecting media, and to encourage pluralistic debate on all issues of public importance, both off and online.