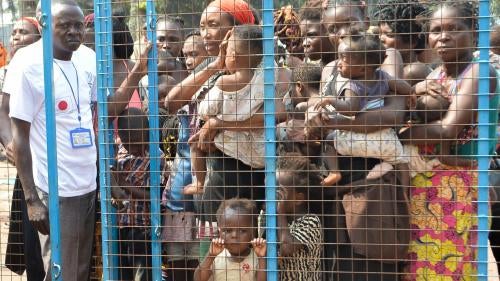 Angola registered significant progress on various fronts in 2018, as the political and civil rights environment became less restrictive, and the courts appeared to operate without political interference. Authorities continued to forcibly evict people without the necessary procedural protections or the provision of alternative housing or adequate compensation.

Security forces were implicated in extrajudicial killings and other serious human rights violations. The lesbian, gay, bisexual, and transgender (LGBT) movement celebrated the legalization of the country’s only gay rights lobby group. President João Lourenço launched an anti-corruption campaign that led to the arrest and investigation of several former government and ruling party officials, including relatives of former President Jose Eduardo Dos Santos.

Angolan security forces were implicated in several cases of extrajudicial killings of young men suspected of crimes. In June, footage recorded by a woman who said she witnessed an incident of extrajudicial killing showed an agent of the Angola Criminal Investigation Service (SIC) firing several shots at a criminal suspect. On June 1, the Angolan Ministry of Interior confirmed the incident recorded on the video, condemning the action as “ignoble” and pledged to take disciplinary actions against the agents.

Earlier in February, investigative journalist and human rights activist Rafael Marques published a report documenting over 50 cases of extrajudicial executions by Angolan security forces. In response, the government promised to investigate. The outcome of the investigations, if any, have not been made public.

Angolan police continued to arbitrarily arrest peaceful protesters and activists. On February 3, police arrested and accused five men of plotting to kill the deputy president, Bornito de Sousa, after they parked their car near his official residence.

On August 10, police arrested 13 separatists agitating for the independence of the oil-rich enclave of Cabinda, during a meeting in Cabinda to organize a public debate on the enclave's autonomy. A week later, a court acquitted the group of charges of crimes against state security, ruling that the meeting was not illegal.

Angolan authorities continued to forcibly evict people without the necessary procedural guarantees or the provision of alternative housing or adequate compensation. In May, Human Rights Watch wrote a letter to the president urging him to stop the forced evictions. In response, the Ministry of Justice claimed that evictions in Angola only occur in a judicial manner and that the government had made efforts to properly resettle residents who have built housing units in state's land reserves. However, Human Rights Watch has documented cases that contradict the government. For example, on July 4, police fired live bullets against residents of a neighborhood in Viana, in the capital, Luanda, during a protest against demolitions, killing a pregnant woman. Four other people were injured by bullets allegedly fired by police. According to Angolan nongovernmental organization SOS Habitat, on August 1, police shot and wounded an 18-year-old man and detained four people without charge during a peaceful protest against house demolitions in Viana.

Freedom of Media and Expression

On July 6, a court in Luanda acquitted investigative journalist Rafael Marques and the editor of weekly paper O Crime, Mariano Bras, on accusations of insulting the state, a ruling that was considered a huge victory for press freedom in a country where media have often been the target of government repression. The two journalists had been charged on June 21, 2017, with “outrage to a body of sovereignty and injury against public authority,” under Angola’s Law on Crimes against State Security, after publishing an article about an alleged illegal land acquisition involving the attorney general, João Maria de Sousa. State prosecutors could not convince the court that the journalists acted in bad faith and violated the ethical principles of journalism.

Despite this ruling, Angolan journalists continued to work under a repressive media law signed in January 2017, introduced by the administration of former President Dos Santos. In response to Human Rights Watch’s concerns over the law and defamation clauses, the Angolan government said in a July 18 letter that the limitations imposed by the law only intend to protect the interests, honor, and good name of citizens who have been affected, and it cannot be interpreted that the government has the intention to violate or restrict the right to freedom of expression.

In June, the Angolan government gave legal status to Iris Angola, the country’s only gay rights lobby group, which was established in 2013. Iris Angola has often complained that its members face discrimination accessing health and education services, mainly because of the lack of recognition from the state institutions. The group called the decision an “historic moment” that will allow the organization to defend the rights of homosexuals in Angola. Angola is currently revising its penal code and may scrap the article that characterizes homosexuality as “vices against nature.” The country inherited the penal code from the colonial era but there are no public records of law enforcement reinforcing the homosexuality laws.

In September, the Angolan Ministry of Health organized a meeting in Luanda to discuss the country National Strategy for HIV, with a special focus on the LGBT community.

Angola law enforcement delivered the first results of the anti-corruption campaign launched by President Lourenco, with several officials linked to former president Dos Santos being arrested and investigated. On September 19, the Supreme Court ordered that Norberto Garcia, the former spokesman of the ruling MPLA party and former director of the defunct Technical Unit for Private Investment, a state institution, be placed under house arrest in Luanda. He was charged with fraud, money laundering and document falsification in March 2018. The case dates back to November 2017 when Garcia and six foreigners were said to have tried to set up a fake state project worth US$50 million.

On September 21, former transport minister Augusto Tomas was arrested on charges of embezzlement and corruption. On September 24, Jose Filomeno dos Santos, son of former President Dos Santos and the former head of Angola's sovereign fund, was arrested in Luanda, on accusations of misappropriation of $1.5 billion of public funds. His business partner¸ Jean-Claude Bastos de Morais, was also arrested on a charge of misappropriating over a $500 million, with the help of the former governor of the National Bank of Angola, Valter Filipe, who is under investigation.

In October, Angola expelled over 400,000 largely Congolese migrants, who thereafter sought refuge mostly in the Kasai, Kasai Central, and Kwango provinces of the Democratic Republic of Congo. The mass expulsion was a result of “Operation Transparency,” reportedly aimed at reducing diamond smuggling, as part of President Lourenço‘s drive to diversify the economy. Angolan authorities said the smuggling and illegal mining were organized and controlled by “irregular migrants,” with no evidence to back up this claim. Many Congolese migrants targeted in the operation accused the Angolan forces of killing dozens of people, burning down homes, looting property, and using excessive force. They also described an environment of fear and intimidation following the expulsion.

In June, then-United Kingdom Foreign Secretary Boris Johnson revealed on Twitter that Angola had expressed interest in joining the Commonwealth. He welcomed the decision and President Lourenço’s commitment to long-term reform, tackling corruption, and improving human rights. In August, the International Monetary Fund (IMF) confirmed that Angola had requested talks on a bailout in return for more structural reforms. The IMF did not specify if the reforms would include human rights and rule of law. Also in August, President Lourenço visited Germany, where he reiterated his country’s plans to purchase German warships. The Berlin visit agenda was mostly focused on business, but German Chancellor Angela Merkel offered to assist Angola’s reform process.

In September, UN Secretary-General António Guterres held a meeting with Lourenço during the Forum on China-Africa Cooperation (FOCAC) in Beijing. During the meeting, Guterres highlighted the role of Angola in the effort to maintain peace and stability in Southern Africa and the Great Lakes region.