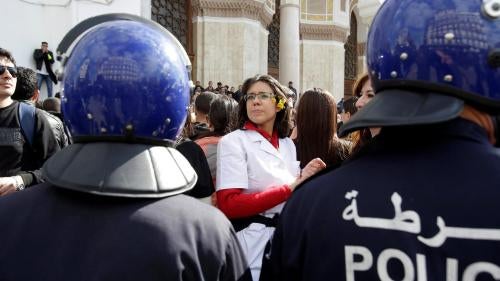 2018 saw no overall improvement in human rights conditions in Algeria. Authorities curtailed free speech and the rights to freedom of association, assembly, and peaceful protest, and arrested and prosecuted bloggers and human rights activists under various charges such as “inciting an unauthorized gathering,” “intelligence with a foreign country,” and defamation of public officials. Authorities also deported thousands of migrants without due process, and prosecuted members of the Ahmadiyya religious minority on charges related to the exercise of their religion.

Authorities continued to block the legal registration of Algerian human rights nongovernmental organizations and maintained its non-acceptance of country visits requests from several United Nations human rights experts and mechanisms, such as the special rapporteurs on torture and on freedom of peaceful assembly and of association, and the UN Working Groups on Enforced or Involuntary Disappearances and on Arbitrary Detention.

Authorities continued to routinely violate the right to freedom of assembly. The penal code punishes organizing or participating in an unauthorized demonstration in a public place with up to one year in prison (article 98).

A court in the city of Ghardaia in October 2017 filed various charges against six human rights and political activists for protesting in front of the courthouse the trial of a human rights lawyer in 2016. On June 26, the court acquitted them of all the charges.

Throughout August and September, the authorities blocked meetings planned for Algiers, Constantine, and Bejaia organized by the Mouwatana movement, a group that presses for democratic reforms and opposes a fifth term for President Abdelaziz Bouteflika.

A 2012 law on associations, requires associations, even if they have successfully registered previously, to apply anew for a registration receipt from the Interior Ministry in order to operate legally.

On February 27, 2018, Algerian authorities sealed the premises of two women’s rights associations, the Feminist Association for Personal Development and Exercise of Citizenship (Association Fèministe pour l’Epanouisement de la Personne et l’Exercice de la Citoyennetè, AFEPEC) and Algerian Women Claiming their Rights (Femmes Algériennes Revendiquant leurs Droits, FARD), on the pretext that they were not registered. Authorities had issued neither a receipt for their re-registration, leaving them in legal limbo. A week later, authorities provisionally permitted the organizations to resume work. On May 20, an administrative court ordered the governor to issue FARD a registration receipt, which it did in September 29.

On June 21, an appeals court in Bejaia sentenced blogger Merzoug Touati to seven years in prison for incitement to an illegal gathering, for urging public protests against a new finance law, and for “intelligence with a foreign country aiming at harming Algeria.” The latter charge relates to an interview he published with an Israeli government spokesperson. Touati has been held since January 22, 2017, in Oued Ghir prison in Bejaia.

The appeals court in Relizane, on June 6, upheld a two-year prison sentence against blogger Abdullah Benaoum for social media publications accusing the authorities and the Algerian army of being responsible for several massacres of civilians and the disappearance of thousands during the internal armed conflict of the 1990s. The charges were based both on penal code articles prohibiting the defamation of public institutions and article 46 of the Charter for Peace and National Reconciliation, which prohibits exploiting the wounds of the “‘National Tragedy’ to harm the institutions of Algeria” or tarnish its image internationally. Benaoum was serving his term at time of writing.

On August 7, 2018, a court in Ghardaia sentenced Salim Yezza, a blogger and member of the Rally for Amazigh in France, to a suspended one-year prison term on charges of inciting a public gathering and disseminating calls to hatred and discrimination for a Facebook post he wrote in 2014 criticizing government discrimination against the Mozabites, who are part of Algeria’s Amazigh ethnic population. Authorities arrested Yezza on July 14 at the Biskra airport as he was returning to Paris after a visit. He spent three weeks in prison before being released.

While Algeria’s 2015 law on domestic violence criminalized some forms of domestic violence, it contained loopholes that allow convictions to be dropped or sentences reduced if victims pardon their perpetrators. Despite some amendments in 2005 that improved women’s access to divorce and child custody, Algeria’s Family Code still discriminates against women by requiring them to apply to the courts for a divorce on specified grounds whereas men have a unilateral right to divorce without explanation.

Article 326 of the penal code allows a person who abducts a minor to escape prosecution if he marries his victim. The penal code does not define rape but does refer to it as an attack on honor. During Algeria’s fourth periodic review of its obligations under the International Covenant on Civil and Political Rights, the UN Human Rights Committee in July 2018 recommended that Algeria amend its penal code to include a comprehensive definition of rape, repeal article 326, and remove the pardon clauses in the domestic violence law.

Algeria continues to prosecute members of the Ahmadiyya religious minority for the exercise of their faith. More than 315 Ahmadis stood trial between June 2016 and March 2018. Sentences ranged from fines to a year in prison. Authorities frequently discriminate against the Ahmadi community of about 2,000 adherents, prosecuting members of the group for denigrating the dogma or precepts of Islam; participating in an unauthorized association; collecting donations without a license and possessing and distributing documents from foreign sources threatening national security.

Since at least December 2016, Algeria has rounded up and expelled en masse thousands of Sub-Saharan migrants, including women and children. In 2018, Algerian authorities continued to raid areas where migrants are known to live, arresting them on the streets or on construction sites, bussing them south and then expelling them at the border with Niger or Mali, in most instances with no food and little water.

Authorities prohibited the Algerian League for the Defense of Human Rights and other associations that have denounced the arbitrary deportations of migrants, from holding an annual National Meeting of the Migratory Platform, set to take place on July 20 and 21 in Oran, because authorities alleged they had no authorization to organize a public event. Algerian NGOs founded the platform in 2015 to enhance the protection of migrants.

Same-sex relations are punishable under article 338 of the penal code by up two years in prison. At a press conference in September during a visit by German Chancellor Angela Merkel, a journalist asked Prime Minister Ahmed Ouyahia about the rights of homosexuals. Ouyahia replied that “Algerian society has its own traditions, which will continue to evolve according to its values.”

During the armed conflict of the 1990s, the security forces, allied militias, and armed Islamist groups battling the government killed more than 100,000, according to estimates, and forcibly disappeared several thousand whose fate remains unknown.

The 2006 law implementing the Charter on Peace and National Reconciliation granted legal immunity to perpetrators of grave abuses. It also criminalized acts of speech that “denigrate” state institutions or security forces in relation to their conduct during that conflict.

The law promised compensation for families of "disappeared" persons but brought them no closer to learning what happened to their missing relatives.

As part of its fourth periodic review, the UN Human Rights Committee in July 2018 recommended that Algeria open serious investigations into forced disappearances, halt arbitrary and summary expulsions of migrants and refugees, and allow more freedom of speech, association, and religion.

In April 2018, the UN committee that reviews compliance of states with the International Convention on the Protection of the Rights of All Migrant Workers and Members of Their Families recommended that Algeria prohibit collective expulsions and deportations of migrants and members of their families. It also recommended that Algeria ensure migrants facing deportation the right to challenge the measure.