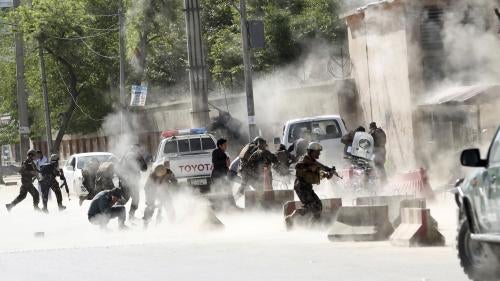 As military operations by insurgents, international, and government forces in Afghanistan intensified in 2018, insurgent attacks in urban areas sharply increased. The widening armed conflict killed or injured more than 10,000 civilians between January and December. Insurgents targeting civilians and carrying out indiscriminate attacks were responsible for the vast majority of these, but an increase in airstrikes by US and Afghan forces also caused hundreds of civilian casualties during the year. Neither the US nor the Afghan governments conducted adequate investigations into airstrikes that represented possible war crimes.

Although the Afghan government acceded to the United Nations Optional Protocol to the Convention against Torture in April 2018, it failed to hold police and National Directorate of Security (NDS) personnel accountable for systematic torture, extrajudicial executions, and enforced disappearances. Entrenched impunity for perpetrators of violence against women meant that girls and women still rarely saw justice in courts, as prosecutors and police pressured them to accept mediation rather than prosecution of their assailants. For the first time since 2002, the number of children in school fell; 60 percent of Afghan girls were not in school during the year.

Widespread violence marked preparations for the October parliamentary elections, with insurgents carrying out numerous attacks on candidates and facilities used for voter registration, including schools. Targeted attacks on voters, roadways, and poll facilities on election days killed or injured over 400 civilians. Evidence of fraud and vote-buying undermined the credibility of the parliamentary elections, and cast doubt on prospects for credible presidential elections in 2019. The worst drought in decades and the deportation of thousands of Afghans from Iran added to the hundreds of thousands internally displaced by conflict, taxing existing humanitarian aid resources. 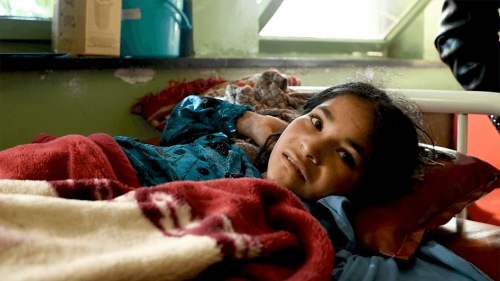 Dasht-e Barchi, a predominantly Shia neighborhood of western Kabul, suffered multiple attacks during 2018: on August 15, a bombing at a university preparatory course killed 34 and injured 70, many of them children; on September 6, twin bombings at a sports club in Kabul killed at least 20 civilians. ISKP also increasingly attacked humanitarian and healthcare facilities: a suicide attack on January 24 on the Save the Children office in Jalalabad killed six civilians and injured 27; an attack on a midwife training school on July 28 killed three; and a July 31 attack on the Nangarhar province’s refugee office killed 13. ISKP also targeted media: on April 30, a suicide bomber posing as a cameraman blew himself up among journalists who were reporting on an earlier suicide attack, killing nine. Two Tolo TV news reporters covering the September 6 bombing in Dasht-e Barchi were killed by a second suicide attack.

The Taliban claimed to target only Afghan government and foreign military facilities, but they used indiscriminate means that killed and injured hundreds of civilians. In the deadliest incident, on January 28, 2018, a Taliban car bomb disguised as an ambulance killed over 100 in Kabul. A Taliban attack on a NATO convoy in Kandahar on April 30, killed 11 children at a nearby school. The Taliban were believed to be responsible for a car bomb near a sports facility in Lashkar Gah, Helmand province, that killed 15 civilians and injured 40 on March 23. That incident launched the Helmand Peace March, a group of survivors and relatives of victims of suicide bombings and airstrikes who began walking across Afghanistan, stopping in cities along the way, to call for an end to the war. As of November, they had reached Mazar-e-Sharif, more than 500 kilometers from where they had started.

Air operations by US forces and the Afghan Air Force (AAF) killed and injured over 600 civilians. On April 2, AAF helicopters strafed a madrasa graduation ceremony in northern Kunduz province, killing 30 children and injuring 51. An airstrike in Chardara district, Kunduz province in July, reportedly killed 14 members of one family, including five women and seven children aged 2 to 14. The US conducted only internal reviews of a limited number of incidents of civilian casualties, and did not carry out site visits or interview witnesses. The Afghan government carried out few internal reviews of incidents causing civilian casualties. During a six-day Taliban assault on Ghazni city, both insurgents and government security forces launched indiscriminate attacks in densely populated areas, killing and injuring more than 300 civilians.

On April 30, unidentified gunmen shot dead Ahmad Shah, a BBC reporter in Khost, who had written critical articles about the CIA-controlled Khost Protection Force, a counterinsurgency militia that operates under CIA control. No one was held accountable for any of these killings.

Both the Taliban and ISKP carried out attacks on election facilities and threatened election staff. On April 22, an ISKP suicide bomber killed 69 and injured 138, many of them women and children, at a voter registration center in the predominantly Shia neighborhood of Dasht-e Barchi. An ISKP bombing at a voter registration center in Khost killed at least 14 civilians on May 6. On July 1, ISKP attacked a delegation from the minority Hindu and Sikh communities that was meeting the governor in Jalalabad, killing 19—10 from Afghanistan’s Sikh community, including the sole Sikh parliamentary candidate.

On April 18, as voter registration began across Afghanistan, the Taliban issued a statement denouncing the elections and warning people not to participate. The UN Assistance Mission to Afghanistan (UNAMA) reported that on April 23, Taliban officials in Alishang district, Laghman province, warned community elders that anyone who registered to vote would face serious consequences. However, the elders told the Taliban not to interfere in the process. On May 3, Taliban forces in Mardyan district, Jawzjan province, abducted and threatened to kill 20 election staff members, releasing 17 after they agreed not to work on the elections. The fate of the other three was unknown at time of writing.

There were multiple attacks by the Taliban across Afghanistan on the election days of October 20-21, which killed and injured more than 400 civilians.

Entrenched impunity for perpetrators of violence against women continued. Police routinely refuse to register cases, instead telling women who have been the victims of domestic violence to return to their husbands. In May 2018, UNAMA reported that even cases of murder and rape often never reach the courts. Afghan authorities routinely turn victims away or pressure them to accept mediation, a process in which the abuser merely promises not to repeat the crime. UNAMA also reviewed murders of women in so-called honor killings; the vast majority of these were never prosecuted but instead settled through mediation.

Despite a 2016 pledge from President Ashraf Ghani to end the imprisonment of women accused of running away from their families, in 2018 Afghan police and prosecutors continued to jail women and girls for “moral crimes” that include “running away” from home, and committing or attempting to commit zina (sex outside of marriage).

Women with disabilities in Afghanistan face formidable obstacles gaining access to education and health care. In interviews with Human Rights Watch in March and June 2018, women with disabilities reported being sexually harassed when seeking assistance from the Ministry of Labor, Social Affairs, Martyrs and Disabled. Although the ministry offered limited financial assistance to those injured in the conflict, psychosocial services for survivors or people with disabilities are extremely limited.

A June 2018 report by the Afghanistan Independent Human Rights Commission noted that while Afghanistan had ratified the UN Optional Protocol on the Convention against Torture, enacted legislation criminalizing torture, and established a government commission on torture, the government had not significantly reduced torture since it assumed office in 2014, and did not prosecute any senior officials accused of torture.

On July 22, First Vice President Abdul Rashid Dostum returned to Afghanistan after more than a year abroad evading charges on the abduction, illegal imprisonment, and sexual assault of a rival Uzbek politician, Ahmad Ishchi. Although a Kabul criminal court, in 2017, convicted seven of Dostum’s bodyguards in absentia of sexual assault and illegal imprisonment, and sentenced them to five years in prison, none had been imprisoned at time of writing.

A report by Integrity Watch Afghanistan in late 2017 documented inhumane conditions in Afghan prisons and detention centers, with severe overcrowding and insufficient toilets, potable water, mattresses, and other facilities. Through the first half of 2018, prisoners in Pul-e-Charkhi prison carried out a hunger strike to protest conditions. The situation remained particularly poor for female prisoners, many of whom have been imprisoned for so-called morality crimes and who are often imprisoned with their children, far from home.

In Afghanistan, same-sex relations are punishable by 5 to 15 years in prison under a law that bans all sex between unmarried individuals.

Access to and Attacks on Education, Military Recruitment of Children

According to UNAMA, in 2018 schools and mosques used for voter registration were the target of dozens of attacks by insurgents, particularly ISKP.

On May 2, 2018, Taliban officials in Shrana district, Paktika province, warned teachers that they would target schools used for elections purposes. As of October, many schools in the district remained closed. In June in Nangarhar province, ISKP forced 80 girls’ schools to close in retaliation for US and AAF airstrikes; some schools remained closed during the October 20 elections. The group also attacked the provincial education office in Jalalabad on July 11, 2018, killing 11 and injuring 17. In March 2018, the Taliban closed 29 schools in Logar province in retaliation for an attack by pro-government militias on one of their commanders’ houses. Although the government, in 2016, criminalized military recruitment of Afghans under 18 years old, the practice continued, notably among the Afghan Local Police (ALP) and pro-government militias. UNAMA also documented recruitment of child soldiers by ISKP and Taliban.

A June 2018 UNICEF report found that for the first time since 2002, the number of Afghan children in school was falling, with girls most affected. Up to 3.7 million children in Afghanistan—nearly half the children in the country—are out of school, compared with 3.5 million in 2016, 60 percent of them girls. In many provinces, fewer than 15 percent of students are girls.

Government and insurgent forces also continued to use schools for military purposes.

Under the Trump administration’s South Asia strategy, announced in 2017, US troop levels increased to 15,000, including an elite brigade of 800 military advisers who deployed with Afghan forces in March. The US expanded airstrikes and covert drone attacks, releasing over 5,000 bombs and missiles in Afghanistan between January and November, the highest number since 2011.

The US agreed for the first time to participate in direct talks on a peace settlement with the Taliban; a meeting between Taliban officials and Alice Wells, US principal deputy assistant secretary for South and Central Asia, took place in Doha in July.

Although President Ghani told donor countries in 2017 that the torture and rape case involving Vice President Dostum was a make-or-break challenge for his government to demonstrate that it would prosecute officials accused of human rights violations, only Norway and the European Union issued statements about the need to conclude proceedings against Dostum after he returned to Kabul but faced no legal consequences.

In December 2017, the European Parliament expressed concern about the deteriorating security situation in Afghanistan, and called on governments to refrain from repatriating Afghans. In May 2018, the EU deployed a team of international police experts to work with Afghanistan’s Ministry of Interior Affairs and National Security Council staff.

The actions of Australian special forces who served in Uruzgan province in 2006-2013, came under investigation by a special war crimes inquiry headed by New South Wales Supreme Court Judge Paul Brereton. The alleged crimes include summary executions and abuses against Afghan civilians.

In November 2017, the prosecutor of the International Criminal Court (ICC) had asked the court’s judges for permission to open an investigation into possible war crimes and crimes against humanity committed by the Taliban, Afghan government forces, and US forces since May 1, 2003, when Afghanistan became a member of the court. On September 10, the US threatened to punish individuals who cooperated with the ICC in a potential investigation of US wartime actions in Afghanistan.