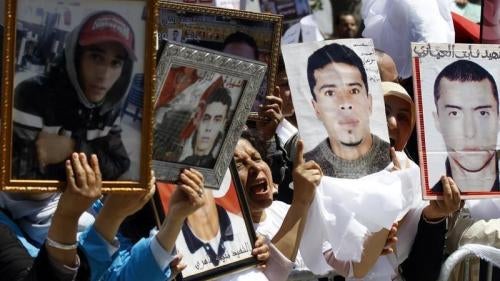 Tunisia achieved significant progress in strengthening human rights protections following the adoption of a new constitution on January 26, 2014, three years after the uprising that toppled President Zine el Abidine Ben Ali. The first national parliamentary elections since the 2011 uprising, held in October, resulted in victory for the modernist party Nidaa Tounes, with 86 out of the 217 seats of the Assembly of the Peoples’ Representatives.  The new authorities will need to undertake a thorough overhaul of existing laws, reform public institutions, and implement constitutional guarantees to address deficiencies in the current protection of human rights.

The year 2014 saw important reforms, including the adoption of new laws to combat torture and the establishment of a truth commission into past human rights abuses. In contrast, the lenient sentences that the military appeals court passed on former officials and police responsible for killings of protesters during Tunisia’s 2011 uprising sent the wrong message about accountability.

The 2014 constitution guarantees key civil and political, as well as social, economic, and cultural rights. These include the rights to citizenship; to freedom of expression and association, including the right to form political parties; to freedom of assembly and movement; and to bodily integrity and fair trial and freedom from arbitrary detention and torture. The right to political asylum is also guaranteed, as are rights to health, education, and work. The Tunisian authorities still need to amend existing laws or adopt new ones and institute other reforms to realize these rights.

The new constitution contains several weaknesses and ambiguities that could be used to suppress rights. For example, it contains a provision prohibiting “attacks on the sacred,” which could be used to prosecute statements that the authorities consider “defamatory” of religion or religious beliefs, contrary to the freedom of expression guarantee contained in article 31.

The constitution fails to abolish the death penalty, although Tunisia has maintained a moratorium on executions since the early 1990s.

Several provisions of the penal code and the code of criminal procedure appear to contradict rights guarantees contained in the new constitution, such as that affording detainees the right, following arrest, to have access to legal representation. The code of criminal procedure continues to permit a detainee to have legal representation only when they are taken before an investigative judge.

In 2014, there were fewer incidents of prosecutions for alleged defamation or “insult” of state officials and on charges of “harming public order” or “public morals.”

In July, the head of government temporarily suspended two radio stations, accusing them of having links to terrorism and propagating hate speech, the day after an attack by armed men on July 16 killed 15 Tunisian soldiers near the border with Algeria. The government’s action ignored the 2011 decree-law 116 on audiovisual media, which gives the High Independent Authority for Audiovisual Communications sole authority to suspend or otherwise sanction a media outlet.

In April, the government withdrew the reservations that Tunisia entered when it ratified the Convention on the Elimination of All Forms of Discrimination against Women (CEDAW). These reservations had enabled Tunisia to opt out of certain CEDAW provisions, including provisions on women’s rights within the family, even though it had ratified the treaty.

Tunisia maintained, however, a general declaration that it had made in relation to CEDAW, indicating that it would not take “any organizational or legislative decision in conformity with the requirements” of the convention if that should conflict with chapter 1 of the Tunisian Constitution, which declares Islam the state religion of Tunisia.

Tunisia has a personal status code that gives women greater rights within the family than those allowed by other states in the region, but the code retains some discriminatory provisions. These deny women an equal share with men of any inheritance and prohibit a mother who has remarried, unlike remarried fathers, from having her children reside with her.

Since 2011, Tunisian authorities have taken some steps to prosecute perpetrators of human rights violations, notably those committed during the uprising that began on December 17, 2010, and ended in February 2011. An official investigation concluded that the authorities’ attempt to crush the uprising using excessive force caused the deaths of 132 protesters and injuries to hundreds more.

The trials of those accused of responsibility for these killings began in late 2011 before military courts, which have sole jurisdiction over cases involving members of the military and security forces. First instance military courts that began investigations in July 2011 determined that the accused should stand trial in groups, organized geographically, and trials opened in the military tribunals of Tunis and Le Kef in November and December 2011.

Defendants included the former president, charged in absentia, two former interior ministers, five general directors of the Interior Ministry, and several high-level and mid-level security force commanders. When the tribunals delivered their verdicts in June and July 2012, they convicted President Ben Ali, his interior minister at the time, and five directors of the Interior Ministry and imposed prison sentences ranging from 15 years to life. On April 12, 2014, the military court of appeals confirmed the life imprisonment sentence in absentia of former president Ben Ali but significantly reduced the sentences of all other former senior officials.

After reviewing the trials and the proceedings of the military court of appeals, Human Rights Watch concluded that the military courts had largely respected the rights of the defendants but had faced serious obstacles that prevented their ensuring full accountability for unlawful killings and other serious rights abuses committed during the 2011 uprising.

These included the failure of prosecuting authorities to obtain sufficient evidence to identify the individual perpetrators of unlawful killings and other crimes, and the lack of a provision in the penal code or other legislation making senior officers liable for crimes committed by forces under their command. The government’s failure to press effectively for Ben Ali’s extradition from Saudi Arabia to stand trial in Tunisia also undermined accountability.

On December 24, 2013, the National Constituent Assembly (NCA) adopted the Law on Establishing and Organizing Transitional Justice. The law sets out a comprehensive approach to addressing past human rights abuses. It provides criminal accountability via the creation of specialized chambers within the civil court system to adjudicate cases arising from past human rights violations, including abuses committed by military and security forces.

The law also provides for the establishment of a Truth and Dignity Commission tasked with uncovering the truth about abuses committed in the period since Tunisia’s independence in July 1955 through to 2013. The NCA elected 15 of the commission’s members on May 15, 2014. The December 2013 law also establishes mechanisms for victim reparation, institutional reform, vetting of civil servants, and national reconciliation.

On June 24, Minister of Interior Lotfi Ben Jeddou told a press conference that a total of at least 2400 Tunisian armed militants had joined the conflict in Syria, mostly as fighters for the Al Nusra Front and the extremist group Islamic State, also known as ISIS. He made the announcement following the publication on Facebook of a video and photographs in which a man who identified himself as Tunisian appeared to participate in the summary killing of five captured Iraqi border guards.

In July, the government ordered 157 associations to suspend their operations, accusing them of having links to terrorism following an attack by armed men that killed 15 Tunisian soldiers near the country’s border with Algeria. The government’s action breached decree-law 2011-88, which the transitional government had adopted in September 2011 to replace a restrictive law that criminalized participation in officially unrecognized associations, bringing Tunisia’s national law into conformity with its international law obligation to uphold freedom of association.

Decree-law 2011-88 gives the judiciary sole authority to order the suspension or dissolution of an association under a three-stage process of warning, then initial suspension for 30 days, followed by dissolution if the association fails to take corrective action. The government’s suspension of 157 organizations in July 2014 ignored this process and took the form of a unilateral administrative decision. The associations appealed the government decision before the administrative tribunal.

In practice, the judiciary lacks independence from the executive branch and still labors under the legacy of the Ben Ali era, when the authorities used the judicial system as an instrument to suppress dissent. The new authorities have yet to reform law 67-29 of July 14, 1967, which places judges under the effective control of the minister of justice, who used his powers in 2012 to summarily dismiss 75 judges for alleged corruption or links to the Ben Ali regime. The Ministry of Justice has since rejected an administrative tribunal order to reinstate the dismissed judges.

Torture and other ill-treatment reportedly remained common in detention facilities and prisons, despite the NCA’s adoption on October 9, 2013, of a law to create a National Authority for the Prevention of Torture and Other Cruel, Inhuman or Degrading Treatment or Punishment. A year later, however, the NCA had yet to vote on the appointment of the National Authority’s members.

Following his second visit to Tunisia since the revolution, in June the special rapporteur on torture, Juan Mendez, said that the eradication of torture in Tunisia required both political will and institutional, legal, and cultural reforms to strengthen safeguards against torture and to rebuild citizens’ trust in the judicial and security apparatus.

Since the January 2011 revolution, several United Nations agencies and foreign governments have committed to support Tunisia’s transition, focusing on technical and financial assistance to Tunisia’s economy and private sector, security sector support, and support for civil society and democratic practices. In 2014, the United States approved a sovereign loan guarantee to Tunisia of US$500 million. The International Committee of the Red Cross, the UN Development Program, and the European Union provided support in 2014 for security sector and judicial reform programs.