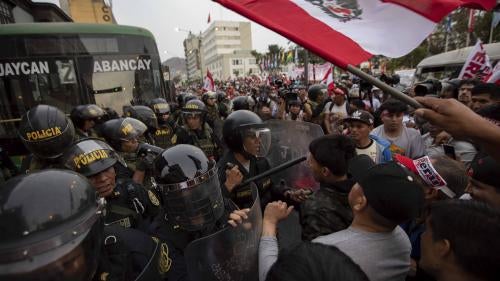 On December 7, then-President Pedro Castillo announced the temporary dissolution of Congress and the “reorganization” of the judiciary, in what was effectively an attempted coup. In response, Congress approved Castillo’s removal and Vice President Dina Boluarte assumed the presidency. At least 22 people were killed during protests calling for early elections.

Then-President Pedro Castillo decreed at least four states of emergency in 2022, suspending basic rights and deploying armed forces on streets and highways, supposedly to fight crime and respond to a strike. Peruvian rules for use of force by security forces do not comply with international standards.

Congress replaced six of the seven members of the Constitutional Court in May through a selection process that lacked sufficient transparency.

Earlier in the year, the court issued several rulings that were inconsistent with international human rights standards, including on same-sex marriage, Indigenous rights, and justice for crimes against humanity.

Threats to freedom of expression and violence against women and defenders of environmental and Indigenous rights remain major concerns.

Rule of Law and Judicial Independence

Prosecutors opened six investigations into alleged corruption and other crimes against Pedro Castillo while he was president, as well as against his relatives and members of his administration. In October, the attorney general charged the then-president and two former cabinet members with belonging to a criminal organization, influence peddling and collusion.

The attorney general accused the Castillo administration, in August, of “constant obstruction” of investigations against the president. Then-President Castillo called those investigations politically motivated.

In July, a former interior minister said the then-president dismissed him after he created a police unit to work with prosecutors investigating corruption in his administration. He was in office for two weeks.

In September, the head of the National Police Search Unit, who led a search in the presidential palace as part of a corruption investigation, was removed, a decision that the chief anti-corruption prosecutor viewed as retaliatory. In response to criticism, the administration reinstated him.

Multiple members of Congress and the runner-up in the 2021 presidential election, Keiko Fujimori, are also under investigation on various criminal charges, including related to alleged corruption.

Congress was scheduled to vote on Castillo’s removal on the afternoon of December 7. He had survived two earlier attempts to remove him from office, one late 2021 and the second in March 2022.  On the morning of the vote, Castillo announced the temporary dissolution of Congress and the “reorganization” of the judiciary, among other measures. Democratic institutions and civil society quickly rejected Castillo’s actions, most members of his cabinet resigned, and the armed forces issued a statement calling for respect for the constitution. Congress approved Castillo’s removal within the next few hours, and Vice President Dina Boluarte assumed the presidency the same day. Police detained Castillo and prosecutors charged him with rebellion and conspiracy. On December 16, a judge ordered 18 months of pretrial detention.

Thousands of protesters took to the streets calling for early elections. On December 14, President Boluarte declared a 30-day state of emergency that suspended some basic rights, such as freedom of association, allowed searches without a warrant, and deployed the armed forces to “support” the police in maintaining public order. The Ombudsperson’s Office reported 22 civilians were killed and more than 600 demonstrators and police officers injured during protests after Castillo’s coup attempt, as of December 30.

On December 20, Congress voted to hold elections in April 2024, instead of in 2026, as scheduled. The decision needs to be confirmed in a second round of voting in the next legislative session, after February 28, 2023.

The congressional committee leading the selection process for Constitutional Court members did not apply consistent evaluation criteria or ensure sufficient transparency and civil-society participation. The committee presented the full Congress with six candidates for six vacancies, preventing it from making a genuine selection. Congress approved them in May. The replacement of a seventh member remained pending, as of October.

Police used excessive force in Lima in 2020, during largely peaceful protests about the removal of President Vizcarra. Over 200 people were injured, and two protesters killed. The attorney general charged President Manuel Merino—the president of Congress who took over as President after Vizcarra’s removal—and his prime minister and interior minister with involvement in abuses. A congressional subcommittee, in June 2022, blocked the prosecution after approving a flawed report that ignored solid evidence of human rights violations during the protests.

Then-President Castillo issued disproportionate emergency decrees—in February, March, and April—suspending freedom of movement and assembly, permitting arbitrary home searches and arrests, and allowing deployment of the armed forces in Lima and neighboring Callao, supposedly to fight crime. An additional April decree suspended similar rights throughout the national road network, in response to a transportation workers strike. The states of emergency were no longer in effect as of September.

Congress passed a law in 2020 eliminating an explicit requirement that use of force be proportionate and granting police new protections against prosecution. Under Peru’s use of force rules, the police and armed forces cannot be held criminally responsible for causing injuries or even death “when fulfilling their constitutional duty” and using their weapons “in accordance with regulations.” In February 2022, the government approved state-of-emergency rules allowing police to request the armed forces to back them up, including by firing their weapons, when police “capacity,” during any operation, is “overwhelmed.”

In June 2022, then-Interior Minister Dimitri Senmache incorrectly told police officers that when “a criminal picks up a weapon, they lose the right to life.”

The Shining Path, other armed groups, or state agents killed or disappeared almost 70,000 people, Peru’s Truth and Reconciliation Commission estimates, during an armed conflict from 1980 to 2000. The vast majority of those killed were low-income farmers; most spoke Indigenous languages.

Authorities have made slow progress in prosecuting abuses by government forces during the conflict. As of September 2022, courts had issued 50 convictions in 92 cases, Peruvian human rights groups reported.

Former President Alberto Fujimori (1990-2000) was sentenced in 2009 to 25 years in prison for crimes against humanity and corruption. In 2017, then-President Pedro Pablo Kuczynski granted him a humanitarian pardon on claims of illness. The Supreme Court, in 2018, reversed the pardon, but the Constitutional Court reinstated it in March 2022. The Inter-American Court of Human Rights then ordered Peru not to release Fujimori, and authorities, as of September, were abiding by that.

In March 2021, prosecutors charged Fujimori and three former health ministers with the forced sterilizations of thousands of mostly poor and Indigenous women during his presidency. The case remains pending.

In February 2022, the Constitutional Court upheld a 2013 decision that the 1986 killing, by Navy officers, of 113 detainees was not a crime against humanity. The ruling allows the statute of limitations to apply to the officers, which could lead to closing ongoing trials.

Threats to freedom of expression remain a serious concern in Peru, as several journalists face prosecution for their work.

Peru’s penal code punishes defamation with up to two years in prison, violating international standards. Then-President Castillo’s allies in Congress introduced a bill, in August, to increase the sentence to up to four years.

Charges of defamation have repeatedly been used to stifle reporting in the public interest in Peru, the Committee to Protect Journalists said.

Since late 2018, journalists Paola Ugaz and Pedro Salinas have faced criminal prosecution for alleged defamation and other offenses in several cases in connection with their reporting on sexual abuse scandals involving a Catholic lay organization. In five of seven cases, courts dismissed the case or complainants withdrew them.

Similarly, former presidential candidate César Acuña filed a criminal complaint against journalists Christopher Acosta and Daniel Yovera, and publisher Jerónimo Pimentel, for defamation, after they reported on accusations of corruption against Acuña. A judge sentenced Acosta and Pimentel to two years in prison and payment of over US$ 100,000 in damages. Acuña later dropped the complaint, and the convictions were annulled.

Gender-based violence is a significant problem. The Ministry of Women reported 136 femicides, defined as the killing of a woman in certain contexts, including domestic violence, in 2021—and 75 between January and August 2022.

Women and girls can legally access abortions only when a pregnancy threatens their life or health. In 2014, the Ministry of Health adopted technical guidelines for legal abortions, but many health service providers have failed to implement them, creating barriers to access. As of September, Congress was discussing a bill recognizing the “right to be born,” which if approved, could become an additional obstacle to accessing a legal abortion.

In February, the UN Committee on the Elimination of Discrimination against Women urged Peru to fully decriminalize abortion and ensure effective investigations, prosecution, and punishment in gender-based violence cases.

In June, Congress passed a law mandating shared custody of children between divorced or separated parents, as a general rule. Rights groups warned that it violates children’s rights to safety, health, and well-being, and the rights of women, particularly those who are victims of domestic abuse.

In May, Congress passed a law granting parents’ associations discretion to approve or reject educational materials. The law enables the restriction of comprehensive sexuality and gender education in schools. A lawsuit against it remained pending as of September.

During the 2021 campaign, Castillo made disparaging comments about trans people and, once in office, appointed several ministers with a record of homophobic comments.

Same-sex couples are not allowed to marry or enter into civil unions. In 2021, certain courts recognized same-sex marriages contracted by Peruvians abroad. But in April 2022, the Constitutional Court ruled against recognizing any same-sex marriage abroad, by either Peruvians or foreigners.

An appeals court, in January, overturned a decision allowing trans Peruvians to change their name and gender marker on national identity documents. An appeal before the Constitutional Court remained pending as of September.

At least seven environmental defenders, including six Indigenous people, were killed from January through September 2022. Their communities believe they were killed because of their defense of the environment.

In 2019, the Ministry of Justice established an inter-agency mechanism for protection of human rights defenders, but communities and rights groups complain it is ineffective.

Peru signed the Escazú Agreement, a treaty promoting access to information and the protection of environmental defenders, in 2018, but Congress voted against ratification in 2020. A congressional commission rejected ratification again in July 2022.

The right to free, prior, and informed consent of Indigenous people about measures and projects that affect them is enshrined in Peruvian law, and the country has ratified International Labor Organization Convention 169, which also protects this right. Yet, in March, the Constitutional Court dismissed the right of consultation of the Puno Chila Chambilla and Chila Pucara Indigenous communities, arguing that the right is not “fundamental” because it is not spelled out in the constitution.

In January, an oil tanker transferring crude oil to a refinery spilled at least 11,900 barrels in the ocean, Peru’s government said. The spill reached at least 80 kilometers of coast, included protected areas, and affected the livelihoods of fishing and tourism workers, and other local residents, UN experts said.

As of June, the United Nations High Commissioner for Refugees reported more than 1.3 million Venezuelan migrants and asylum seekers in Peru. Peru had received more than 606,000 asylum requests from Venezuelans as of January, the Ombudsperson’s Office said, and had granted asylum to 4,125—less than 1 percent.

In August, then-President Castillo announced a program to expel migrants who “have come to commit crimes” in Peru.

A bill pending before Congress, as of September, would allow the government to limit the entry of foreigners for reasons of “national security, public health, internal order and public safety.”