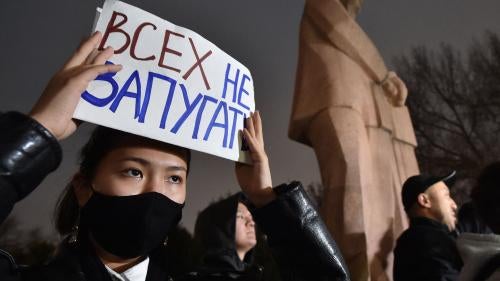 Despite promises to uphold human rights and freedoms, Kyrgyz authorities restricted critical voices and civil society throughout the year. There was a proposal to re-initiate the highly problematic draft “foreign agents” law along with harassment and smear campaigns against nongovernmental organizations (NGOs) and human rights defenders. Press freedom came under siege with a spate of criminal cases against independent journalists, bloggers, and media.

An overly broad law penalizing “false” information was applied twice without judicial oversight. In March, a blanket protest ban was introduced in Bishkek and extended until December. Custodial deaths remain a serious concern in Kyrgyzstan’s penal system. An effective and independent investigation into the death in custody of human rights defender Azimjon Askarov two years ago has yet to be completed. Measures put in place to protect women and girls have yet to end impunity for domestic violence, which is still the norm.

Kyrgyz citizens voted on a new parliament on November 28, 2021, following elections that monitors from the Organization for Security and Co-operation in Europe (OSCE) found to be competitive, albeit marred by limitations on civil and political rights, as well as significant procedural problems, during the vote counting. Widely considered to have been significantly weakened after the constitutional reform of 2021, the parliament was reduced from 120 to 90 members and stripped of some of its powers, making it dependent and vulnerable to pressure by the president, who now has the power to change election laws, as well as to initiate criminal investigations into members of parliament.

In August, President Sadyr Japarov signed a decree on the “Convocation of People’s Kurultai”—a traditional people’s council with delegates from all regions of the country. Members of the parliament have protested the decree, as it circumvented the requirement for the parliament to pass a law on the issue. Parliament rejected such a law in May.

In February, a member of the parliament suggested reconsideration of the previously rejected "foreign agents” draft law, arguing that foreign-funded NGOs are interfering with the work of the government. The suggestion was accepted by the parliament’s speaker for consideration. Both NGOs and independently funded media could be subjected to negative labeling that affects their legitimate activities.

In August, Karakol City Court acquitted Kamil Ruziev, head of the human rights NGO Ventus, of charges of forgery brought against him in 2020 by the State Committee on National Security (GKNB) in apparent retaliation for his efforts to bring to justice security service officers allegedly engaged in torture and other human rights violations against detainees. The prosecutor immediately appealed the decision.

In October, more than 20 people were detained and further placed in pretrial detention for two months after publicly disagreeing with the impending transfer of the Kempir-Abad dam to Uzbekistan as part of a broader demarcation deal with the neighboring country. Those detained included activists, human rights defenders, bloggers, and politicians.

In June and August, the Kyrgyz Ministry of Culture, the government agency responsible for implementing the widely criticized law on false information, blocked websites of two media outlets without judicial oversight. The website of ResPublica newspaper was blocked for two months in June, as was the website of the information agency 24.kg in August, based on complaints by private individuals regarding information published there. The website of 24.kg has been subsequently unblocked. In October, the ministry blocked the website of Azattyk Media for two months over a video on the Kyrgyzstan-Tajikistan border that cited Tajik authorities.

In March, Kyrgyz police raided the office of the privately owned opposition media channel Next TV and detained the outlet’s director, Taalaibek Duishenbiev, for the channel’s reposting of an article from a Ukrainian media that suggested Kyrgyzstan would provide military assistance to Russia for its invasion of Ukraine. The channel was instructed to qualify the post as “extremist.” In September, Duishenbiev was convicted of incitement of interethnic hatred and initially sentenced to five years of imprisonment, but his sentence was later commuted to a three-year probation that includes limitation on his movement.

In January, Kyrgyz police raided the office of Temirov Live, an independent investigative journalism outlet, detaining the channel’s principal investigator, Bolot Temirov, on charges of drug possession. The journalist and his colleagues claim the drugs were planted on him during the raid. Weeks before the raid, Temirov and his team had published an investigation into the GKNB’s leader, Kamchibek Tashiev, which implicated Tashiev in an alleged corruption scheme involving the export of state-produced fuel. In September, Temirov was acquitted on the drugs charges but, in response to an appeal by the prosecution, in November Bishkek city court ruled to expel Temirov, and he was deported to Russia.

In March, a blanket protest ban was introduced in the central district of Bishkek, which was later expanded to all districts of the capital. The ban was later extended until December. The decision was never made public; it became known after several activists were detained for protesting Russia’s invasion of Ukraine. Since then, any public display of symbols of either Ukraine or Russia has also been subjected to fines. The authorities provided an alternate, remote location for protests.

In June, the deaths in custody of political analyst Marat Kazakpaev and banker Bakyt Asanbaev were widely criticized and raised concerns over neglect and mistreatment. Both were in GKNB’s pretrial detention on separate charges. Kazakpaev died after several months of concern over his worsening health condition. Asanbaev was found hanged in his cell. A joint government-public investigative commission concluded that it was a “tragic coincidence.”

The National Center for Torture Prevention, Kyrgyzstan’s national prevention mechanism on torture, in June reported that over the past three years, at least 151 known cases of deaths have occurred in Kyrgyzstan's detention centers and prisons. Shortly after the center published its report, the UN Human Rights Office expressed concern at a proposal by deputy head of the cabinet, Edil Baisalov, to dissolve the center and transfer its powers to the office of the ombudsman of Kyrgyzstan. At time of writing, no further action on the proposal has been taken.

Human rights defender Azimjon Askarov, wrongfully imprisoned in 2010, had also died in custody in 2020 after being medically neglected. In September 2021, the GKNB was tasked with re-opening an earlier investigation into his death. The investigation has yet to be concluded.

Although Kyrgyzstan has taken important steps in recent years to tackle domestic violence, the rewriting of laws that occurred as part of the legal inventory instigated in 2021, following adoption of the new constitution, and reforms in the Criminal and Criminal-Procedural Codes, have largely undone these steps.

Cases of violence against women and girls remain underreported and survivors face multiple barriers to accessing services and justice, such as insufficient shelters and other essential services, dismissive response by authorities, stigma, and attitudes that perpetuate harmful stereotypes and practices, including by police, judicial officials, and government and religious leaders. Of great concern is the culture of impunity for violence against women and girls that appears to be widespread both among the public and law enforcement circles.

Although a May 2022 presidential decree increased the monthly social benefit payments to adults and children with disabilities, Kyrgyz authorities have largely ignored their human rights commitments to people with disabilities. A governmental council established to implement the Convention on the Rights of Persons with Disabilities failed to meet even once in 2022. There is a lack of affordable rehabilitation centers and there have been reports that families have to pay bribes to get a disability certificate—a prerequisite for receiving benefit payments—due to corruption within the system. An NGO-led pilot project integrating elements of inclusive education is currently implemented in 23 schools, focusing on modifying the school program to accommodate the needs of children with disabilities.

According to statistics from the Kyrgyz National Center for Torture Prevention, 1,422 complaints of torture were received in the first eight months of 2022. The center also reports that in 2021, more than 76 percent of those perpetrating torture and ill-treatment were police officers. Impunity for torture and ill-treatment remains the norm in pretrial detention centers, prisons, and closed institutions. Human rights defenders report that police officers incriminated in torture cases rarely receive penalties, cases are often quickly closed, and many police officers are acquitted.

Conflict at the Kyrgyzstan-Tajikistan Border

In September, a four-day border clash between Kyrgyz and Tajik border guards injured 206 people and killed at least 62 people, including a 15-year-old girl who was reportedly hit by a shell fragment. At least one school was attacked and burned by Tajik-affiliated forces. To date there has been no impartial investigation by authorities of either country into whether its military violated the laws of war during a similar 2-day conflict in 2021 conflict, in which over 40 people died.

In April, the UN Working Group on discrimination against women and girls expressed concern at the end of a country visit about the increase in the number of gender-based violence cases and the continued impunity for perpetrators of violence against girls and women. The Working Group urged Kyrgyzstan to accelerate prompt and adequate investigation of all cases of violence against women and girls, and to provide the survivors access to redress.

In June, the UN special rapporteur on extreme poverty urged the authorities to invest more in pre-primary education, improve the quality of schools, and strengthen its social protection system for persons in poverty, as well as tackle the problem of corruption.

In September, during its annual Human Rights Dialogue with the Kyrgyz Republic, the European Union expressed concern over the shrinking space for civil society and the implementation of the law on false information. The EU also flagged its concerns on reports of deaths in detention and over the absence of a transparent investigation into the death in detention of human rights defender Azimjon Askarov.

In November, the UN Human Rights Committee voiced concern about reports of government pressure on human rights defenders, lawyers, politicians, journalists, and others for expressing their opinions, particularly those critical of the government, including the criminal prosecution of bloggers and journalists.