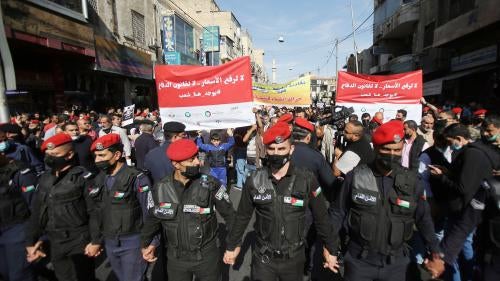 In 2022, Jordanian authorities removed regulations and safety measures taken in response to the Covid-19 pandemic but did not rescind a state of emergency declared in March 2020, granting the prime minister sweeping powers to rule by decree.

In early 2022, Jordanian lawmakers amended the country’s electoral and political parties laws and enacted constitutional amendments in line with the recommendations issued by the Royal Committee to Modernize the Political System convened by Jordan’s King Abdullah II in 2021. The recommendations emphasized the need for “full respect for human rights and the creation of a safe space for fundamental freedoms that would enable political participation,” but the new legislation maintained vague provisions that can be used by authorities to constrain political parties.

Jordanian law criminalizes speech deemed critical of the king, foreign countries, government officials and institutions, Islam and Christianity, and defamatory speech. In September, Human Rights Watch issued a report documenting how Jordanian authorities are using vague and overly broad criminal laws to suppress free speech and other freedoms. In 2020, the number of cases relating to these charges almost doubled from the previous year, according to the annual reports from the National Center for Human Rights (NCHR).

On March 8, Jordanian authorities briefly detained Daoud Kuttab, a prominent Palestinian-American journalist and director general of the Amman-based Community Media Network, following a complaint about an article posted in 2019 about the detention of an investor. The day before, authorities arrested journalist Taghreed al-Rishq apparently over a tweet in which she criticized a pro-government journalist.

Jordanian authorities further curtailed press freedom in 2022 by issuing arbitrary press gag orders prohibiting reporting on important local developments, including all local reporting around the shooting to death of a woman college student in June. Jordanian press outlets did not report on revelations in February that the king opened Swiss bank accounts in 2011 into which were transferred millions of dollars.

Under the Public Gatherings Law amended in March 2011, Jordan did not require government permission to hold public meetings or demonstrations, but authorities continued to require organizations and venues to obtain permission from the Interior Ministry or General Intelligence Department to host events.

Several Jordanian laws restrict freedom of association, including the Labor Law of 1996, which limits the ability to freely form trade unions, and the Associations Law of 2008, which regulates the formation and operation of nongovernmental groups. Jordanian authorities impose onerous pre-approval restrictions on the receipt of foreign funding by nongovernmental groups (NGOs).

In late 2019, Jordanian authorities created a centralized committee under the Prime Minister’s Office to study and decide foreign funding approval requests, but representatives of donor states and local NGOs told Human Rights Watch in 2022 that the committee has done little if anything to ease the restrictions. In September 2022, the Community Media Network, a local NGO, filed a complaint with the NCHR over authorities' arbitrary rejection of a 25,000 Jordanian Dinar (US$35,200) grant from the German development agency to produce a campaign to raise awareness about recycling.

By late 2022, over 670,000 people from Syria had sought refuge in Jordan, according to the United Nations High Commissioner for Refugees (UNHCR). Over 85 percent of Syrians lived outside refugee camps in rented accommodation.

According to the UNHCR, Jordan also hosted asylum seekers and refugees from other countries in 2022, including 65,854 Iraqis, 12,934 Yemenis, 5,579 Sudanese, 651 Somalis, and 1,379 from other countries. Authorities continued to enforce a January 2019 decision banning the UNHCR from registering as asylum seekers individuals who officially entered the country for the purposes of medical treatment, study, tourism, or work, effectively barring recognition of non-Syrians as refugees and leaving many without UNHCR documentation or access to services.

Authorities continued to implement the Jordan Compact, the 2016 agreement between the Jordanian government and donor countries, which aimed to improve the livelihoods of Syrian refugees by granting new legal work opportunities and improving the education sector. By early 2022, labor authorities had issued or renewed at least 252,000 work permits for Syrians since 2016, although many of these were renewals. The UNHCR reported in January that authorities issued 62,000 work permits for Syrians in 2021 alone. Most professions remained closed to non-Jordanians, and many Syrians continued to work in the informal sector without labor protections.

The roughly 230,000 school-age Syrian refugees in Jordan face multiple obstacles to education that are most acute for children ages 12 and older, including poverty-driven child labor and child marriage, lack of affordable school transportation, government policies that limit access to education, and lack of inclusive education and accommodation for children with disabilities.

Only a quarter of secondary-school-age Syrian refugee children in Jordan were enrolled in school. Non-Syrians refugees and asylum seekers were in many cases prevented from enrolling their children in school in 2022. Children without official identification numbers were unable to access online learning platforms during Covid-19 school closures.

Jordan’s personal status code remains discriminatory, despite amendments in 2019. Women need the permission of a male guardian to marry for the first time, and marriages between Muslim women and non-Muslim men are not recognized. Women cannot travel abroad with their children, as men can, without the permission of their child’s father, other male guardian, or a judge. While women can travel outside the country without needing permission, authorities sometimes comply with requests from male guardians to bar their unmarried adult daughters, wives, and children from leaving the country. Authorities also arrest women reported as “absent” for fleeing their home by their male guardians under the Crime Prevention Law.

Article 98 of Jordan’s penal code, amended in 2017, states that the “fit of fury” defense does not allow mitigated sentences for perpetrators of crimes “against women,” but judges continued to impose mitigated sentences under article 99 if family members of victims did not support prosecutions of their male family members. Article 340 of the penal code also allows a man to receive a reduced sentence if he kills or attacks his wife or any of his female relatives in the alleged act of committing adultery or in an “unlawful bed.”

Such discriminatory laws leave women exposed to violence. Similarly, the penal code and Juveniles Act do not prohibit corporal punishment and allow parents to punish children in accordance with “general norms.”

In July, women protested outside Parliament for improved legislation to combat gender-based violence and transparent accountability measures for the perpetrators of violence against women. The protests followed a series of public killings of women including the stabbing of a woman by her husband outside a courthouse in Karak and the fatal shooting by a man of 21-year-old student at her university campus in Amman.

Article 9 of Jordan’s Nationality Law does not allow Jordanian women married to non-Jordanian spouses to pass on their nationality to their spouse and children. In 2014, authorities issued a cabinet decision purporting to ease restrictions on access to key economic and social rights for non-citizen children of Jordanian women, but the measures fell short of expectations. Non-citizen children of Jordanian women no longer require work permits for employment, but many professions in Jordan remained closed to non-Jordanians.

Jordan has no laws that explicitly criminalize same-sex relations. The penal code includes vague “immorality” provisions that are used to target sexual and gender minorities. Jordanian law does not prohibit discrimination based on sexual orientation and gender identity.

Jordan summarily deports foreign nationals found to be HIV-positive, and LGBT people living with HIV have reported facing stigma and discrimination by medical professionals and employers, without any legal recourse.

Jordan remains one of the few countries in the world that still allow imprisoning people for debt, which is prohibited under international law. In 2022, the parliament passed amendments to the main law that mandates debt imprisonment. While the amendments were an improvement, they fell short of ending the practice entirely. As of April 1, at least 148,000 people were wanted for prison terms for unpaid debts, according to the Justice Ministry. Human Rights Watch has documented how, in the absence of an adequate social security net, tens of thousands of Jordanians took out loans to cover basic necessities only to end up in prison or wanted for failure to repay.

As of November, authorities had not carried out any executions in 2022.

In September 2022, the US and Jordan signed a new memorandum of understanding under which the US committed to providing Jordan with $1.45 billion per year in US bilateral foreign assistance from 2023 through 2029.

Normalization efforts between Jordan and Syria continued in 2022, but ongoing border issues including rampant drug smuggling from Syria hampered a broader rapprochement.

Jordan is a member of the Saudi Arabia and United Arab Emirates-led coalition fighting  Houthi forces in Yemen, which has committed numerous violations of international human rights and humanitarian law in Yemen.

Update January 17, 2023: This chapter has been updated to reflect the correct year of the Labor Law.