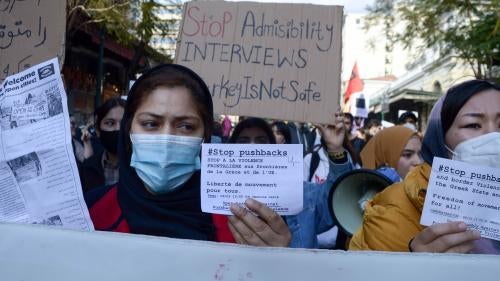 Greece welcomed tens of thousands of Ukrainian refugees but failed to protect the rights of other asylum seekers and migrants, including by pushing new arrivals back to Turkey. The crackdown on nongovernmental groups and criminalization of solidarity continued. Curbs on media freedom and a surveillance scandal raised concerns about the state of rule of law. Law enforcement abuse remains widespread. Law enforcement officials failed adequately to respond to hate crimes and in some cases were complicit in them.

Greece initiated in April temporary protection for Ukrainian refugees. According to authorities, by July 31 Greece hosted a total of 70,676 Ukrainian refugees while by September 11, 10,139 non-Ukrainians had arrived in Greece in 2022—5,742 by sea and 4,397 by land.

Greece's migration minister, Notis Mitarachi, told parliament in March that Ukrainians are “real refugees,” while those arriving from Syria or Afghanistan are “irregular migrants,” even though many Syrians and Afghans have valid refugee claims.

While the Greek government continued to deny it engages in illegal pushbacks, it reported in early September “averting” 150,000 irregular arrivals in 2022.

In its annual report published in March, the Greek ombudsman criticized Greek authorities’ investigations of pushbacks. An April investigation by Greece’s National Transparency Authority—tasked by the government as the independent body to investigate border abuses—found no basis for reports of migrant pushbacks by Greek authorities.

In February, Filippo Grandi, the UN high commissioner for refugees, singled out Greece over pushbacks and rights violations at borders. “We are alarmed by recurrent and consistent reports coming from Greece’s land and sea borders with Turkey, where UNHCR has recorded almost 540 reported incidents of informal returns by Greece since the beginning of 2020,” he said. Ylva Johansson, European commissioner for home affairs, warned in July that “violent and illegal deportations of migrants must stop, now”. The commissioner noted that the European Commission’s “funding is linked to EU fundamental rights being correctly applied”.

The European Court of Human Rights (ECtHR) issued a landmark judgment in July concerning Greek authorities’ role in the deaths of 11 women and children, including infants, off the Greek island of Farmakonisi in January 2014, in what survivors describe as a pushback operation.

Greece regularly ignores an increased number of emergency orders issued by the ECtHR to prevent the summary return of asylum seekers stranded along the borders with Turkey, and at imminent risk of pushback.

Despite lack of returns to Turkey since March 2020, Greece continued to use the inadmissibility procedures on the basis that Turkey is a “safe third country” for asylum seekers from Syria, Afghanistan, Somalia, Pakistan, and Bangladesh.

A June report by nongovernmental group (NGO) Refugee Support Aegean revealed persisting systematic detention of asylum seekers in Greece. In September, 22 NGOs denounced the “prison-like” conditions at the first EU-funded Closed Controlled Access Centre (CCAC) in Samos, established a year before. Greek courts continued to convict migrants of being “human smugglers,” sentencing some to more than 100 years in prison, on dubious evidence.

By mid-September, 1,261 unaccompanied migrant children and 3,700 others deemed vulnerable had been relocated from Greece to other EU and associated countries, including 2,812 to Germany.

Members of the European Parliament sent written questions to the European Commission in September about the EU-funded surveillance systems deployed in migrant reception areas in Greece, which the MEPs believe pose an unacceptable risk to fundamental rights.

In June, United Nations special rapporteur on human rights defenders, Mary Lawlor, while presenting her preliminary findings at the end of a 10-day mission in Greece, described an environment of fear and insecurity for human rights defenders in the country, particularly those working on migration. Judicial review applications challenging the legal framework are pending before the Council of State—Greece’s highest administrative court.

In its Rule of Law report published in July, the European Commission noted the narrowing space for groups working with migrants and asylum seekers and recommended that Greece ensure registration requirements for civil society organizations are proportionate.

Greek authorities accused NGOs of coordinating with human smugglers to circumvent border controls by making appeals to the ECtHR to prevent pushbacks in the Evros region, with authorities reportedly initiating an “investigation” into organizations active in the region.

After facing two years of “obstacles and hurdles” the NGO Mare Liberum announced in February that it is unable to continue its monitoring of the Aegean Sea, leaving the strait without civilian monitoring. Mare Liberum faced new rules for registration of NGOs that are incompatible with international law.

Nongovernmental groups criticized the conviction in February of two Greek Helsinki Monitor staff by an Athens Court to a 12-month prison sentence suspended for three years on the charge of “falsely accusing” an Orthodox bishop of racist hate speech. Their appeal trial was scheduled for March 2023.

Greece fell 38 positions within a year in Reporters Without Borders’ 2022 report on the Press Freedom Index, with the organization marking it the lowest-ranked European Union country, reflecting the gravity of concerns about media freedom in the country.

An ongoing surveillance scandal—described by some media as the Greek Watergate—continued during the year. It began with revelations in November 2021 that Greece’s intelligence service (EYP) had spied on Stavros Malichoudis, an independent reporter. It emerged in April 2022 that the mobile phone of Thanasis Koukakis, a freelance journalist investigating banking and business stories, was infected by spyware by unknown persons. Days later, it was also revealed that Koukakis was also surveilled by EYP. At the end of July and in early August, it was reported that the leader of the opposition party PASOK and Member of the European Parliament, Nikos Androulakis, was also surveilled by EYP and that there had been an attempt to hack his phone using the same spyware as Koukakis’ phone.

A parliamentary inquiry into the surveillance opened in September, but the ruling party blocked dozens of witnesses proposed by opposition parties, including journalists whose phones have been wiretapped. In addition, MPs decided that all inquiry meetings would be held behind closed doors and remain confidential, raising transparency concerns.

In September, the government threatened Der Spiegel Greece correspondent Giorgos Christides with legal action over his reporting of the prolonged failure of the authorities to rescue a child and others stuck on an islet in Evros, despite interim measures from the European Court of Human Rights (ECtHR) ordering it to do so.

In its Rule of Law Report published in July, the commission warned that attacks and threats against journalists persist, and journalists’ professional environment has deteriorated further. These include physical attacks, threats, arbitrary detention, criminal lawsuits, and surveillance. It recommended Greece to establish legislative and other safeguards to improve the physical safety and working environment of journalists.

United Nations special rapporteur on human rights defenders, Mary Lawlor, said in June that “Journalists who counter the government’s narrative on the management of migration flows are often under pressure and lack access to mainstream media outlets. … Journalists reporting on corruption are sometimes facing threats and even charges.”

The Judicial Council of the Supreme Court ruled out allegations made by authorities against four Greek journalists and publishers that led to criminal charges linked to their investigative reporting into the bribery of state officials and doctors allegedly to grant preferential market access to a pharmaceutical company. The Judicial Council said allegations against the journalists were baseless and declined to send them to trial.

Ingeborg Beugel, a Dutch correspondent in Greece, faced trial on June 1 in the Piraeus Court charged with “facilitating the illegal stay of a third-country national” for hosting in her home in Hydra an Afghan national who had been a rejected asylum seeker. The trial was postponed and is pending at this writing. Beugel experienced online and physical harassment in November 2021 following a heated dialogue with Greek Prime Minister Kyriakos Mitsotakis during a press conference where she questioned him about pushbacks.

There has been no significant progress in the investigation into the April 2021 murder of journalist Giorgos Karaivaz in Athens.

Statistics on hate crimes for 2021, released in May by the nongovernmental Racist Violence Recording Network (RVRN), showed a decrease in incidents of organized violence. However, in most of the incidents recorded by RVRN and involving refugees and migrants, the victims identify law enforcement officials among the perpetrators. The report identifies racially motivated police violence as a growing trend since 2018, especially during the pandemic.

RVRN also found that lesbian, gay, bisexual, and transgender (LGBT) individuals were targeted by a wide range of perpetrators, including ordinary citizens, public officials, law enforcement officials, and even family members. Reports of incidents of violence against LGBT people intensified amidst the pandemic, including domestic violence and harassing behaviors during periods of restricted movement to control the spread of Covid-19.

In a September report, the European Commission against Racism and Intolerance welcomed Greece’s anti-racism action plan and national lesbian, gay, bisexual, transgender, and intersex equality strategy, but warned of continued discrimination against LGBTI pupils in schools, racist and anti-LGBTI police abuse, and forced evictions of Roma.

A Greek court acquitted four police officers over the 2018 killing of 33-year-old queer activist and human rights defender Zak Kostopoulos. Two other men were found guilty of assault and sentenced to 10 years, in one case to be served at home.

The results of an investigation by the Hellenic Data Protection Authority initiated in August 2020 into the lawfulness of a “smart policing” program to scan people’s faces and fingerprints were still pending. The program is inconsistent with international human rights standards on privacy and likely to amplify ongoing discrimination, including ethnic profiling resulting from the government’s targeted sweep operations against migrants.

The government came under increasing pressure to combat domestic violence, including by making femicide a standalone crime, as the murders of two women in one day in August sparked public outrage and protests. The killing of a woman set on fire by her husband in September and of another woman and her 10-month-old baby brought the total to at least 17 women murdered so far this year.

The reporting was withdrawn by Der Speigel in late November 2022 because of concerns about the accuracy of some of the claims, including whether the group was on Greek territory for the entire period.