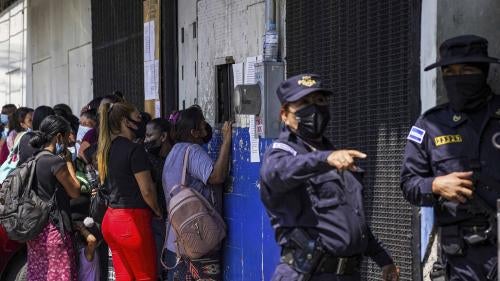 President Nayib Bukele and his majority in the Legislative Assembly have systematically dismantled democratic checks and balances. In September, he announced he would seek re-election in 2024, despite a constitutional prohibition on immediate re-election.

Gangs continue to exercise control over some neighborhoods and extort residents. They forcibly recruit children and sexually abuse women, girls, and lesbian, gay, bisexual, and transgender (LGBT) people. They kill, disappear, rape, or displace those who resist.

Since taking office in 2019, President Bukele and his allies have taken steps to effectively co-opt democratic institutions.

In May 2021, Bukele’s two-thirds majority in the Assembly summarily removed and replaced all five judges on the Supreme Court’s Constitutional Chamber and the attorney general.

Also in September, the Supreme Court’s Constitutional Chamber ruled that the constitution allowed for immediate presidential re-election, although it had been consistently interpreted to forbid immediate re-election.

A Bukele administration-sponsored overhaul to the constitution, which would reform the courts and other bodies, remained pending at time of writing.

Gangs continued to forcibly recruit children and sexually assault, kill, abduct, rape, and displace people. For decades, the response by authorities has oscillated between obscure negotiations with gangs and iron fist security policies that have led to rights violations.

Violence in areas controlled by gangs drives internal displacement. The Office of the United Nations High Commissioner for Refugees in 2021 reported 71,500 internally displaced people. More than 153,000 Salvadorans sought asylum in other countries, mostly the US, in 2021.

El Faro, a prestigious digital news outlet, reported that, before being fired in 2021, former Attorney General Raúl Melara had been investigating negotiations between the Bukele administration and the country’s three largest gangs. According El Faro , the government offered members prison privileges and employment opportunities in exchange for lowering the homicide rate.

Between March 24 and 27, in El Salvador, seemingly by gangs; the highest homicide number in years, which led to authorities’ state of emergency declaration. According to El Faro, the wave of violence in March was triggered by the collapse of government negotiations with the MS-13 gang . Nobody had been convicted of the killings as of September.

The government reported that there were no homicides during many days of 2022, but authorities have told journalists that the aggregated data on homicides is “classified.” The official homicide rate declined from about 36 per 100,000 in 2019 to 17 per 100,000 in 2021. In July 2019, the government changed the way killings are counted , excluding cases in which police officers were reported to have killed alleged gang members in confrontations.

Abuses During the State of Emergency

In March 2022, the Legislative Assembly adopted for 30 days a state of emergency that suspends some basic rights. Legislators had extended the measure nine times and it remained in place at time of writing.

Also in March, legislators approved gang-related legislation that allows authorities to imprison children as young as 12 and expands the use of pretrial detention.

Over 60,000 people were detained under the state of emergency between late March and mid-December, authorities report. Many arrests appear to have been based on the appearance or social background of the detainees, and local human rights groups have documented that hundreds of people with no connection to gangs have been detained.

Human rights organizations, including Cristosal and Human Rights Watch, have documented serious abuses by security forces during the state of emergency, including arbitrary arrests, enforced disappearances, torture and other forms of ill-treatment, and due process violations.

Cristosal reported over 2,900 cases of human rights violations during the state of emergency.

Over 54,000 people arrested during the state of emergency went into pre-trial detention, contributing to prison populations increasing to an estimated 97,000 detainees, over three times official capacity . Historically poor conditions in detention—overcrowding, violence, and poor access to such services as food and drinking water—worsened.

Over 90 detainees died in prison, according to Salvadoran authorities. In some cases, authorities have failed to conduct autopsies or else follow internationally accepted medical and legal standards.

The Attorney General’s Office registered more than 28,000 complaints of missing people between January 2005 and August 2021. This is more than the estimated 8,000 to 10,000 disappeared during the 12-year civil war that ended in 1992. Between January and May 2022, Foundation Studies for the Application of Law (FESPAD), a local nongovernmental organization, counted 500 disappearances registered by the National Civil Police. Perpetrators include gangs and security forces. Accountability in these cases is rare.

At the time of his removal, in May 2021 , Attorney General Melara was investigating six government officials for alleged corruption regarding funds allocated for Covid-19.

In June 2021, the new Attorney General, Rodolfo Delgado, ended a cooperation agreement with the International Commission Against Impunity in El Salvador (CICIES), a body backed by the Organization of American States (OAS) to fight corruption.

In January 2022, the Attorney General’s Office raided the offices of prosecutors who had, under Melara, been investigating allegations of corruption and officials’ negotiations with gangs. Four prosecutors fled the country, fearing persecution.

The Bukele administration has weakened the role of the Access to Public Information Agency including by changing the agency’s regulations in ways that undermine its autonomy and by dismissing one of its members.

The government has created a hostile environment for the media.

The Association of Journalists of El Salvador (APES) reported 421 “press freedom violations” between 2019 and 2021, including physical attacks, digital harassment, and restrictions on journalists’ work and access to public information. APES also reported that nine journalists fled the country fearing harassment and arbitrary arrests.

In January 2022, Citizen Lab and Access Now reported that Pegasus spyware had been used to hack the mobile phones of at least 35 Salvadoran journalists and civil society members, including 22 reporters from El Faro.

In April, the Legislative Assembly passed an overly broad law establishing new criminal offenses carrying prison sentences of up to 15 years for journalists who reproduce messages by gangs.

The Bukele administration proposed a “foreign agents” law, in November 2021, requiring individuals and organizations that “directly or indirectly” receive funding from abroad to register as “foreign agents.” In August 2022, the speaker of the government’s party, Christian Guevara, said authorities would use it, once passed, to punish El Faro.

Impunity for abuses committed during the country’s civil war (1980-1992) remains the norm.

Nobody has been sentenced for the 1981 massacre in El Mozote village , in which a US-trained battalion killed 978 civilians, including 553 children, and raped and tortured many victims. A trial of former military commanders accused in the massacre started in 2016. In 2021, Jorge Guzmán, the judge in the criminal case against the alleged perpetrators of the massacre, was ousted and the trial stalled.

Abortion is illegal under all circumstances.

Many women have been convicted , and in some cases sentenced to decades, in prison, on related charges, including after miscarriages or obstetric emergencies. In June 2022, a court sentenced a woman who suffered an obstetric emergency to 50 years in prison for “aggravated homicide.”

Between September 2021 and September 2022, courts released six women who had served 6 to 13 years in prison on charges of abortion, homicide , or aggravated homicide .

El Salvador officially ratified the International Labour Organization Convention on Violence and Harassment (C190), after the Legislative Assembly ratified it in May 2022. The treaty obligates El Salvador to provide comprehensive protections to ensure a world of work free from violence and harassment, including gender-based violence and sexual harassment."

Lesbian, gay, bisexual, and transgender (LGBT) people remain targets of homophobic and transphobic violence by police, gangs, and the general public. In many cases, LGBT people are forced to flee the country, and often seek safety in the United States.

In February 2022, the Supreme Court ordered the Legislative Assembly to create, within one year, a procedure for transgender people to change their names on identity documents . Legislators had not begun discussions as of September 2022. Meanwhile, transgender people continue to experience discrimination due to a mismatch between their gender and their identity documents, including in the ambits of health, employment, voting, and banking.

For fiscal year 2022, the US appropriated over US$66 million in bilateral aid to El Salvador, particularly to reduce extreme violence and strengthen state institutions. The US Congress prohibited Foreign Military Financing to El Salvador and, in 2021, the United States Agency for International Development redirected assistance away from the National Police and the Institute for Access to Public Information and towards civil society groups.

In July 2022, the administration of US President Joe Biden added six Salvadorans to the 19 already on the “Engel List” of individuals engaged in “significant corruption” or acts that “undermine democratic processes.” They included President Bukele’s legal advisor and press secretary, and the speaker of his party.

In March 2022, UN Secretary-General Antonio Guterres expressed concern about soaring violence in El Salvador and asked authorities to address it with measures “in line with international human rights law and standards.”

In April 2022, the Office of the UN High Commissioner for Human Rights expressed concern over the Salvadoran government’s response to gang violence, including arrests without warrants, reports of ill-treatment, and amendments to the criminal code.

In June, six United Nations experts expressed “serious concerns” over allegations of abuses committed during the state of emergency, including enforced disappearances and a “pattern” of arbitrary arrests.

In March 2021, El Salvador announced it was re-negotiating a US$1.3 billion loan with the International Monetary Fund (IMF) . Negotiations have been stalled , apparently due to El Salvador’s adoption in September 2021 of bitcoin as legal tender and concerns over the weakening of judicial independence and the reduction of transparency and accountability. The Inter-American Development Bank approved $1.3 billion in funds for El Salvador for 2021-2024 and, in 2021, the Central American Bank of Economic Integration approved an $8,884.7 million loan—its largest to any country in the region.