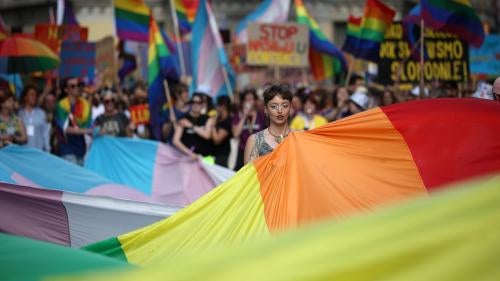 In October, the European Commission published its annual progress report on BiH, granting European Union candidate status to the country, even though “significant reforms are still needed to ensure that all citizens are able to exercise their political rights” and a lack of progress on rule of law and election reform.

The Organization for Security and Co-operation in Europe (OSCE) recorded 91 hate crimes based on ethnicity or religion between January and June, four involving physical violence. At time of writing, 13 hate crime trials were ongoing and 1 person was convicted in 2022.

After her visit to BiH in June, United Nations High Commissioner for Human Rights Michelle Bachelet highlighted discrimination based on ethnicity, gender, and sexual orientation and expressed concerns about access to education, social protection, and the rights of Roma and people with disabilities.

The Office of the High Representative (OHR) in July proposed controversial changes to the election law, including reducing representation from the country’s three main groups in the upper house of Federation BiH Parliament if a group makes up less than 3 percent of the population in a particular area. The measure was withdrawn following protests while others were maintained.

After polls closed on election day, October 2, the OHR imposed further election changes, provoking widespread criticism, including of the timing. The measures fail to address long-standing political discrimination against Jews, Roma, and other minorities who are barred from standing for the Presidency, notwithstanding the modest increase in the number of seats for such minorities in the upper house of the Federation Parliament.

A report on the impact of Covid-19 in BiH published by UNICEF and UNDP in June found that the pandemic increased poverty and food deprivation and worsened social and economic inequalities, especially among already disadvantaged groups and those at risk of deprivation or deemed “vulnerable.”

Roma people face obstacles to the enjoyment of their rights. According to a 2022 study by the Romani Early Years Network (REYN), many Roma children face discrimination when accessing public services, including education and health care.

The pace of war crimes prosecutions remains slow. The OSCE concluded in June that authorities were unlikely to meet a deadline to process all remaining war crime cases by the end of 2023.

At the end of July, 237 war crime cases against 502 defendants were pending before courts in BiH, according to the OSCE. Almost 500 war crimes cases involving 4,000 suspects have yet to reach the courts. In the first six months of 2022, courts in BiH rendered first instance judgments in 20 cases and final judgements in 14 cases.

As of August 2022, there were 51 pending cases involving allegations of conflict-related sexual violence. In the first six months of 2022, courts reached 4 first instance judgments and 5 final judgements.

A March report published by TRIAL International, Vive žene, and the Global Survivors Fund found that BiH has not yet provided adequate and effective reparations to survivors of conflict-related sexual violence due to an inadequate legal framework. Only about 1,000 of an estimated 20,000 survivors have received some form of reparations.

In July, the Constitutional Court of BiH found unconstitutional an attempt by Republika Sprska to limit a 2021 genocide denial law on its territory. The issue continues to be politicized 27 years after the genocide in Srebrenica.

In July, authorities in the district of Brcko approved a draft law to provide civilian victims of the 1992-95 war with reparations and recognize the rights of children born as a result of conflict-rated sexual violence. The UN called on other authorities in BiH to follow suit. Later the same month, the parliament of the Federation of BiH approved a draft law aiming to provide similar reparations.

Although the Service for Foreigners’ Affairs registered 11,881 persons between January and August expressing an intention to seek asylum, the UN Refugee Agency (UNHCR) reported that only 90 people submitted asylum applications in the first six months of 2022. Bosnian authorities issued 35 decisions. Of these, none were granted refugee status and 12 were granted subsidiary protection.

By June, the Service for Foreigner’s Affairs recorded 363 Ukrainians in BiH, 102 of whom expressed intention to apply for asylum. Ukrainians are granted temporary residence on humanitarian grounds.

A survey of child migrants, predominantly unaccompanied children, found widespread abuse by police, smugglers, and others, including sexual violence and pushbacks. Reports of pushbacks and abuses at the Croatian border continued.

A January submission by the Institution of Human Rights Ombudsman of Bosnia and Herzegovina to the UN Special Rapporteur on the right to health concluded that domestic violence in BiH, especially violence against women, is among the country’s most serious human rights violations.

According to the women’s rights organization Kvinna till Kvinna, progress in addressing gender-based violence is hindered by many issues, including ineffective coordination among judiciary, law enforcement, and centers for social work.

Between January and August 2022, the Sarajevo Open Center recorded eight hate incidents against LGBTQ+ people, all of which were physical attacks.

Sarajevo Pride took place in June 2022. Ahead of the parade, monitoring showed an increase in anti-LGBT speech on social media including by politicians.

In April, a municipal court in Sarajevo ruled in favor of Sarajevo Open Center who sued a former assembly woman for inciting state institutions to discrimination against LBGT people. It was the first ever verdict in a BiH court against discrimination based on sexual orientation or gender identity.

In April, the national public radio and TV broadcaster BHRT faced risk of closure, after RTRS, the public broadcaster in Republika Srpska, refused to pass on millions of Euros of shared revenue from the national license fee despite its obligation to do so, a move described by Reporters Without Borders as an attack on media pluralism. BHRT’s accounts were unfrozen following the intervention of the BiH Federation Parliament.

Authorities failed to tackle the country’s horrific air pollution, which kills thousands of people prematurely each year and is detrimental to the health of thousands more. The country’s reliance on coal and wood for heat and coal for electricity generation makes cities in BiH some of the world’s most polluted during winter months. Despite health and climate impacts, authorities remain committed to coal, particularly for electricity.

The chapter has been corrected to clarify that the case decided by the Sarajevo municipal court in April 2022 was brought by the Sarajevo Open Centre and found incitement to discrimination.