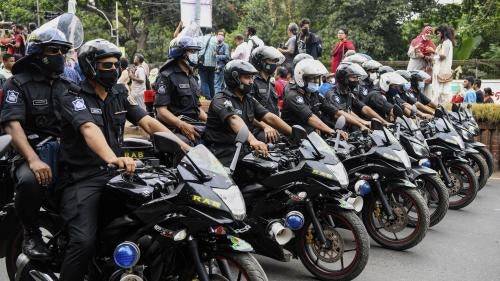 Following the US Global Magnitsky human rights sanctions against Bangladesh’s Rapid Action Battalion (RAB) and some of its top commanders in December 2021, extrajudicial killings and enforced disappearances dropped dramatically, indicating that authorities have the ability to bring security force abuses under control. However, instead of taking steps toward reform, authorities launched a campaign of threats and intimidation against human rights defenders and families of victims of enforced disappearances.

Bangladesh continues to host about 1 million Rohingya refugees, but authorities have intensified restrictions on their livelihoods, movement, and education. International attention has waned and the 2022 Joint Response Plan for the Rohingya humanitarian crisis remained severely underfunded at time of writing.

Starting in August, there were increasing attacks against political opposition members, raising concerns about violence and repression ahead of upcoming parliamentary elections.

Following the US sanctions, victims’ families reported that officers came to their homes, threatened them, and forced them to sign false statements that their relative was not forcibly disappeared and that they had intentionally misled the police. Security forces also ramped up surveillance of human rights activists and harassment of human rights organizations. United Nations rights experts urged the government to end reprisals.

The Foreign Ministry reportedly prepared a list of dissidents abroad who are committing “anti-state” activities, and authorities increasingly targeted relatives of expat dissidents. In September, officers from the Detective Branch arrested the brother of London-based news editor Shamsul Alam Liton after he published an editorial critical of the ruling party and organized protests in Britain against disappearances. The same month, police arrested Abdul Muktadir Manu, the brother of another London-based correspondent for the same newspaper. Nusrat Shahrin Raka, sister of US-based journalist Kanak Sarwar, received bail after nearly six months in detention.

On June 5, the Non-Governmental Organization Affairs Bureau sent a letter to Odhikar, one of the country’s most prominent human rights organizations, denying the group’s renewal of registration. The decision was upheld by the Prime Minister’s Office on September 1. Odhikar’s secretary, Adilur Rahman Khan, and director, ASM Nasruddin Elan, were additionally facing ongoing trials as part of longstanding harassment to punish the organization for reporting extrajudicial killings by Bangladesh security forces in 2013.

Despite a temporary drop in abuses following the announcement of US sanctions, security forces showed signs of returning to old practices, targeting the ruling Awami League’s political opponents and critics. The government dismissed the allegations that led to sanctions, saying they were “false and fabricated.” In January, Prime Minister Sheikh Hasina awarded two sanctioned RAB officials prestigious police medals for their “bravery and service to the country.”

On August 14, Netra news—which is blocked in Bangladesh—published a whistleblower report revealing that Bangladesh officials were allegedly holding and torturing victims of enforced disappearance at a secret detention site.

Authorities continued to arrest critics under the draconian Digital Security Act. The government ignored pleas from the UN and international partners to suspend and reform the abusive law. In July, the government released the draft Data Protection Act, which experts say could increase surveillance and violate the rights to privacy.

At time of writing, Bangladesh reported over 440,000 new confirmed cases of Covid-19 and 1,300 deaths in 2022. However, at time of writing, the positive test rate was above 27 percent, indicating that transmission rates are likely higher than is reported. Schools fully reopened in July after almost 18 months of Covid-19-related school closure, one of the longest in the world. Children’s rights advocates raised concerns that tens of thousands of students were not returning to school and instead that many of these children were pushed into child labor amid the economic fallout during the pandemic.

According to Bangladeshi human rights organization Ain o Salish Kendra, as of October 1, 193 women and girls were reportedly murdered by their husband or husband’s family in 2022. Women in Bangladesh continue to have little recourse to seek protection, services, or access justice in case of domestic violence. Bangladesh continues to have one of the highest rates of child marriage in the world.

Following widespread protests and advocacy by women’s rights activists, the cabinet approved a draft amendment to section 155(4) of the Evidence Act, removing aspects that allowed the defense to denigrate the character of women if they pursue criminal charges for sexual violence.

Same-sex conduct is criminalized in Bangladesh with penalties from 10 years to life in prison. Lesbian, gay, bisexual, and transgender people and advocates faced violence and threats without adequate protection from the police.

In September, the Committee on the Rights of Persons with Disabilities published concluding observations in its review of Bangladesh, expressing concern over discrimination that creates barriers to education, health care, and justice, especially for women and girls with disabilities.

In September, Human Rights Watch interviewed people with disabilities and their families following the flash floods in Sylhet in May that displaced almost 9 million people and killed hundreds. Interviewees described a lack of warning systems that would have enabled them to prepare and seek shelter. After the floods, people with disabilities faced additional hurdles accessing toilets, food, water, and medicines, putting their lives and health at increased risk.

In the Rohingya refugee camps, Bangladesh officials closed community-led schools, arbitrarily destroyed shops, and imposed new obstacles on movement, including threats, frequent curfews, and harassment at checkpoints. The government allowed humanitarian actors in the camps to begin teaching the Myanmar curriculum but continues to deny refugee children any accredited education.

Authorities moved about 8,000 Rohingya refugees to Bhasan Char, bringing the total to around 28,000 refugees living on the remote silt island where they face severe movement restrictions, food, and medicine shortages, and abuses by security forces. Despite the involvement of the United Nations High Commissioner for Refugees (UNHCR), many continue to be transferred without full, informed consent, and have been prevented from returning to the mainland.

In January, the Bangladesh government and Myanmar junta announced joint plans to “expeditiously complete the verification process” for repatriation, even though conditions do not exist for voluntary, safe, and dignified returns.

Increased fighting between the Myanmar military and Arakan Army ethnic armed group in Rakhine State has spilled across the border, endangering Rohingya refugees and Bangladesh civilians.

Bangladesh is among the countries most vulnerable to the impacts of climate change, despite having contributed little to the greenhouse gas emissions causing rising temperatures. Due to climate change, cyclones will become more intense and frequent, posing a growing threat to tens of millions of people living along the country's low-lying coastline. In June, an estimated 7.2 million people in Bangladesh were affected by record level flooding in the northeast.

An ongoing buildout of coal and gas projects in Chattogram, if constructed, will emit greenhouse gases equivalent to five years of Bangladesh’s annual greenhouse gas emissions, as well as air pollution that threatens the health of local populations and biodiversity. In June, the government announced that it cancelled plans to build the controversial Matarbari 2 coal plant, following the loss of Japanese investment. But the government now plans build a liquified natural gas (LNG) power plant instead, continuing to lock Bangladesh into decades of greenhouse gas emissions.

United Nations High Commissioner for Human Rights Michelle Bachelet, during her three-day visit to Bangladesh in August, called on the government to protect rights and establish an independent mechanism to “investigate allegations of enforced disappearances and extrajudicial killings”. She offered her office’s support to create a special mechanism in line with international standards. She also warned that as “the biggest contributor of uniformed personnel to UN peacekeeping missions, Bangladesh should ensure it has a robust system in place for the careful human rights screening of security personnel.”

On March 3, the UN urged the Bangladesh government to provide information on the implementation of the recommendations regarding allegations of torture reported during a 2019 review of its obligations under the Convention against Torture, which it has ignored for over two years.

In March, a European Union monitoring mission travelled to Bangladesh to assess the human rights situation, and urged progress in the context of the enhanced engagement process under the Everything But Arms (EBA) scheme. Further talks were held in May. Also in March, undersecretary for political affairs at the US Department of State, Victoria Nuland, met with Bangladesh officials during the US-Bangladesh Partnership Dialogue, during which she called for accountability for security force abuses.

Bangladesh attempted to balance a strategic relationship between China and India, and both failed to publicly back calls from the US, UK, and Japan to ensure free and fair elections.