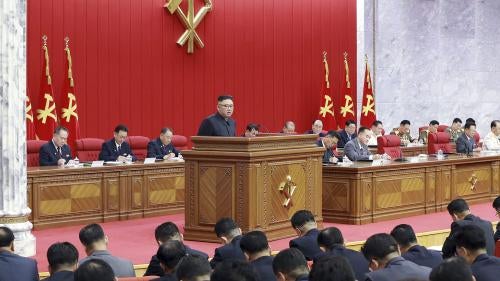 The Democratic People’s Republic of Korea (DPRK) remains one of the most repressive countries in the world. Ruled by the authoritarian leader Kim Jong Un, the government responded to international challenges and the Covid-19 pandemic in 2021 with deepened isolation and repression, and maintained fearful obedience in the population through threats of execution, imprisonment, enforced disappearances, and forced hard labor in detention and prison camps.

In 2021, the North Korea government extended extreme and unnecessary measures under the pretext of protecting against the spread of Covid-19 by closing its borders, and tightly restricting domestic travel as well as distribution of food and other products within the country.

The government does not tolerate pluralism, bans independent media, civil society organizations, and trade unions, and systematically denies all basic liberties, including freedom of expression, public assembly, association, and religion. Fear of collective punishment is used to silence dissent. Authorities in North Korea routinely send perceived opponents of the government to secretive political prison camps (kwanliso) in remote regions where they face torture by guards, starvation rations, and forced labor.

The government systematically extracts forced, unpaid labor from its citizens to build infrastructure and conduct other government-ordered campaigns and public work projects. The government fails to protect the rights of numerous at-risk groups, including women, children, and people with disabilities.

North Korea has taken no meaningful steps to advance economic, social and cultural rights. When the impact of the almost two-year-long Covid-19 lockdown intensified as the country was hit by major droughts in July, followed by flooding in August, Kim Jong Un in September acknowledged North Korea’s dire economic and food situation and called for self-reliance and “unspecified” tightened measures against Covid-19, even though the country was reporting zero positive cases of Covid-19. Meanwhile, the government continued to prioritize weapons development, conducting missile tests in March, September, and October.

Moving from one province to another, or traveling abroad, without prior approval remains illegal in North Korea. The government continues to strictly enforce a ban on “illegal” travel to China. Border buffer zones set up in August 2020, which extend one to two kilometers from the northern border, operated continuously in 2021 with guards ordered to “unconditionally shoot” on sight anyone entering without permission. There were reports of border guards shooting dead North Koreans trying to cross the border.

During the year, the government banned nearly all international travel, suspended all international flights, and closed down its official land border crossings with China. The government also imposed extreme measures on resident diplomats and international organization workers. It prohibited travel outside of Pyongyang and stopped the receipt of diplomatic pouches. Diplomatic missions, United Nations agencies, and international nongovernmental organizations were permitted to repatriate staff but were unable to bring staff back into the country. The DPRK also implemented quarantines of over a month for all reentry into the country. These measures led almost all diplomats to leave  the country, along with all UN and nongovernmental organization (NGO) aid workers.

The government also enhanced restrictions on domestic travel because of Covid-19, granting permits to travel only for movement of essential personnel and goods. Authorities increased road checkpoints, blocked inter-district movements, and enhanced enforcement to prevent “illegal” travel. These measures severely hurt people’s livelihoods and their ability to access food, medicines, and other essential goods.

Activist networks in China and South Korea that help North Koreans flee to a safe third country said they faced major obstacles because increased numbers of random checks on roads, and surveillance. Many North Koreans in China remained hidden in safe houses for months as the Chinese government sought to detain North Korean refugees and return them to the DPRK, violating China’s obligations as a state that has ratified the UN Refugee Convention. North Koreans fleeing into China should be recognized and protected as refugees sur place because of the certainty of persecution on return. China forcibly returned a group of nearly 50 North Koreans to the DPRK in July.

North Korean law states that leaving the country without permission is a crime of “treachery against the nation,” punishable by death. The 2014 UN Commission of Inquiry (COI) on human rights in the DPRK found Pyongyang committed crimes against humanity against those forcibly returned by China to North Korea.

Very few North Koreans are escaping the country. Just over 1,000 North Koreans fled to the south in 2019, but only 229 escaped in 2020. Between January and September 2021, only 48 North Koreans successfully reached South Korea where their rights are protected.

The North Korean government does not respect the rights to freedom of thought, opinion, expression or information. All media is strictly controlled. Accessing phones, computers, televisions, radios or media content that are not sanctioned by the government is illegal, and considered “anti-socialist behavior” to be severely punished. The government regularly cracks down on unsanctioned media consumption. It also jams Chinese mobile phone services at the northern border, and arrests those communicating with people outside of the country, or connecting outsiders to people inside the country.

The North Korean government adopted the “DPRK Law on rejecting reactionary ideology and culture” in December 2020. The law bans people from distributing media originating from South Korea, the US, or Japan, and sets out punishments up to the death penalty. Simply watching such media content can result in a sentence of 15 years in an ordinary crimes prison camp (kyohwaso). Under the law, speaking, writing, or singing in South Korean style can be punished with two years of hard labor. In April 2021, Kim Jong Un published a letter about “dangerous poisons,” setting out his policy to stop young North Koreans from adopting foreign speech, hairstyles, and clothes.

The law also criminalizes possession of unsanctioned foreign mobile phones, setting out penalties of three months or more of forced labor. Media with contacts inside North Korea reported increased inspections and crackdowns on student text messages that contain South Korean slang, mass arrests of users of foreign cell phones, and a propaganda campaign depicting foreign phone users as “evil” enemies of the state who must be reported to the authorities.

The North Korean government routinely and systematically requires forced labor from much of its population to sustain its economy. The government’s forced labor demands target women and children through the Women’s Union or schools; workers at state-owned enterprises or deployed abroad; detainees in short-term hard labor detention centers (rodong dallyeondae); and prisoners at long-term ordinary prison camps (kyohwaso) and political prison camps (kwanliso).

At some point in their lives, a significant majority of North Koreans must perform unpaid hard labor, often justified by the state as “portrayals of loyalty” to the government. Since punishment for crimes in North Korea is arbitrary, and depends on a person’s record of loyalty, personal connections, and capacity to pay bribes, any refusal of a government order to work as a “volunteer” can result in severe punishment, including torture and imprisonment.

The government routinely compels North Koreans to join paramilitary labor brigades (dolgyeokdae) that the ruling party controls and operates, working primarily on buildings and infrastructure projects. In theory, these workers are entitled to a salary worth around three to five kilograms of rice a month, but in almost all cases, the dolyeokdae, like most state-owned enterprises, do not financially compensate their workers. This forces workers to find other jobs to survive while paying bribes not to go to their officially assigned workplace. Failing to show up for work without permission is a crime punishable by three to six months of unpaid hard labor in detention centers (rodong dallyeondae).

North Korea remains one of only seven United Nations member states that has not joined the International Labour Organization.

Marginalized Groups and Women and Girls

In addition to the violations suffered by the general population, women and girls in North Korea are the target of a range of sexual and gender-based abuses. Government officials both perpetrate and fail to effectively respond to rights violations including widespread gender discrimination, sexual and gender-based violence, and constant exposure to stereotyped gender roles.

North Korea has ratified five core human rights treaties, but the government has made no apparent effort to implement these treaties or otherwise demonstrate respect for human right. A 2014 COI report found the government committed crimes against humanity, including extermination, murder, enslavement, torture, imprisonment, and rape, forced abortion, and other forms of sexual violence. It recommended the UN Security Council refer the situation to the International Criminal Court. The North Korean government has repeatedly denied the COI’s findings and refuses to cooperate with the Seoul-based Office of the UN High Commissioner for Human Rights or the UN special rapporteur on the situation of human rights in North Korea.

Every year from 2014 to 2017, the UN Security Council placed North Korea’s human rights violations on its formal agenda and held open meetings on how the violations threaten international peace and security. However, this effort faltered for three years in a row during the US Trump administration. The US government currently imposes human rights-related sanctions on North Korean government entities, as well as on Kim Jong Un and on several other top officials.