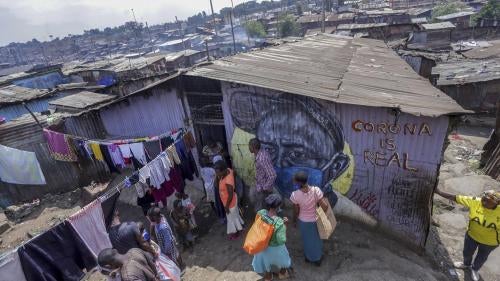 Kenya’s human rights trajectory has remained a concern, with authorities failing to ensure accountability for serious abuses throughout 2021.

Kenya, with a long history of violent elections, is set to hold general elections in August 2022. In the aftermath of the 2017 elections, police responded violently to opposition supporters’ protesting alleged vote rigging, resulting in the death of over 100 people. Kenyan authorities have done little to ensure accountability for election-related abuses in the past.

In mid-2021, the authorities ordered the closure of both Daadab and Kakuma refugee camps by June 2022, although conditions in countries of origin, notably Somalia and South Sudan, were not yet conducive for safe returns.

The ongoing Covid-19 crisis has devastated many livelihoods across Kenya. A large number of individuals and families lost some or all of their sources of income, with business closures and job losses.

Extrajudicial killings by police, including during the enforcement of Covid-19 containment measures, have remained largely unaddressed. The two main police accountability institutions, the Independent Policing Oversight Authority (IPOA) and Police Internal Affairs Unit, have been unable, for various reasons, including lack of political will, to promptly investigate and prosecute incidents of police killings. IPOA started work in 2012 and, eight years later, has managed just nine successful prosecutions for various offences, mostly for murder, despite commencing investigations into more than 500 new incidents each year.

In a July 2021 report, which focused on the socio-economic impact of the Covid-19 pandemic on informal settlements in the capital, Nairobi, Human Rights Watch found that the pandemic devastated many livelihoods, as thousands of individuals and families, who lost some or all of their sources of income, with business closures and job losses, faced the threat of hunger and eviction. Children went hungry and did not get needed urgent medical treatment.

The authorities were slow to respond to the needs of the vulnerable groups, including households in informal settlements. When the authorities finally created the eight-month cash transfer program, it was inadequate and short-lived. It provided no clear information about eligibility, how beneficiaries were identified, or why thousands of households that met the approved criteria were excluded.

The Kenyan government, which has a responsibility to ensure no one goes hungry, failed to design a social security program that would guarantee everyone, not just a few, an adequate standard of living during the pandemic. Only a small fraction of vulnerable families in Nairobi benefited from the program, which was characterized by lack of transparency, cronyism, nepotism, and outright favoritism. The authorities confirmed that the program reached just 29,000 out of over 600, 000 households in Nairobi’s eight informal settlements. This amounts to approximately 4.8 percent of all the households in dire need of support.

Despite public criticism, the police continued to use excessive force while enforcing coronavirus control measures in 2021. While the government had since eased most of the measures, save for the curfew that was lifted in October, police brutality has persisted.

On August 1, police in Kianjokoma town, Embu County, eastern Kenya, detained two brothers Emmanuel Marura Ndwiga, 19, and Benson Njiru Ndwiga, 22, for violating the 10 p.m. to 4 a.m. curfew. Relatives found their bodies at a local morgue three days later. The officers who arrested the duo claimed they fell from the moving police vehicle, but an autopsy found that the head and rib injuries found on the bodies were inconsistent with the alleged fall. These findings triggered public protests which the police violently suppressed, killing one person. On August 15, the Director of Public Prosecutions Noordin Haji charged six police officers with the killing of the two brothers.

In other instances, as in the case of Robert Mutahi, police extorted money from people arrested for violating the curfew. Mutahi told media that three police officers detained him on August 12 and forced him to transfer money from his phone to them. The three officers have since been charged with robbery with violence.

In March 2021, authorities issued a two-week ultimatum to the United Nations refugee agency, UNHCR, to draft a plan for closing both Daadab and Kakuma refugee camps, citing alleged security risks. The camps hosted over 433,000 refugees as of mid-2021, the majority Somali and South Sudanese.

In April, the government announced its intention to close both camps by June 2022, and UNHCR proposed a roadmap encompassing voluntary repatriation, some “departures to third countries,” and “alternative stay options in Kenya for certain refugees from East African Community (EAC) countries.” However, the latter does not include Somalia, previous “voluntary” repatriation efforts had proved involuntary and coercive, and the security situations in Somalia and South Sudan remained far from safe for return, as they risked being tortured or killed.

Kenya previously threatened in 2016 and 2019 to close the Dadaab camp on grounds that it allegedly harbored members of the Somalia-based Islamist armed group Al-Shabab. The authorities have never provided any evidence to support the allegation, and no one from the camp has ever been prosecuted for links with terrorism.

In May 2021, Selahaddin Gülen, a Turkish man who had requested asylum in Kenya, was forcibly returned to Turkey under suspicious circumstances. After entering Kenya in October 2020, Gülen was detained by Kenyan immigration authorities due to an Interpol Red Notice from Turkey. Kenyan authorities commenced extradition proceedings but later substituted this with a deportation order.

On May 3, 2021, during one of his court-mandated visits to the Directorate of Criminal Investigations in Nairobi, Gülen was reported missing. Another Turkish national who had accompanied Gulen to the agency headquarters and disappeared along with him was released by Kenyan authorities on May 5. On May 31, the Turkish authorities released a photo of Gülen in handcuffs in Ankara, Turkey, stating that he had been captured by agents of Turkey’s National Intelligence Organization from a foreign country and was in the custody of their counterterrorism police. The deportation of Gulen, a registered asylum seeker in Kenya, violated Kenya’s obligations to uphold the principle of non-refoulement under international and regional refugee law.

On February 5, 2021, a state corporation forcefully evicted without notice about 3,500 members of the Nubian community from their homes in Kibos, Kisumu County. The Nubian community in Kenya are descendants of soldiers transported forcibly from Sudan by the British colonial government a century ago. Currently estimated to number over 100,000, the Nubians have been unable to access Kenyan citizenship and remain stateless. Armed police used teargas to force residents out of their homes despite a court order stopping the evictions as well as a May 1, 2020, presidential moratorium on evictions the during the coronavirus pandemic. A child was trapped under debris and killed as a bulldozer brought down their homes.

In a September 2021 report on gender-based violence (GBV), Human Rights Watch found that Kenya, like other countries across the world, recorded an increase in violence against women and girls during its lockdown and ongoing nightly curfew introduced to curb the spread of the coronavirus. Despite a previous history of heightened incidences of violence against women and girls during crisis Kenyan authorities failed to institute measures to help prevent sexual and GBV; to properly investigate and prosecute cases; and to ensure survivors have access to timely medical treatment, psychosocial care, protection services, and financial assistance. In May, President Uhuru Kenyatta committed the country to ending GBV by 2026, pledging US$23 million by 2022 increasing to $50 million by 2026.

The Kenyan government has an obligation to prevent, counter, and provide redress for violence against women and girls at all times, including during crises and in humanitarian settings. In light of the ongoing Covid-19 pandemic, the government should rectify these failures and build a solid rights-based framework to anticipate future emergency-related sexual and GBV, including ahead of the planned general elections in 2022.

On September 23, the Kenya Film Classification Board (KFCB) banned a gay-themed documentary, “I am Samuel,” claiming that the film attempted to "promote same sex marriage. It is the second gay-themed film banned in Kenya, following a 2018 decision to stop cinemas from showing "Rafiki, "a lesbian love story which became the first Kenyan movie to premiere at the Cannes film festival. The ban on "Rafiki" ("friend" in Swahili) was later overturned by a court, and the film opened to sold-out audiences in Nairobi, "and the film opened to sold- but the ban was later reinstated.

Section 162 of Kenya’s penal code punishes consensual same-sex relations with up to 14 years in prison. The High Court rejected a constitutional challenge to the ban in May 2019. Activists have appealed the ruling on grounds that section 162 violates rights to equality, non-discrimination, human dignity, security, privacy, and health, all protected under Kenya’s constitution. They are currently awaiting a hearing at the Court of Appeal.

Kenya currently occupies two key international and regional leadership roles. In January, Kenya began its two-year term as a non-permanent member of the United Nations Security Council (UNSC). President Kenyatta took over as chair of the East African Community (EAC) in February. With its forces in South Sudan and Somalia, Kenya joined other nations at the UNSC in July to endorse an African Union Commission of Inquiry into the alleged atrocities committed in Ethiopia’s beleaguered Tigray region. Kenya's Permanent Representative to the UN Martin Kimani urged parties in Tigray to lay down arms. He said Kenya was looking forward to thorough investigations so that perpetrators could be held to account.

Kenya received significant support to address the challenging impact of the Covid-19 pandemic from both bilateral and multilateral partners. The United States, United Kingdom, China, European Union and individual European countries such as Germany provided material, technical and financial support to aid Kenya’s response to the pandemic. The World Bank, International Monetary Fund (IMF) and the African Development Bank have variously provided Kenya with budgetary and project supports from the outset of the pandemic. In June 2021, the World Bank approved a $750 million budgetary support, in part to aid Kenya’s pandemic response.