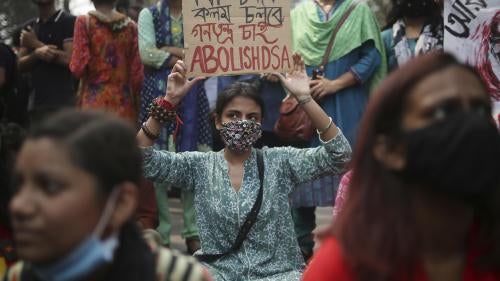 The ruling Awami League government made clear in 2021 it has no intention of addressing a pattern of grave abuses, including extrajudicial killings, torture, and enforced disappearances by its security forces. Authorities cracked down on critics, journalists, and even children who criticized the government or dared to question its response to the Covid-19 pandemic.

In September, Mohib Ullah, 46, a leader among the nearly one million Rohingya refugees in Bangladesh documenting the Myanmar military’s crimes against the Rohingya and advocating for the refugees’ rights in international forums, was shot and killed by unidentified gunmen in Kutupalong camp in Cox’s Bazar. He had faced death threats in recent years for his work. In the month following, Bangladesh authorities failed to ensure security in the camps and another seven refugees were murdered in an attack on an Islamic seminary in the camp.

In October, the government signed a Memorandum of Understanding with UNHCR to begin operations on Bhasan Char island, where Bangladesh authorities had already relocated almost 20,000 refugees in violation of its commitments to wait for a technical assessment of habitability, safety, sustainability, and protection needs.

From May to August, Bangladesh saw its most deadly wave of Covid-19 infections to date. Hospitals were overwhelmed and health care workers reported a lack of adequate medical equipment.

In October, four people died when police reportedly opened fire to contain a mob, and at least three more people died amid a spate of sectarian violence targeting Bangladesh’s Hindu minority. More than 100 are reported injured.

In August, after Human Rights Watch released a report documenting enforced disappearances by Bangladesh security forces under the Awami League-led government from 2009 to 2020, the government denied the findings. Officials also denied allegations made during a briefing held by the Tom Lantos Human Rights Commission of the United States House of Representatives. Relatives of some of those forcibly disappeared said that police refused to accept any complaint that included allegations against law enforcement and that some families faced threats and harassment.

In February, writer Mushtaq Ahmed died in prison after being held in pretrial detention for nine months for posting criticism of the government’s response to the Covid-19 pandemic on Facebook. Ahmed Kabir Kishore, a cartoonist held on similar grounds, filed a legal claim alleging he was tortured and described the torture Mushtaq had also faced in custody.

Law enforcement and intelligence agencies in Bangladesh, as well as police and soldiers seconded into the Rapid Action Battalion (RAB), are credibly accused of torture and ill-treatment of detainees and suspects. Despite insisting that it complies with international law, the government has failed to act on concrete recommendations from the UN Committee Against Torture to prevent and address torture.

Authorities use the Digital Security Act (DSA) to harass and indefinitely detain journalists, activists, and others critical of the government, resulting in a chilling effect on expression of dissent. In March, UN High Commissioner for Human Rights Michelle Bachelet called for an overhaul of the DSA. Instead, the Law Ministry approved a proposal to expand the number of special tribunals specifically for these types of cyber “crimes.”

At least 80 journalists were reportedly attacked, injured, or killed while performing their jobs in 2021, as of September. Those who expose government corruption or express dissent are particularly at risk. In May, authorities arrested journalist Rozina Islam following her reporting on malpractices in response to the Covid-19 pandemic. At least 17 journalists, a majority of them photographers, were injured covering protests over the visit by Indian Prime Minister Narendra Modi in March. During these protests, there were also reports that Facebook and Facebook Messenger services were restricted in Bangladesh.

Authorities have resorted to targeting the family members in Bangladesh of critical activists and journalists who are living abroad. With widespread repression of the media, journalists in Bangladesh have taken to self-censoring at unprecedented levels.

In May, nine organizations wrote to Michelle Bachelet, the UN High Commissioner for Human Rights, raising concerns over continuing attacks on the media, including arbitrary arrests, torture, and extrajudicial killings.

Bangladesh reported over 1 million new confirmed cases of Covid-19 and more than 20,000 deaths from January through October 2021. Just over 12 percent of the population was fully vaccinated at time of writing.

Overburdened hospitals and a scarcity of much-needed intensive care facilities have exacerbated existing disparities in access to healthcare. As of October, nearly 10,000 healthcare workers also had tested positive for the virus that causes Covid-19, according to the Bangladesh Medical Association.

At time of writing, schools had been closed for more than 450 days since the pandemic’s start in 2020. Over 1.6 million students were affected, with many facing barriers to accessing remote education, including lack of internet access, lack of electricity, and needing to work to support their families. A BRAC survey found that more than half of students surveyed were not following government-televised classes. Girls in particular faced barriers to staying in school, and nongovernmental organizations reported a concerning rise in child marriage.

According to Bangladeshi human rights organization Ain o Salish Kendra, over 200 women were reportedly murdered by their husband or husband’s family in 2021. Promises by the Bangladesh government to take sexual and gender-based violence seriously rang hollow, as women and girls faced pervasive sexual violence while the government again stalled on passing a sexual harassment law or making amendments to the discriminatory rape law.

The Bangladesh Policewomen Network launched a strategic plan for 2021-2023 to improve gender equality in the police force.

Same-sex conduct is criminalized in Bangladesh. In August, 6 men were finally convicted for the brutal murder of prominent Bangladeshi gay rights activists Xulhaz Mannan and Mahbub Rabbi Tonoy in 2016. Yet, five years after the murder, lesbian, gay, bisexual, and transgender people and advocates continued to face violence and threats of violence without adequate protection from the police.

To encourage employment, the authorities announced in June that companies where transgender people make up at least 10 percent of the workforce would be given tax breaks. Many who identify as Hijra, Kothi, or transgender in Bangladesh are facing economic devastation amid the pandemic.

In July, 52 workers, most of them women and children as young as 12, died after a massive fire broke out at a factory in Rupganj, Narayanganj District. Labor activists said that police subsequently harassed workers and relatives of the deceased who gathered to protest, and alleged that police fired rubber bullets and tear gas amid clashes with the protesters.

In August, international retailers, trade unions, and factory owners signed a new agreement to replace the Bangladesh Accord on Fire and Building Safety.

The Bangladesh government has expressed increasing frustration with shouldering the prolonged humanitarian crisis, particularly as the February coup in Myanmar made the prospect of a safe and dignified return for the refugees ever more distant.

Instead of working with the UN to shore up resources and improve conditions in the refugee camps, the government relocated nearly 20,000 Rohingya refugees to remote Bhasan Char island. Refugees on the island face inadequate healthcare, lack of education, and barriers to freedom of movement. While the authorities have said relocation to the island is voluntary, a Human Rights Watch report found that many refugees were transferred without full, informed consent and prevented from returning to the mainland or being reunited with their families in Cox’s Bazar.

Hundreds have attempted to flee the island, and many have died at sea. Others, caught trying to escape, have been arrested and held without charge for long periods, and some were beaten up by security forces.

The main refugee settlement in Cox’s Bazar is severely overcrowded, with risks of communicable diseases, fires, monsoons, and lack of prevention efforts and services for survivors of domestic and sexual violence. Refugees faced tightened restrictions on their rights to information, movement, and livelihood. Education in camp “learning centers” has been halted since March 2020 due to Covid-19 lockdowns.

Bangladesh authorities have prohibited the construction of stronger shelters in the camps capable of withstanding not just the annual monsoon, but also frequent dry-season fires. In March, barbed wire fencing trapped thousands of refugees while a massive fire spread through the camps. The number of fires has been increasing at a disturbing rate—in just the first four months of 2021 there were 84 incidents in the camps, more than in all of 2020.

Bangladesh is among the countries most vulnerable to the impacts of climate change, despite having contributed little to the greenhouse gas emissions causing rising temperatures. Due to climate change, cyclones will become more intense and frequent, posing a growing threat to tens of millions of people living along the country’s low-lying coastline, many of whom could face food insecurity due to reduced agricultural productivity and mass displacement due to rising sea levels.

During 2021, the government announced a scaling back of plans to build coal-fired power plants and the cancellation of numerous proposed projects. However, construction continues on several plants, which, when operational, will not only emit greenhouse gases but also toxic pollutants that impact the health of local populations. The plant under construction at Rampal poses a serious threat to the Sundarbans, the world’s largest mangrove forest, a UNESCO world heritage site where rich biodiversity supports the livelihood of hundreds of thousands of people and provides a critical buffer against the impacts of sea level rise and extreme weather.

In August, the Guernica 37 Chambers law offices made a formal submission to the British Foreign, Commonwealth and Development Office recommending sanctions for 15 current and former senior RAB officers for alleged involvement in human rights abuses and corrupt practices under the Global Human Rights Sanctions Regulations 2020.

In March 2021, UN High Commissioner Bachelet affirmed that “[al]legations of torture and ill-treatment by the Rapid Action Battalion have been a long-standing concern.”

Human Rights Watch addressed a letter to Commonwealth Secretary-General Baroness Patricia Scotland calling for her to publicly clarify comments she made praising Prime Minister Sheikh Hasina just days after the death of a dissident writer, Mushtaq Ahmed, in custody.

In February, 13 diplomats expressed grave concern about Ahmed’s death and called for “a swift, transparent, and independent inquiry.” The government responded by telling the media to “stop giving publicity to this sort of nuisance.”

In February, the Bangladesh chief of army staff, Gen. Aziz Ahmed, met with US military officials and high-level UN officials amid the release of a disturbing investigation by Al Jazeera alleging involvement of members of the general’s family in abuses by Bangladeshi security forces as well as the commission of grave human rights abuses by military units under his command.

The Al Jazeera investigation documented that the government had illegally purchased highly invasive spyware from Israel. The military reacted to the evidence by saying that the equipment was for an “army contingent due to be deployed in the UN peacekeeping mission.” The UN denied that it was deploying such equipment with Bangladeshi contingents in peacekeeping operations and called on Bangladeshi authorities to investigate the claims of corruption.

In August, Israeli digital intelligence agency Cellebrite announced that it would stop selling technology to Bangladesh following reports that it was being used by RAB.

Since 2017, serious shortcomings in Bangladesh’s human and labor rights record have jeopardized the trade preferences unilaterally granted by the EU through its Everything But Arms (EBA) scheme.

In September, the US announced it would contribute nearly $180 million in additional humanitarian assistance for Rohingya refugees, Bangladeshi host communities, and the people of Myanmar in response to the Rohingya refugee crisis. The UN’s Rohingya Humanitarian Crisis Joint Response Plan for 2021 had about a third of the funding it needed as of August 31.