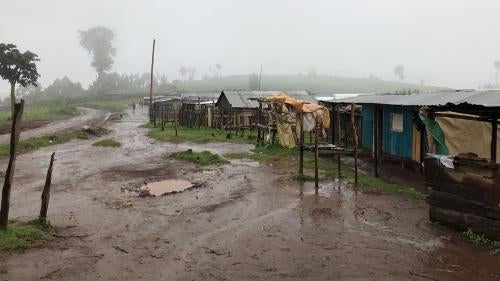 Lack of accountability for serious human rights violations by security forces, including extrajudicial killings and enforced disappearances, remain a major concern in Kenya, despite promises by President Uhuru Kenyatta to address key issues, including those that have in the past undermined Kenya’s ability to hold peaceful elections.  Kenyan authorities failed to investigate security forces abuses, including extrajudicial killings and enforced disappearances, and hold those responsible to account.

In January, armed gunmen attacked DusitD2, a hotel west of downtown Nairobi, killing at least 24 people. Al-Shabab, the Islamist armed group based in neighboring Somalia, claimed responsibility for the attack.

Lack of Accountability for Serious Crimes

Despite documentation and investigations into the violence during the 2017/2018 elections, in which more than 100 were killed, the government has yet to bring charges against any security officers. A government inquest into the killings of nine-month-old baby Samantha Pendo in Kisumu and nine-year-old Stephanie Moraa in Nairobi found at least five senior police commanders and other government officials responsible for the abuses, but authorities had yet to hold anyone to account for the killings and other violations in the election period.

There was also no progress in investigating or holding anyone to account for the violence around the 2007/2008 elections in which 1,100 people were killed.

In 2015, President Kenyatta announced plans to establish a restorative Ksh10 billion fund (approximately US$100 million) for victims of rights abuses, including of the 2007/2008 post-election violence, but did not set up the fund until April and had yet to make any payouts at time of writing.

Kenya has yet to surrender three persons wanted by the International Criminal Court (ICC) on allegations of witness tampering in cases relating to the 2007/2008 election violence. Other ICC cases against Kenyatta, Deputy President William Ruto, and a former broadcaster Joshua arap Sang, collapsed amid witness tampering allegations and state non- cooperation.

Authorities have not investigated most of the reported extrajudicial killings in Nairobi’s informal settlements. In 2018, the Independent Policing Oversight Authority (IPOA), a civilian police accountability institution, told media it was investigating 243 killings by police, but the institution appears overwhelmed by the sheer volume of the cases and undermined by the lack of cooperation police. The institution secured convictions against just three officers since it started working in 2012, media reported.

In July 2019, Human Rights Watch found that police in Kenya killed no fewer than 21 men and boys in Nairobi’s informal settlements, apparently with no justification, claiming they were criminals. Rights activists in those neighborhoods believe that, based on the cases they know about and those reported in the media, police have unlawfully killed many more in the past year. In October 2018, the Daily Nation reported that police killed at least 101 people in Nairobi and more than 180 people across Kenya in a nine-month period.

In February, Kenyan activist, Caroline Mwatha Ochieng, who worked alongside others in Nairobi to document police killings in informal settlements, died under unclear circumstances that police say are not linked to her work, as claimed by activists.

In November, a video circulated on social media showing police beating a student protester on a Nairobi university campus, prompting wide public condemnation of excessive use of force by police.

In December 2018, Human Rights Watch issued a report documenting a pattern  of harassment, intimidation and other abuses of at least 35 environmental activists in Lamu over the past five years. Security forces in Lamu have broken up protests, restricted public meetings and threatened, arrested and prosecuted activists on various charges, including terrorism.

Authorities have carried out serious abuses while evicting communities from the Maasai Mau forest, who authorities say encroached forest land. Ongoing since 2014, the evictions were especially abusive in July and December 2018, when security officials beat people, torched homes and destroyed crops, leaving thousands stranded in the cold. Human Rights Watch found at least nine people, including two babies, died during the eviction and at least four people are still missing.

Authorities have not investigated these abuses, and in August announced plans to commence a second round of evictions of another group of people still living in the forest. Kenyan and international guidelines on evictions require authorities to issue adequate eviction notice, and compensate or resettle the evictees. Evictees and communities still residing in the Mau forest have challenged the legality of the 2018 evictions and seek to stop the second round of evictions.

The Media Council of Kenya reported that between May 2017 and April 2018, there were at least 94 incidents of abuses against journalists and bloggers in Kenya, the highest in a decade. In a number of those cases, police and, in some cases individuals linked to politicians, threatened and attacked activists and journalists on duty. Authorities failed to investigate or hold anyone to account for physical attacks, harassment, and intimidation against journalists.

Police disrupted and banned protests, arresting and detaining activists, contrary to constitutional guarantees to the right to protest or picket. On July 19,  police tear-gassed and detained at least three activists who were protesting in Nairobi for peace in South Sudan. The three were later released without charge. On July 21, police arrested 12 human rights activists for holding a public meeting to discuss issues affecting a community school in Nairobi’s Mathare neighborhood. They were later released without charge.

In March, government published a new bill, the Public Order (Amendment) Bill, 2019, seeking to amend an existing law to make organizers of public meetings or protests responsible for loss of property or life and to provide compensation to those affected by the protests. If adopted, the new law would restrict free assembly and expression, contrary to the constitution, which guarantees these rights.

Authorities tried to introduce administrative measures that restrict freedom expression and media. In May, Kenya Film Classification Board, a state regulatory agency, published new strict regulations and harsher sanctions relating to both filming and exhibition of films. The regulations were however withdrawn following a public outcry.

In May, the High Court upheld sections of the penal code  that punish consensual same-sex relations with up to 14 years in prison. Three Kenya lesbian, gay, bisexual, and transgender (LGBT) activist groups have appealed the decision.

The Court of Appeal upheld two rulings that affirmed the rights of LGBT people, one pertaining to the right to freedom of association, and another allowing a transgender woman to change her name and remove the gender marker from her school-leaving certificate.

LGBT refugees and asylum seekers from neighboring countries faced attacks both in Kakuma refugee camp and in Nairobi neighborhoods. In June, police forcibly returned a group of LGBT asylum seekers from Nairobi to Kakuma, despite admissions from UNHCR that it could not ensure their safety in the camp. In response to advocacy from intersex activists, Kenya in August became the first country in Africa to include an intersex category in its census

With its forces still deployed in Somalia and South Sudan, Kenya remains a key player, and continues counterterrorism efforts, in the region. However, in 2019, the tensions between Kenya and Somalia resulting from the dispute over maritime boundaries in the oil-rich Indian ocean—to be decided by the International Court of Justice—appeared to escalate. In February, Kenya, for the third time in seven years, threatened to shut down Daadab refugee camp by August for security reasons.

In May, Kenya denied at least three Somali lawmakers and a cabinet minister entry into the country on Somali passports, resulting in a diplomatic standoff between the two countries and adding to the ongoing mistrust and tensions. Somali leaders who presented non-Somali passports were however allowed into the country.