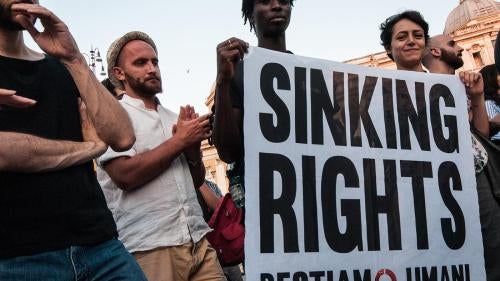 There were at least 15 stand-offs at sea as Italian authorities denied permission to NGO ships to disembark people rescued at sea. In June, then-Interior Minister Matteo Salvini pushed through a government decree, converted to law by parliament in August, allowing Italy to deny NGOs authorization to enter territorial waters, ships to be seized and their owners fined. A new government, in place since September, indicated it would reform the decree.

By mid-November, 9,942 people reached Italy by sea, according to UNHCR, a 55 percent decrease compared to 2018.

Government decrees instituted in August an accelerated asylum procedure at the border and in October a list of 13 so-called safe countries of origin whose nationals now face a legal presumption they do not need protection.

Official statistics showed that asylum applications fell by over 50 percent compared to the previous year. In the first six months of the year, rejection rates hovered around 80 percent, significantly more than the 58 percent rejection rate in 2017. This is largely due to the abolition, in late 2018, of humanitarian protection permits.

In August, the UN High Commissioner for Human Rights (OHCHR) expressed serious concern over an increase in intolerance, racial and religious hatred and xenophobia, and the role of political leaders and members of government in allowing or encouraging these phenomena. The Italian NGO Lunaria reported a significant increase in violent racist crime in 2018: 126 incidents compared to 46 in 2017.