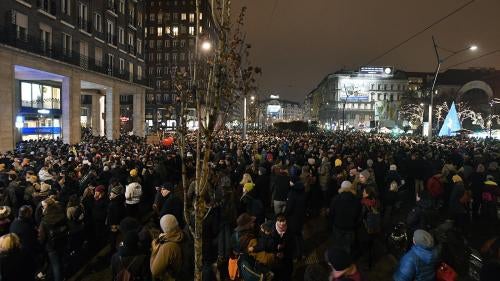 Hungary’s government continued its dismantling of democratic institutions and the rule of law.

In November, the government proposed changes to the administrative courts that would allow state institutions to appeal unfavourable administrative court decisions to the Constitutional Court, where a majority of the judges are close to the ruling party. This could affect issues like corruption, elections, and police conduct. The measures were before parliament at time of writing and expected to be adopted in December.

The move follows an unsuccessful attempt by the government to establish a new administrative court system overseen by the Ministry of Justice, adopted by the Hungarian parliament in December 2018, but scrapped in May 2019 after criticism from EU and Council of Europe’s Venice Commission about the lack of checks and balances.

In June, the government renewed its attacks on academic freedom by introducing a law, approved by parliament, that increases state control over the Academy of Sciences, Hungary’s largest and oldest academic institution. The law gives the government greater influence over scientific research and funding.

Hungarian authorities continued to limit the number of asylum seekers permitted to enter at border crossings to one or two asylum-seeking families per week, leaving thousands stranded in poor conditions in Serbia. According to UNHCR estimates, by early September, more than 300 people were detained in the two transit zones, including about 170 children. Pushbacks to Serbia remain a concern.

In February, the government resumed its policy of denying food to rejected asylum seekers in the transit zones on Hungary’s border with Serbia. By August, the Hungarian Helsinki Committee, a civil society organization, had submitted emergency interventions on behalf of 27 food deprived asylum seekers to the European Court of Human Rights (ECtHR), which in all cases ordered the government to resume food distribution. The government complied with the orders in each case.

In July, the European Commission launched legal action against Hungary over the practice and referred to the EU Court of Justice the 2018 law criminalizing support to asylum seekers by non-governmental organizations. The Commission escalated the case in October. In October, the European Court of Human Rights ruled that the government’s decision in 2015 to deny a journalist access to a refugee reception center violated media freedom.

In March, Fidesz was suspended from the European People’s Party (EPP), the main centre-right European political family, for breaching the group’s values concerning rule of law and fundamental rights but was allowed to remain part of the EPP group in the European Parliament. An internal investigation was ongoing at time of writing.

The government has yet to ratify the Istanbul Convention, with a minister describing it in July as “political hysteria.” There are no reliable statistics about domestic violence in the country.

Roma continued to face discrimination in housing, education, and public health care, according to the EU Fundamental Rights Agency.