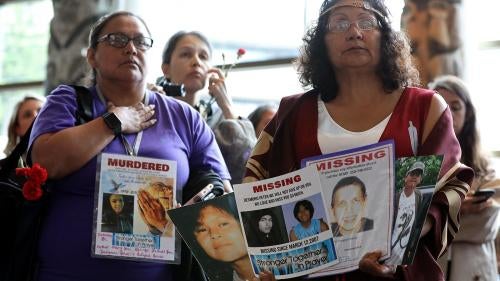 Canada is a diverse, multi-cultural democracy that enjoys a global reputation as a defender of human rights and a strong record on core civil and political rights protections guaranteed by the Canadian Charter of Rights and Freedoms. The government of Prime Minister Justin Trudeau has made notable efforts to advance human rights in Canada. The Trudeau government has been a vocal advocate for a pluralistic society that respects the rights of immigrants, people with disabilities, lesbian, gay, bisexual, and transgender (LGBT) people, and other minorities.

Despite these efforts, Canada continues to struggle to address longstanding human rights challenges, including wide-ranging abuses against Indigenous peoples, the continued confinement of immigration detainees in jails, and a prison law that does not rule out prolonged solitary confinement. Canada also grapples with serious human rights issues relating to the overseas operations of Canadian extractive companies, and persistent exports of military equipment to countries with a record of human rights violations.

There remain considerable challenges to undoing decades of structural and systemic discrimination against Indigenous people in Canada. While Canada officially removed its objector status to the United Nations Declaration on the Rights of Indigenous Peoples (UNDRIP) in 2016 and vowed to implement UNDRIP in accordance with the Canadian Constitution, a private member’s bill to ensure that Canadian laws are in harmony with UNDRIP failed to pass in the Senate in June.

Inadequate access to clean, safe drinking water continues to pose a major public health concern in many Indigenous communities—and continues to impede efforts to advance Indigenous rights in Canada, one of the world’s most water-rich countries. The government has committed to end all drinking water advisories on First Nations reserves by 2021. As of September, 56 First Nations communities across Canada remained subject to such long-term water advisories, which alert communities when their water is not safe to drink.

In September, the Canadian Human Rights Tribunal found that the federal government willfully and recklessly discriminated against Indigenous children living on reserves by failing to provide funding for child and family services. The Trudeau government filed an application seeking a judicial review of the ruling in October.

In January 2019, the United Nations Human Rights Committee found that Canada, through the long-controversial Indian Act, was still discriminating against First Nations women and their descendants. In August, the Trudeau government announced that First Nations women would be treated equally under the Indian Act, enabling them to retain their Indigenous status if they marry non-Indigenous men.

In June, the National Inquiry into Missing and Murdered Indigenous Women and Girls—launched by the government in 2016 to address endemic levels of violence against Indigenous women and girls—released its final report. The inquiry made 231 recommendations and concluded that acts of violence against Indigenous women and girls amount to “genocide.” Prime Minister Trudeau vowed that the government will develop a national action plan to “turn the inquiry’s calls to justice into real, meaningful, Indigenous-led action.”

Despite the introduction of a National Immigration Detention Framework that aims to reduce the use of jails and improve detention conditions, Canada continues to confine many immigration detainees in jails. According to the CBSA,  7,212 immigration detainees were detained in holding centers in 2018-19, up from 6,609 the previous year.

Canada is home to two-third of the world’s mining companies and its dominant position creates an opportunity to take the lead in addressing human rights challenges in the extractives sector. However, no Canadian law provides a mechanism to allow authorities to exercise meaningful scrutiny and oversight of the human rights impact of Canadian extractive companies operating overseas.

In January, the Supreme Court of Canada heard a civil suit against Canadian firm Nevsun Resources, involving alleged gross human rights abuses, including slavery, torture, and forced labor, at an Eritrean mine. It is expected to be a precedent-setting decision on whether Canadian courts can hold Canadian corporations accountable for human rights violations committed abroad.

Since 2011, Human Rights Watch has urged the Canadian government to establish an ombudsperson’s office with a mandate to independently investigate and publicly report on human rights abuses involving Canadian extractive companies and hold responsible parties accountable. The Trudeau government has backpedaled on its previous commitment to create such an office.

Instead, in April, the government announced the establishment of the Canadian Ombudsperson for Responsible Enterprise (CORE), an advisory post, with few investigative powers and limited capacity to hold corporations accountable. This position is not independent, but rather reports as an advisor to the minister of international trade diversification.

The Canadian Parliament is exploring options for a modern slavery law. Following a private member’s bill and ongoing government consultation, an all-party parliamentary group announced in April a draft Transparency In Supply Chains Act (TSCA), which seeks to impose obligations, including a legal duty of care, on Canadian businesses to actively take steps to prevent the use of modern slavery in their overseas supply chains.

In June 2019, the Canadian province of Quebec passed Bill 21 banning certain categories of  public employee from wearing religious symbols at work. Teachers, judges, police officers, among other civil servants, are prohibited from wearing symbols of their faith (including hijabs, kippahs, and turbans) in the workplace. The controversial law also prohibits anyone with religious face coverings from receiving government services, including healthcare and public transit. In enacting the ban, Quebec preemptively invoked the exceptional “notwithstanding” clause, which allows provincial or federal authorities to temporarily  override some of the guarantees of the Charter of Rights and Freedoms, making it difficult to overturn the law in the courts.

In May, three United Nations special rapporteurs warned that the law is “likely to undermine the freedom of conscience, religion and equality of citizens.”

After years of activism by disability rights advocates, Canada passed the Accessible Canada Act in June 2019. The act, which seeks to make Canada barrier-free by 2040, requires federally regulated sectors—including banking and telecommunications—to comply with forthcoming accessibility regulations in employment, programs and service delivery, buildings and public spaces, and transportation that operate across provincial or federal borders. The act does not apply to provincially regulated sectors, although Ontario, Manitoba, and Nova Scotia have implemented accessibility legislation. British Columbia has committed to implement accessibility legislation.

In May, the UN special rapporteur on hazardous substances, Baskut Tuncak, visited Canada to evaluate the federal government’s progress on managing toxic materials and their effect on human rights. The rapporteur found that Indigenous people are disproportionately affected by toxic waste and expressed disappointment at the failure of both the province of Ontario and the federal government to address the health consequences of mercury contamination in the First Nation community of Grassy Narrows.

Canada, as a member of the Lima Group—together with states from Latin America—has consistently pressed Venezuelan authorities to address the ongoing political, humanitarian, human rights, and economic crisis in the country. In response to human rights violations by the government of Nicolás Maduro, Canada imposed several rounds of targeted sanctions and temporarily suspended its diplomatic operations in Caracas. In April, Canada imposed sanctions on 43 more individuals, bringing the total to 113 Venezuelan officials subject to Canadian sanctions.

In June, Canada announced sanctions against Nicaragua for its systematic human rights violations. The measures include asset freezes and travel bans on nine Nicaraguan government officials. Then-Foreign Minister Chrystia Freeland said that the Nicaraguan government must be “held accountable” and must end the current crisis through “real dialogue with opposition groups.”

In September, the Canadian government acceded to the international Arms Trade Treaty and faced increasing pressure from a coalition of civil society organizations to end its $15-billion arms contract with Saudi Arabia and release the findings of its 2018 review of military export permits to the kingdom. Canada has yet to suspend existing arms sales to the Saudi-led coalition despite policy guidelines urging close control over exports of military equipment to countries with a record of human rights violations.

In June, 34 senators and more than 100 human-rights organizations and advocates sent a joint letter to then Foreign Minister Freeland urging Canada to take more international action to hold Myanmar accountable for the genocide of the Rohingya people by initiating proceedings before the International Court of Justice (ICJ) for breaching the UN convention against genocide.

At the June session of the UN Human Rights Council, Canada joined 24 other governments in urging China to end its mass arbitrary detentions and other violations against Muslims in Xinjiang region. The joint statement also called on China to cooperate with the UN high commissioner for human rights and UN experts to allow unfettered access to the region.

In 2019, Canada also co-presented with other states resolutions on Venezuela, Nicaragua, Yemen, and Sri Lanka at the UN Human Rights Council.