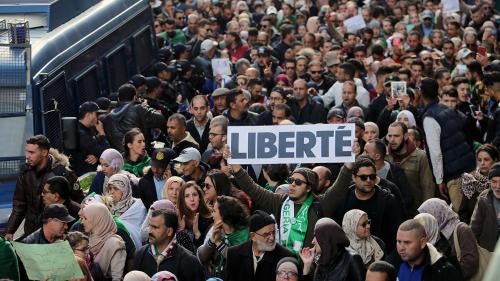 Algeria in 2019 experienced the largest and most sustained anti-government demonstrations since gaining independence in 1962. Beginning February 22, Algerians flooded the streets every Friday in the capital Algiers and elsewhere, first to protest the re-election bid of their four-term president, Abdelaziz Bouteflika, who has appeared publicly only rarely since suffering a debilitating stroke in 2013; then, after his resignation on April 2, to demand a transition to more democratic governance. 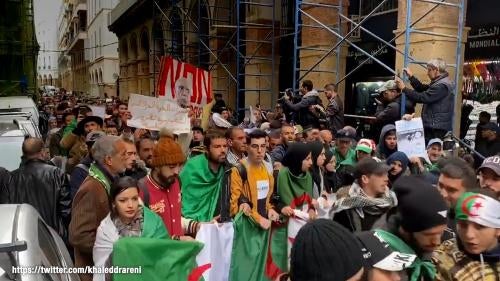 While large anti-government street protests occurred weekly, police forces deployed massively in the capital’s downtown streets and squares and at checkpoints, effectively limiting the number of people who could reach the marches, and then tightly controlling those who did. Authorities arrested hundreds of peaceful protesters, releasing most without charge after a few hours but prosecuting and imprisoning dozens.

Authorities arrested and charged 86 persons between June and October according to the National Committee of the Release of Detainees. All were accused of “harming the integrity of the national territory,” including for carrying the flag symbolizing the country’s Kabyle, or Berber, population. This charge can result in a sentence of up to 10 years in prison, under penal code Article 79. As of October, six had been tried and acquitted, one was freed pending trial, and 79 remained in prison awaiting trial.

On February 7, human rights activist Hadj Ghermoul, 37, was sentenced to six months in prison for “offending a state institution” after he posted a picture of himself carrying a sign near the northwestern city of Mascara expressing opposition to a fifth mandate for President Bouteflika. Local authorities said he was arrested while drunk and insulting police forces.

On July 9, a first instance court near Algiers sentenced Mouaffak Serdouk, a 40-year-old supporter of Algeria’s football team, to a year in prison for “publicly displaying a paper that can harm the national interest.” He had stood near a stadium in Cairo where the Algerian team was playing, carrying a sign demanding the departure of those who hold power in Algeria, before being deported to Algeria, where he was prosecuted and sentenced.

On June 30, police arrested 87-year-old Lakhdar Bouregaa, a prominent veteran of Algeria’s independence war, at his home in Algiers. The arrest came four days after he said at a public meeting, later broadcast on YouTube, that Algeria’s army is a collection of “militias.” An investigative judge opened an investigation for “weakening the morale of the army,” a charge that could lead to a prison sentence of up to 10 years.

On September 11, authorities arrested Karim Tabbou, spokesperson of the Democratic and Social Union (UDS) opposition party, in front of his house in Douira, and charged him with “participating in undermining the morale of the army” after he publicly criticized  Gaid Salah. Authorities released Tabbou on September 25, then rearrested him the next morning. On October 2, an investigating judge in Algiers opened an investigation based on him “inciting violence” and “harming national unity by publishing statements and videos on social media.” If convicted, he faces prison and a deprivation of his civil rights, including the right to run for office.

On September 25, a military court in Blida sentenced Louisa Hanoune, leader of the Labour Party, to 15 years in prison for “harming the authority of the army” and “conspiracy against the authority of the state.” She was prosecuted alongside Said Bouteflika, the ex-president’s brother, and Gen. Mohamed “Tewfik” Mediene, former head of Algeria’s most powerful intelligence service. International human rights standard prohibits the trial of civilians before military courts.

Authorities charged Salah Dabouz, a former president of the Algerian League for the Defense of Human Rights (LADDH), with “insulting” the judiciary for Facebook posts in which he criticized the prosecution of members of the Mozabite ethnic minority. Dabouz was provisionally released on April 7 but required to report three times a week to authorities in Ghardaia, 600 kilometers from his home in Algiers. Authorities lifted this reporting requirement on July 24. He was awaiting trial at time of writing. On September 9, an unknown man attacked him with a knife in Ghardaia, injuring him on both arms.

Kamaleddine Fekhar, a leading activist for the rights of the Mozabite minority in Algeria, died May 28 after a prolonged hunger strike in prison. Authorities had arrested Fekhar on March 31 and placed him in pretrial detention for “undermining” state institutions. Fekhar had completed an earlier sentence for charges that included violence against state officials, incitement to violence, hatred and discrimination, distributing material harmful to the national interest, and defamation of state institutions, following ethnic clashes between Mozabites and Arabs in and around Ghardaia between 2013 and 2015.

The Algerian penal code punishes with three to five years in prison and/or a fine whoever “offends the Prophet and God’s messengers, denigrates the dogma or precepts of Islam by whatever means.” Authorities have used this article to sentence members of the tiny Ahmadiyya community, which practices a version of Islam different from the officially recognized dogma.

A 2006 ordinance discriminates against non-Muslims by subjecting them to constraints that do not apply to Muslims. Collective worship by non-Muslims can only be organized by government-licensed religious organizations in designated places. The Protestant Church of Algeria said that in the year ending in October 2019, authorities had shuttered nine of their churches because they lacked permission or were not suited to receive the public.

Since at least December 2016, Algeria has rounded up and summarily expelled en masse thousands of Sub-Saharan migrants, including women and children. Algerian authorities reportedly expelled almost 5,000 people during the first half of 2019, most of them Nigerian.

While Algeria’s 2015 law on domestic violence criminalized some forms of domestic violence, it contained loopholes that allow convictions to be dropped or sentences reduced if victims pardoned their perpetrators. The law also did not set out any further measures to prevent abuse or protect survivors. Article 326 of the penal code allows a person who abducts a minor to escape prosecution if he marries his victim.

Algeria’s Family Code allows men to have a unilateral divorce without explanation but requires women to apply to courts for a divorce on specified grounds.

Same-sex relations are punishable under article 338 of the penal code by up to two years in prison.

Authorities deported a Human Rights Watch official, Ahmed Benchemsi, on August 19. They held Benchemsi’s passports for 10 days after arresting him on August 9 near a demonstration in Algiers and holding him for 10 hours. They confiscated his cellphone and laptop computer, which they returned when deporting him. Benchemsi was visiting Algeria to observe human rights conditions.

Authorities expelled several international journalists covering protests. Tarek Amara, a Reuters journalist and Tunisian national, was expelled on March 31, after being detained for reporting on a March 29 protest against Bouteflika. Aymeric Vincenot, AFP bureau chief, was forced to leave the country on April 9, after authorities declined to renew his accreditation.

The Polisario Front government-in-exile that administers the camps in Algeria’s southern desert for refugees from Western Sahara detained three critics on suspicion of treason, acts of aggression against the Sahrawi State, and incitement to disobedience and slander, apparently over Facebook posts they published and private messages they exchanged on social media apps. Activists Moulay Abba Bouzid and Fadel Mohamed Breica, and Mahmoud Zeidan, a journalist, were arrested between June 17 and 19. They spent five months in custody, during which they alleged harsh conditions of interrogation, including torture threats and coercion, to confess. The men were acquitted of all charges and freed on November 11.

On October 2, authorities deported French parliamentarian Mathilde Panot and three other French citizens after they had come to Bejaia to express their support with protesters. Authorities denounced “foreign interference and an attack against Algerian sovereignty.”

On September 13, Marie Arena, chair of the European Parliament’s Subcommittee on Human Rights, denounced “arbitrary arrests” and demanded the release of “political prisoners” in Algeria. On September 30, the European Union issued a statement highlighting “the importance of guaranteeing freedom of speech and assembly” to Algerians, but failing to denounce the wave of arrests and the crackdown on dissent in general.