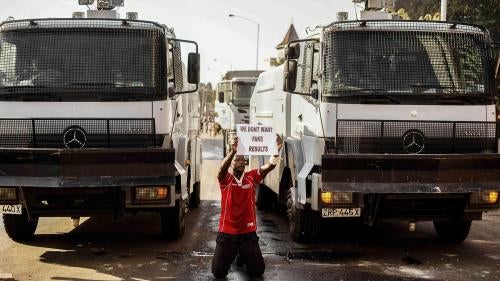 Relatively peaceful national elections marred by disputed results and post-election violence signified that little had changed in Zimbabwe in 2018. The declaration of Emmerson Mnangagwa as winner of the July 30 presidential race, which for the first time in 30 years did not have former President Robert Mugabe on the ballot, was followed by a military crackdown on political opponents. Mugabe’s ouster by the military in November 2017 paved the way for his erstwhile deputy, Mnangagwa, to take over the reins of power as interim president, and then as ruling ZANU-PF flagbearer in the national elections.

On August 1, soldiers shot and killed at least six people during opposition protests in the capital, Harare.  Mnangagwa later established a commission of inquiry into the post-election violence, chaired by former South African President Kgalema Motlanthe. At time of writing, the commission had not published its findings.

Throughout the year, Mnangagwa and other high-level government officials made numerous promises to deliver governance reforms to mark the post-Mugabe era, but took few steps to demonstrate commitment to accountability, justice for human rights abuses, and respect for the rule of law. Mnangagwa, who has his own long record of human rights abuses, called on Zimbabweans in December 2017 “to let bygones be bygones,” paving the way for continued widespread impunity for abuses by the military and state security agents.

The administration has also struggled to revive the economy, and to effectively respond to the outbreak of cholera in August, which killed at least 50 people and infected thousands in Harare.

The Mnangagwa administration failed to amend or repeal repressive laws such as the Access to Information and Protection of Privacy Act (AIPPA), the Public Order and Security Act (POSA), and the Criminal Law (Codification and Reform) Act. These laws were used under Mugabe to severely curtail basic rights through vague defamation clauses and draconian penalties. Partisan policing and prosecution worsened the impact of the repressive provisions in the AIPPA and POSA laws.

Three years after Zimbabwe’s Constitutional Court declared child marriage unconstitutional and set 18 as the minimum marriage age, the government has not put structures in place to implement the court decision and ensure that girls under 18 are not forced into marriage. Although Zimbabwe’s 2013 constitution stipulates that “no person may be compelled to enter marriage against their will” and required authorities to ensure that children are not pledged into marriage, the government has yet to amend or repeal all other existing marriage laws that still allow child marriage.

During his State of the Nation address on September 18,  Mnangangwa said that the current parliament is expected to consider the Child Justice Bill and the Marriages Bill, which seek to provide a child justice system and outlaw child marriages. The parliament has yet to consider these bills at time of writing.

Critical steps have not been taken to address the routine eviction of widows from their marital homes and confiscation of their property by in-laws with little recourse to the formal justice system,  which Human Rights Watch documented in 2017. Many of the victims continue to struggle to claim rights for reasons unique to their status as widows. Few women formally own the property held during their marriage. As a result, they were unable to keep jointly held property upon the death of their husband.

Section 73 of the Criminal Law (Codification and Reform) Act, 2004 punishes consensual same-sex conduct between men with up to one year in prison or a fine or both. This restrictive legislation contributes to stigma and discrimination against lesbian, gay, bisexual, and transgender (LGBT) people. In September, a teacher at a Harare school who came out as gay resigned after he received death threats from members of the public over his sexual orientation.

Ahead of the July 2018 national elections, representatives of the LGBT community in Zimbabwe met with top ruling ZANU-PF party officials. The Gays and Lesbians of Zimbabwe (GALZ) advocacy group thanked Mnangagwa for this unprecedented meeting and for "understanding" them better than his predecessor Mugabe and the opposition parties.

The Ministry of Health on September 6 declared a cholera outbreak in Harare after confirmation of 11 cases. The government subsequently declared a national emergency after scores had died and thousands became infected. Between August 2008 and July 2009 Zimbabwe experienced Africa’s worst cholera epidemic in 15 years when more than 4,000 people died and over 100,000 were infected. The conditions that allowed the devastating epidemic to flourish in 2008 persisted in 2018: little access to potable water, inadequate sanitation services, and limited information on water quality.

Authorities continued to ignore human rights provisions in the country’s 2013 constitution. The government did not enact new laws or amend existing legislation to bring them in line with the constitution and Zimbabwe’s international and regional human rights obligations.

The Zimbabwe Human Rights Commission on August 7 strongly condemned the use of live ammunition and excessive force against unarmed protesters in Harare in August when the military fatally shot at least six people.  Security forces have intensified a crackdown on supporters of the opposition Movement for Democratic Change Alliance (MDCA) in the aftermath of post-election protests in Harare. They also beat up and harassed scores of people in Harare as they searched for opposition party officials.

The whereabouts of pro-democracy activist and human rights defender Itai Dzamara remains unknown. He was abducted on March 9, 2015.

In October, prominent activist and director of Zimbabwe Peace Project, Jestina Mukoko, a victim of enforced disappearance and torture for three weeks by state agents in December 2008, finally received compensation after a Zimbabwe High Court ordered the state to pay her US$150,000.

The AU and SADC adjudged the July 2018 elections as peaceful and in accordance with the SADC Principles and Guidelines Governing Democratic Elections, which were established to promote regular free and fair, transparent, credible and peaceful democratic elections in the region.

International observer missions, including those of the European Union, the AU, SADC and the Commonwealth, issued a joint statement on August 2 appreciating the generally peaceful and orderly pre-electoral and voting day environment, but expressing grave concern about the post-election violence. They condemned vandalism and destruction of property and called on political party supporters to abide by the law. They also denounced the excessive use of force to quell protests and urged the police and army to exercise restraint.