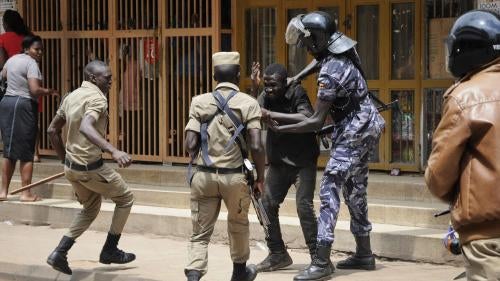 Uganda’s constitutional court upheld Parliament’s 2017 constitutional amendment to remove age limits for presidential candidates, paving the way for President Yoweri Museveni, in power since 1986, to run in all future elections. Allegations of widespread repression and intimidation of parliamentarians during debates marred the amendment process.

Violations of rights to freedoms of association, expression, and assembly persisted, as security forces beat and at times, tortured and arbitrarily detained protesters, journalists and opposition members. Thirty-three people, including six parliamentarians, arrested during by-election campaigns in Arua, northwestern Uganda, faced treason charges and alleged torture by security forces. Police and soldiers beat and detained journalists reporting in Arua and at ensuing protests.

Despite various government commitments to hold security forces accountable for their conduct, many investigations into military and police abuses of civilians failed to progress, including into the November 2016 killing of more than 100 civilians in Kasese, western Uganda, and the killings of protestors in September 2009 and April 2011.

In July, the government implemented a social media tax requiring users of WhatsApp, Twitter, and Facebook, among other sites, to pay a daily fee of 200 Ugandan Shillings (US$0.05). At a protest march against the tax in Kampala on July 11, police fired live bullets and tear gas to disperse the demonstration which the police deemed “illegal.” Protestors argued the tax violated Ugandans rights to free expression and information.

In June, security officials in Kitgum, northern Ugandan, banned a song by musician Bosmic Otim that was critical of government officials for being “misleading” and “inciting violence.” The song criticized four parliamentarians for allegedly being sycophants of government and unresponsive to citizens’ problems in northern Uganda.

On June 5, police arrested six people as they attempted to petition police leadership at Naguru Police Headquarters in Kampala as part of a protest over numerous kidnappings and unresolved murders of women and children. Anti-terrorism and anti-riot police were deployed to block the activists from accessing the premises.

Media Freedom and Attacks on Journalists

On February 14, five unidentified men wearing military uniforms seized Charles Etukuri, an investigative journalist with New Vision, outside the newspaper’s Kampala offices days after he published an article linking Internal Security Organisation agents to the death of a Finnish businessman. Etukuri said his abductors demanded he reveal his sources. He was released after six days following a court ruling.

On August 13, security personnel arrested journalists Herbert Zziwa and Ronald Muwanga as they covered the Arua by-election and the military’s fatal shooting of Yasin Kawuma, parliamentarian Robert Kyagulanyi’s (aka Bobi Wine) driver. Security forces tied and beat Zziwa and Muwanga before holding them overnight in Gulu, charging them with malicious damage to property and incitement of violence. They were later released on bond.

On August 20, soldiers beat and detained journalists covering protests, including photojournalist James Akena, confiscating and damaging his equipment. In September, police detained at least eight journalists and confiscated their equipment as they sought to report on Kyagulanyi’s return from the United States for medical treatment following his alleged torture by soldiers. Despite the military’s stated commitment to investigate soldiers for beating journalists, no one had been held accountable at time of writing.

In March, John Martin Okoth Ochola was appointed Inspector General of Police. His predecessor, Kale Kayihura, was arrested three months later, brought before a military court and charged with failing to protect war materials, failing to supervise police officers and abetting the kidnap and forced repatriation of Rwandan refugees. He has been released on bail but charges remain pending. No charges have been brought against him for commanding units involved in torture or extrajudicial killings, despite credible allegations of such crimes during his leadership.

In April, Okoth Ochola ordered that the Nalufenya detention facility in Jinja, Eastern Uganda be redesignated from a special force operation base to a standard police station. This was significant because Nalufenya had been notorious as a place of torture and long-term detention without trial. In May, Okoth Ochola disbanded the police Flying Squad Unit, established in 2013 to counter armed robberies, but which has been implicated in multiple serious allegations of extortion and torture.

On August 13, Ugandan police and military arrested and beat six opposition members of parliament, including Francis Zaake and Kyagulanyi, and 28 other people in advance of the August 15 by-elections in Arua. Prosecutors charged all 34 with treason for allegedly throwing stones at a presidential convoy on August 13. The media reported that men in military uniform took Zaake, who was unconscious, to a hospital in Kampala and abandoned him. Kyagulanyi alleged Special Forces Command soldiers tortured him while was detained for 10 days by the military. He was also charged before a military court for illegal possession of firearms and ammunition, but the charges were later dropped. Authorities promised to investigate Kyagulanyi’s allegations of torture.

Police and military shot and killed at least six people in Kampala, Mityana, Katwe and Gomba, during protests against security forces’ abusive conduct in the period around the Arua by-election.

In recent years, offices of over two dozen non-governmental organizations (NGOs) have been robbed, and some of their security guards killed, but police failed to credibly investigate the attacks. The targeted groups worked on “sensitive issues” including human rights, land and resource governance and corruption.

On February 8, unknown assailants broke into the offices of Human Rights Awareness and Promotion Forum, which provides legal services to marginalized groups such as LGBTI people, and disabled its security system. Two guards were severely injured. On August 6, unidentified people broke into Isis-WICCE, a women’s rights organization, and stole computer processors, hard drives, and cash. In September, Twerwaneho Listeners Club, a human rights organization in Fort Portal, in western Uganda, reported three forced entries into its offices in a single month.

In April, International Criminal Court (ICC) prosecutors in The Hague, completed their case against alleged former Lord’s Resistance Army (LRA) commander Dominic Ongwen, charged with 70 counts of war crimes and crimes against humanity. Ongwen’s defense began its case in September. Two ICC warrants remain outstanding for the arrest of Joseph Kony, long-time LRA leader and Vincent Otti, who is presumed dead. The LRA remains active in central Africa, but there have been fewer media reports of killings and abductions.

On August 30, the International Crimes Division (ICD) of Uganda’s High Court confirmed charges against alleged former LRA commander Thomas Kwoyelo – in custody since his capture in the Democratic Republic of Congo (DRC) in 2009.The trial began in September but was quickly adjourned until November , when Kwoyelo pled not guilty to all 93 counts against him.

Pre-trial sessions in the case against Jamil Mukulu, alleged leader of the rebel Allied Democratic Forces (ADF), captured in Tanzania in April 2015, started at the ICD. Mukulu and 34 others are charged with terrorism, multiple murders, aggravated robbery and crimes against humanity over several years.

Uganda’s colonial-era law continues to prohibit “carnal knowledge” among people of the same sex and crackdowns on LGBTI activists continued. On May 17, police and the Minister of Ethics and Integrity, Simon Lokodo shut down a celebration of the International Day Against Homophobia, Biphobia and Transphobia organized by the NGO Sexual Minorities Uganda. In May, Lokodo vowed to block the health ministry’s first Annual Conference on Key and Priority Populations, arguing it would promote “homosexuality and other dirty things.” The conference did not take place.

Years of security forces’ forced evictions in Apaa, Northern Uganda gained attention in June when 200 residents traveled 100 kilometers to seek refuge at the UN Office of the High Commissioner for Human Rights (OHCHR) in Gulu after soldiers allegedly torched homes, beating and killing a resident. Following a month of negotiations between OHCHR, the community and government, residents elected to return home, but reported that forced evictions have continued.

The United States, United Kingdom and the European Union continue to provide funding for logistics and training to the African Union Mission in Somalia where Uganda contributes troops. The US has been a significant donor to Uganda’s military, providing training to thousands of soldiers, through the Africa Contingency Operations Training and Assistance (ACOTA) program, among other funding streams.

International donors echoed domestic criticism of security forces’ conduct during and after the Arua by-election. The US State Department said it was “gravely concerned” by reports of torture, and that “such human rights abuses are unacceptable.” In September, the European Parliament in a 14-point resolution called for the investigation and prosecution of security officers for torture and extrajudicial killings. However, neither the US nor EU announced specific changes in support to Uganda’s security forces.

Uganda hosts over one million refugees, primarily from South Sudan and the DRC. In June, the UN and Uganda sought at least $2 billion to support refugee assistance but raised significantly less.