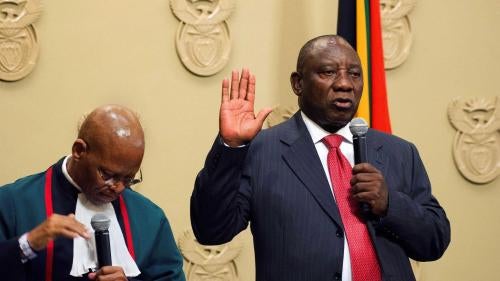 Former President Zuma appeared in court three times on charges that include fraud‚ corruption, and racketeering. On November 16, ahead of the beginning of his criminal trial on corruption charges, Zuma applied to the KwaZulu-Natal High Court seeking a permanent stay in the court case citing bias of the prosecution. At time of writing, the court had not ruled on the matter.

The government did not fulfil the right to education for many of South Africa’s children and young adults with disabilities. Under-reporting of rape, challenges in the criminal justice system, and the absence of a comprehensive national strategy remained challenges to combatting high rates of violence against women throughout the year. In 2018, the government continued to send mixed signals about its position on the International Criminal Court (ICC) and international justice following a domestic court’s rejection of the government’s withdrawal notice to the ICC as unconstitutional and invalid. In September, the international relations minister indicated the government would review its previous decision to withdraw from the ICC.

In August, South Africa ended its one-year term as chairperson of the Southern African Development Community (SADC), during which it did not use the role to promote or support human rights improvements in the region.

Across South Africa, a high number of cases continued to be reported of corporal punishment, violence, abuse, neglect, and inequality involving children with disabilities, especially children with autism spectrum disorder and children with psychosocial and/or intellectual disabilities, by teachers and peers in schools and school hostels.

In February, retired Judge Dikgang Moseneke concluded an arbitration hearing over the 2016 mass transfers of mentally ill patients that resulted in the death of at least 144 after their forced removals from Life Esidimeni facilities. Moseneke highlighted poor accountability on the part of state authorities as mental health care patients were transferred to 27 centers operating without valid licenses by nongovernmental organizations. Judge Moseneke ordered that the government to compensation of various sums to families of the Life Esidimeni tragedy, and to provide counselling and support services.

African foreign nationals in South Africa, including refugees and asylum-seekers, continued to face xenophobic violence and threats of violence in 2018. In May, the KwaZulu-Natal Premier Willies Mchunu met with foreign shop owners after the Northern Region Business Association ordered them to close their businesses or face attacks. The provincial government leadership promised to increase police protection to prevent another wave of xenophobic violence.

In August, at least four people died when xenophobic violence erupted in Soweto, south of Johannesburg. Mobs of protesting locals beat foreign nationals, mostly Somalis, and looted their shops. The protesters accused foreign nationals of selling fake and expired food products. A few days after the Soweto violence, a new anti-foreigner political group marched in Johannesburg, demanding the deportation of all undocumented foreigners in South Africa by the end of the year.

Virtually no one has been convicted over past outbreaks of xenophobic violence, including for the Durban violence of April 2015 that displaced thousands of foreign nationals, or the 2008 attacks, which resulted in the deaths of more than 60 people across the country. The government has yet to finalize the draft national action plan to combat racism, racial discrimination, xenophobia and related intolerance, or provide a mechanism for justice and accountability for xenophobic crimes.

Widespread and mostly underreported gender based violence, including rape and domestic violence, continued across the country in 2018.

South Africa’s law criminalizes the sale and purchase of sex, as well as related activities, such as keeping a brothel or living on the earnings of sex work. However, in part because criminalization may be interpreted as being at odds with South Africa’s constitution, decriminalization has been under active discussion for nearly a decade.

The Choice on Termination of Pregnancy Act, a progressive abortion law, has not translated into unhindered access for women seeking to terminate pregnancies. Barriers included health workers’ refusal to provide abortions mostly on the grounds of religious or moral beliefs, including the unregulated practice of conscientious objection.

The government continued to debate land reform. In July, the ruling African National Congress indicated its intent to seek an amendment of the constitution to clarify constitutional provisions that grant the government powers to expropriate without compensation. The proposed legislation would set out conditions under which land expropriation without compensation could occur.

In September, President Ramaphosa created a 10-member advisory panel that would support an Inter-Ministerial Committee on Land Reform to lead public consultations on the proposed amendments. The committee had not made any proposals at time of writing.

During 2018, community environmental rights activists were harassed for demanding their rights to health and a healthy environment. South Africa is one of the world’s biggest coal producers, and a leading producer of a wide range of metals. The serious environmental, health, and social impacts of mining, coupled with a lack of transparency, accountability, and consultation, have increased public opposition to mining projects.

No one has been identified or arrested for the murder of Sikhosiphi Rhadebe, a Xolobeni community activist who was killed in 2016. His family said the investigation into his murder has stalled. Community activism against harmful impact of mining, like Rhadebe’s, has often been met with harassment, intimidation, and violence. On July 11, for example, unidentified gunmen shot and killed Panza and Shange, two activists who opposed relocation of the community in KwaDube in KwaZulu Natal (KZN).

In an October speech in Cape Town, President Ramaphosa strongly supported the rights of the LGBTI community, stating that “the violation of the rights and equal worth of lesbian, gay, bisexual, transgender or intersex people demeans our common humanity as South Africans. Not only does it expose individuals to pain, suffering and even violence, but it often limits access to social services and economic opportunities for LGBTI people in our country.”

South Africa has a progressive constitution that prohibits discrimination on the basis of sexual orientation and protects the human rights of LGBTI people. The Department of Justice and Constitutional Development has taken significant steps to improve coordination between government and civil society in combatting violence (including rape and murder) against lesbians and transgender men.

For instance, in March 2011, the Minister of Justice and Constitutional Development mandated the establishment of a National Task Team (NTT) to develop a National Intervention Strategy that will address “corrective rape.” The department initiated engagements with other key government departments and institutions to develop the National Task Team. The department established a Rapid Response Team on pending cases relating to gender and sexual orientation-based crimes in the criminal justice system.

In June, the United Nations General Assembly, for the third time, elected South Africa to serve as a non-permanent member of the UN Security Council for 2019-2020. The seat is a chance for President Ramaphosa to restore South Africa’s human rights-based foreign policy and take a leadership role in resolving conflicts throughout Africa.

During its summit in January, the African Union (AU) endorsed the candidature of South Africa for the UNSC, the only country to receive the backing of the regional body. In announcing its bid for the non-permanent seat, the South African government declared its intention to promote an African Agenda of peace and security in the region, and to end armed conflict by 2020.

In November, International Relations Minister Lindiwe Sisulu said she intends to review South Africa’s guidelines on how the country casts its vote in international fora and ensure they are underpinned by South Africa’s values and constitutional principles. She also expressed deep concern about the deteriorating human rights situation in Myanmar. Her spokesperson said South Africa will vote in December in the UN General Assembly for a resolution strongly condemning human rights abuses—including alleged genocide—by the Myanmar military against the Muslim minority Rohingya people—a reversal of its position.

In September, the government indicated it was reviewing its withdrawal from the ICC. Minister Sisulu told media that South Africa may have taken the decision to withdraw from the ICC in a pique of anger, but now felt that, “we are actually better off in the ICC to transform it from inside rather than standing outside and hurling a whole lot of expletives from outside.” The ICC debacle had severely dented South Africa’s international image as a champion of human rights and international justice.

Also in September, the UN Committee on the Rights of Persons with Disabilities, the body of independent experts that monitors implementation of the Convention on the Rights of Persons with Disabilities, noted with concern the high number of children with disabilities who remain out of school and the continuing growth of special schools. It called on South Africa to develop a “comprehensive plan to extend it throughout its territory, where children can stay in their local school, not be removed from their families and live in hostels.” It also called on the government to prepare a time-bound plan of action to address the high levels of physical, sexual, verbal, and emotional abuse, including bullying, in special schools.