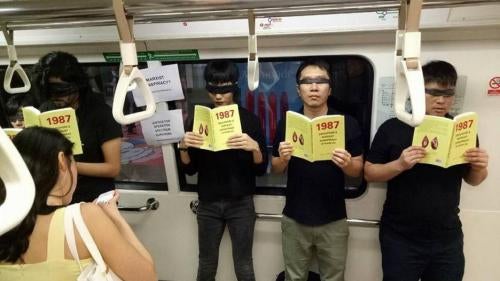 Prime Minister Lee Hsien Loong stated in a June 2018 interview that Singaporeans were free to say or publish whatever they wanted, “subject to the laws of sedition, libel and contempt.” In reality, those laws, along with a range of regulatory measures, impose severe restrictions on the right to freedom of speech inn Singapore. Critics of the courts are targeted for “scandalizing the judiciary” and in April, those critical of a government proposal to pass a law criminalizing “fake news” were subjected to harassment at parliamentary hearings on the subject.

Freedoms of Peaceful Assembly and Expression

The government maintains strict restrictions on the right to peaceful assembly through the Public Order Act, requiring a police permit for any “cause-related” assembly if it is held in a public place, or in a private venue if members of the general public are invited.

The definition of what is treated as an assembly is extremely broad and those who fail to obtain the required permits face criminal charges. Activist Jolovan Wham was prosecuted in 2018 for three counts of violating the Public Order Act for organizing two peaceful protests and a candlelight vigil. On October 3, 2018, performance artist Seelan Palay was convicted of violating the Public Order Act by walking from Hong Lim Park to parliament carrying a piece of art to commemorate the 32 years, since 1989, that Chia Thye Poh was detained under the Internal Security Act. Seelan was sentenced to two weeks in prison after refusing to pay a fine of S$2,500 (US$1,800).

Applications for permits for cause-related assemblies are regularly denied. For example, in April Terry Xu’s application to hold a one-man silent protest against a law recently passed by parliament was denied. The refusal came even though he proposed to hold it late at night on a weekend in the Central Business District. The denial cited the “risk of causing public disorder, as well as damage to property.”

In March 2018, the government passed the Public Order and Safety (Special Powers) Act, which provides Singapore’s home affairs minister with sweeping powers if a “serious incident” has been, is being, or is likely to be committed. While the law purports to be aimed at “serious violence and large-scale public disorder,” illustrations in the law of what may be considered a “serious incident” make clear it can be used against peaceful protesters.

In April 2018, a parliamentary committee held hearings on dealing with “deliberate online falsehoods” and invited several activists and critics of the government to testify. Those who agreed to appear were harangued and asked questions unrelated to the issue of “fake news.” A number of the witnesses who testified subsequently filed complaints stating that the official record of the hearing seriously misrepresented their testimony.

In the same month, the Accounting and Corporate Regulatory Authority (ARCA) refused to permit PJ Thum and Kirsten Han to register a private company to organize discussions and provide editorial services to the website New Naratif, saying that to do so would be “contrary to national interests.” ARCA justified the decision as necessary to prevent foreigners from interfering in Singaporean affairs because the company received funding from the US-based Open Society Foundations.

In May 2018, the government charged activist Jolovan Wham with “scandalizing the judiciary” for posting on Facebook that “Malaysia’s judges are more independent than Singapore’s for cases with political implications.” Authorities also charged John Tan, the vice-chairman of the opposition Singapore Democratic Party, with contempt for commenting on his Facebook page that Wham’s prosecution “only confirms that what [Wham] said is true." On October 9, both were found guilty of contempt of court. They were awaiting sentencing at time of writing.

The Board of Film Censors must pre-approve all films and videos shown in Singapore, and exhibiting unapproved films is a criminal offense. The newly enacted Films (Amendment) Act broadened the law to include films received on a computer monitor or mobile phone and gives sweeping enforcement powers, including the power to conduct warrantless searches, to various individuals tasked with enforcing the law.

In February 2018, Singapore’s parliament once again extended the Criminal Law (Temporary Provisions) Act, which allows detention without trial for up to 12 months if the home affairs minister is satisfied that the person “has been associated with activities of a criminal nature,” and “that it is necessary that the person be detained in the interests of public safety, peace and good order.” There appears to be no limit to the number of times detention can be extended. Singapore also continues to detain individuals without trial under the Internal Security Act. There is little publicly available information about the number of people detained, their identities, or the basis for their detention.

Singapore retains the death penalty, which is mandated for many drug offenses and certain other crimes. However, under provisions introduced in 2012, judges have some discretion to bypass the mandatory penalty and sentence low-level offenders to life in prison and caning. There is little transparency on the timing of executions, which often take place with short notice. Singapore executed seven people in October. At least two other individuals were executed for drug offenses earlier in the year.

Use of corporal punishment is common in Singapore. For medically fit males ages 16 to 50, caning is mandatory as an additional punishment for a range of crimes, including drug trafficking, violent crimes (such as armed robbery), and even some immigration offenses.

The rights of lesbian, gay, bisexual, and transgender (LGBT) people in Singapore are severely restricted. Sexual relations between two male persons remains a criminal offense under criminal code section 377A, and there are no legal protections against discrimination on the basis of sexual orientation or gender identity.

The Media Development Authority effectively prohibits all positive depictions of LGBT lives on television or radio. In April, the movie Love Simon, which is about a teenager coming to terms with his sexuality, was given a rating that precludes viewing by anyone under the age of 21, even though it contains no sexual scenes or violence and is rated PG-13 or PG in most other countries.

In July 2018, the research and advocacy director of the Inter-University LGBT Network, who had been invited to speak about her experience as a young person concerned about LGBT issues at a TEDxYouth event at St. Joseph’s Institute, was informed by event organizers that she would not be permitted to speak due to unspecified Ministry of Education regulations.

In the wake of India’s Supreme Court repealing Section 377 in September, a British colonial-era law that imposed criminal penalties for same-sex relations, a Singaporean disc jockey filed a constitutional challenge to the similarly worded Section 377A, and tens of thousands of people submitted a parallel petition to the government urging its repeal.

Work permits of migrant workers in Singapore are tied to a particular employer, leaving them extremely vulnerable to exploitation. Foreign domestic workers are still excluded from the Employment Act and from many key labor protections, such as limits on daily work hours and mandatory days off. Labor laws also discriminate against foreign workers by barring them from organizing and registering a union or serving as union leaders without explicit government permission.

Singapore is a regional hub for international business and maintains good political and economic relations with both the United States, which considers it a key security ally, and China. Singapore hosted the summit between US President Donald Trump and North Korean leader Kim Jong-Un in June 2018, before which Prime Minister Lee met with President Trump. Singapore was also the chair of the Association of Southeast Asian Nations (ASEAN) in 2018, hosting the 32nd ASEAN summit in April. Singapore’s allies focused their priorities on trade and business, and did not publicly criticize Singapore’s poor human rights record.