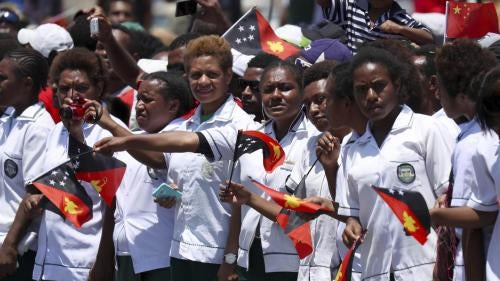 Papua New Guinea (PNG) is a resource-rich country, yet almost 40 percent of the population lives in poverty. Former United Nations High Commissioner for Human Rights Zeid Ra’ad Al Hussein visited PNG in February 2018 and called on the government to tackle a long list of abuses, including corruption, land rights abuses, gender-based violence, and attacks on activists and journalists.

In June, authorities confirmed that the country was facing its first polio outbreak in 18 years, prompting an emergency vaccination campaign.

PNG continues to see high levels of violence and political unrest since the 2017 election, which was marred by widespread electoral irregularities and violence. In June, in the Southern Highlands, a mob set alight a passenger plane in an election-related protest.

Sorcery-related violence continued unabated, with women and girls the primary targets. In May, in the Southern Highlands, one woman was killed and another two seriously injured after a mob attacked the women following accusations they had used sorcery to kill a man. The government’s 2013 Sorcery National Action Plan is inadequately funded and has yet to be implemented.

In December 2017, the PNG government announced A$4 million (US$2.9 million) of funding for sorcery awareness and education programs. In July, the National Court sentenced eight men to death for their involvement in a sorcery-related killing of seven people. PNG continued to impose the death penalty, although authorities have not carried out any executions since 1954.

In 2013, the Family Protection Act was passed, which criminalizes domestic violence and allows victims to obtain protection orders. In 2017, the government passed regulations to implement the law, but enforcement remains weak and inconsistent.

Police and prosecutors rarely pursued investigations or criminal charges against people who commit family violence—even in cases of attempted murder, serious injury, or repeated rape—and instead prefer to resolve such cases through mediation and/or payment of compensation.

There is also a severe lack of services for people requiring assistance after having suffered family violence, such as safe houses, qualified counselors, case management, financial support, or legal aid.

PNG continues to have one of the highest rates of maternal death in the Asia-Pacific, and the number of women and girls who give birth in a health facility or with the help of a skilled birth attendant has reduced in the last five years. Although the PNG government supports universal access to contraception, two out of three women and girls still are unable to access and use it due to geographic, cultural, and economic barriers. Abortion remains illegal in PNG, except in cases where the mother's life is at risk.

The PNG government failed to address abuses by security forces. Few police are ever held to account for beating or torturing criminal suspects, a common occurrence. In September, the government indicated it would introduce new measures to give immunity to police and defense force soldiers on special operations supposedly to “curb lawlessness.”

Despite the ombudsman and police announcing investigations into the 2016 police shooting of eight student protesters in Port Moresby, at time of writing no police had been charged or disciplined and neither body had issued a report.

In July, prison officers shot and killed four men who escaped from Buimo prison in Lae. This followed a similar escape in 2017, in which 17 prisoners were killed. Corrective Services ordered an inquiry in 2017, but at time of writing no investigation had begun, allegedly due to lack of funding.

Police often beat children in lock-ups and house them with adults, despite a child justice law that states children should be kept separate from adults during all stages of the criminal justice process.

In August, a video showing two PNG police officers brutally assaulting a teenage boy in West New Britain was widely circulated on social media. Minister for Police Jelta Wong ordered an immediate investigation and promised to hold those responsible to account. The two officers have reportedly been suspended and charged under the Criminal Code Act, but neither had been prosecuted at time of writing.

Children's access to education improved from 2012 to 2016 following the introduction of the Tuition Fee Free Policy in 2012 but was still low, with only 76 percent of children enrolled in primary school and 33 percent in secondary.

More than 5 million hectares of land has been awarded to PNG-based subsidiaries of foreign companies on Special Agricultural Business Leases, resulting in loss of ancestral land and forest for rural Papua New Guineans. The leases represent over 10 percent of the country’s total landmass and potentially impact more than 700,000 people.

Corruption in PNG is widespread. In December 2017, the Supreme Court quashed a long-standing arrest warrant for corruption against Prime Minister Peter O'Neill, finding that the warrant failed to meet a number of requirements and was issued without jurisdiction.

In April, media reported that anti-corruption police are investigating the Governor of Port Moresby Powes Parkop, after a former official revealed the city council was paying A$1.2 million (approximately US$870,000) a year to a yoga and health company run by his alleged partner.

About 570 male asylum seekers and refugees live in PNG, most on Manus Island. Nearly all were forcibly transferred to PNG by Australia in 2013. Following a 2016 PNG Supreme Court decision that detaining asylum seekers is unconstitutional, in November 2017, the Australian and PNG government closed the main center on Manus and relocated refugees and asylum seekers to other accommodation facilities on the island.

Many asylum seekers and refugees suffer complex health problems including mental health conditions that have been exacerbated by long periods in detention and uncertainty about their futures. In May, a Rohingya refugee died by apparent suicide having jumped from a moving bus, the seventh asylum seeker or refugee to die on Manus Island since 2013. The Australian Department of Home Affairs has acknowledged that medical services have been reduced since the men were forcibly removed from the main center in 2017. There have been urgent calls, including by Australian doctors, to improve healthcare standards on Manus Island.

Australia pays for refugees’ living expenses but refuses to resettle them in Australia, insisting they must settle in PNG or third countries, such as the United States. US resettlement from Manus remains slow, with 163 resettled as of October.

Refugees and asylum seekers do not feel safe on Manus due to a spate of violent attacks by locals in the town of Lorengau and ongoing disputes with the local community. In January, neighboring residents blocked access to living compounds in a protest about leaking sewage. In May, a fire in Hillside Haus forced the relocation of 120 residents. Since June, a 12-hour curfew has been imposed on the refugees and asylum seekers in violation of their freedom of movement, following a car accident in which a woman died; an allegedly drunk refugee was driving the car. In October, a local man violently assaulted an Iranian refugee who was hospitalized with serious injuries to his head and eyes.

In June, following a class action settlement, the Australian government paid A$70 million (approximately US$51million) in compensation to asylum seekers and refugees for their illegal detention on Manus Island.

In July, the Queensland Coroner ruled that the death of Manus detainee and Iranian asylum seeker Hamid Khazaei in September 2014 was preventable and the result of "compounding errors" in health care provided under Australia's offshore immigration detention system.

Despite the existence of a national disability policy, people with disabilities are often unable to participate in community life, go to school, or work because of lack of accessibility, stigma, and other barriers. Access to mental health care is limited, and many people with psychosocial disabilities and their families often consider traditional healers to be the only option.

The PNG criminal code outlaws sex “against the order of nature,” which has been interpreted to apply to consensual same-sex acts, and is punishable by up to 14 years’ imprisonment.

China is set to overtake Australia as the largest donor to PNG, though most assistance is in the form of infrastructure loans rather than aid. China is committing approximately US$4 billion to developing a national road network. Australian government aid to PNG for the year 2018-19 is A$572 million (approximately US$411.3 million).

In November, PNG hosted the annual Asia-Pacific Economic Cooperation (APEC) forum which was overshadowed by growing tensions between China and Australia for regional dominance in the Pacific. China provided significant infrastructure support—including the A$35million (approximately US$25.4 million) convention center—and President Xi Jinping invited Pacific Island leaders to a special summit ahead of APEC.

The PNG government drew criticism for its purchase of 40 new Maserati cars for visiting APEC dignitaries, when the impoverished country struggles to pay teachers and faces a health crisis. The summit ended in disarray when Chinese officials physically forced their way into the office of the PNG foreign minister and refused to sign the final joint statement.