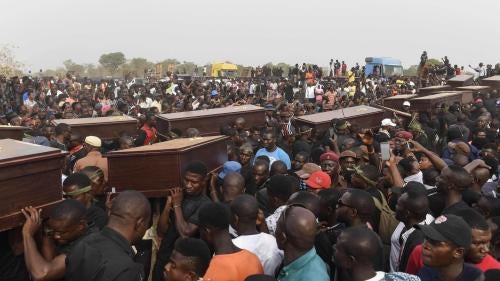 Heightened political tensions ahead of the 2019 elections in which President Muhammadu Buhari is seeking re-election defined Nigeria’s rights landscape in 2018. Despite notable military advances, and apparently premature proclamations of Boko Haram’s defeat by government forces, the group remained a threat to security in the northeast region.

Abductions, suicide bombings, and attacks on civilian targets by Boko Haram persisted. At least 1,200 people died and nearly 200,000 were displaced in the northeast in 2018. In June, at least 84 people were killed in double suicide bomb attacks attributed to Boko Haram at a mosque in Mubi, Adamawa State.

Decades old communal conflict between nomadic herdsmen and farmers in the Middle Belt intensified in 2018 and further exacerbated the security situation in the country. At least 1,600 people were killed and another 300,000 displaced as a result of the violence.

Although Boko Haram’s territorial control shrank to small pockets of villages around Lake Chad as a result of sustained government military action, factions of the insurgency group continued to carry out attacks against civilians in the region.

In February, insurgents abducted 110 schoolgirls from Dapchi, Yobe State, in a style reminiscent of the 2014 abduction of 276 Chibok school girls. One hundred and four of the Dapchi girls were released two weeks later after negotiations with the government. Five of the remaining girls reportedly died in captivity and one girl, Leah Sharibu, continues to be held hostage allegedly for refusing to deny her Christian faith. About 100 of the Chibok schoolgirls remain unaccounted for.

In September and October, Boko Haram insurgents executed Saifura Ahmed and Hauwa Liman, both aid workers with the International Committee of the Red Cross (ICRC). The group kidnapped them in March.

In June, twin suicide bomb attacks and grenade explosions by suspected Boko Haram fighters killed 31 people and injured 48 others during Muslim religious celebrations in Damboa, Borno State. The attack occurred in the wake of Chief of Army Staff Tukur Buratai’s speech encouraging displaced people to return to their communities.

Over 35,000 internally displaced people returned to northeast communities despite security concerns and lack of basic necessities, including food and shelter. Within two months of the return of 25,000 people to Gudumbali Borno State in July, suspected members of Boko Haram’s Islamic State’s West Africa franchise killed eight people and temporarily took control of the town.

Between October 2017 and July 2018, authorities conducted three rounds of trials of over 1,500 Boko Haram suspects in a military base in Kainji Niger State. Some defendants had been in detention since 2009 and the majority faced charges of material and non-violent support to Boko Haram. The trials were fraught with irregularities, including lack of interpreters, inadequate legal defense, lack of prosecutable evidence or witnesses and non-participation of victims.

In August, Vice President Yemi Osinbajo dismissed DSS Director General Lawal Daura for the unauthorized sealing of the National Assembly. The National Human Rights Commission reported that under Daura’s three-year leadership, the agency repeatedly violated rights, including carrying out unlawful arrests, prolonged detention without trial, and torture of detainees. Osinbajo took the action while he was acting president.

Despite court orders, the DSS refused to release a former national security adviser, Sambo Dasuki, as well as the Shia Islamic Movement of Nigeria (IMN) leader, Sheik Ibrahim El Zakzaky and his wife, Ibraheemat, all of whom have been in detention pending trial since 2015.

Police continued their crackdown on protests by members of the Shia IMN and the Indigenous People of Biafra (IPOB) separatist group with arrests and detention. In April, 115 Shia IMN members were arrested in Abuja during a protest for the release of their leader Sheik Zazaky and his wife. Soldiers killed at least 42 more in Abuja during similar protests in October.

On August 17, 112 women were arrested and prosecuted in Owerri, Imo State, for protesting the disappearance of IPOB leader, Nnamdi Kanu. They were discharged and released by a court six days later.

Recurring violence between herdsmen and farmers, as well as related cattle theft and banditry in many northern states, including Zamafara and Kaduna, posed serious threats to peace and security. Although the violence is increasingly described in religious terms, competing claims to land and other resources are at its core.

In June, a typical reprisal attack began after farmers allegedly killed five herdsmen for allegedly trespassing on farms in Plateau state. In apparent retaliation, herdsmen attacked villages in the area, killing 86 and injuring hundreds, including women and children. In September, suspected herdsmen killed 51 people and abducted about 24 others in Numan, Adamawa State.

Uncoordinated and inadequate responses by state and federal authorities deepened mistrust and perception of authorities’ bias and complicity in the violence.

In May, at least 45 people were killed in an attack by bandits in Gwaska village, Kaduna State. Zamfara state was perhaps the worst affected by frequent bandit attacks, who killed at least 400 people and displaced over 38,000 in 2018. In July, the government deployed 1,000 military troops to the state to tackle insecurity.

The Economic and Financial Crimes Commission (EFCC) recorded notable strides in its fight against corruption. In June, serving senator and former governor of Plateau State, Joshua Dariye, was found guilty and sentenced to 14 years’ imprisonment for fraud and misappropriation of the state’s US$3 million ecological fund. The EFCC in May secured the conviction and 14 years’ imprisonment of Jolly Nyame, a former governor of Taraba State, for fraud and misappropriation of over US$4million in state funds.

In May, the Benue State House of Assembly passed the Same Sex Marriage Prohibition (SSMP) Law. Like the federal law adopted in 2014, the law criminalizes public show of same sex amorous relationships, same sex marriages, and the registration of gay clubs, societies, and organizations.

Elsewhere in the country, scores were arrested, detained, and prosecuted based on their real or perceived sexual orientation and gender identity. In June, more than 100 people partying at a hotel in Asaba, Delta State, were arrested on allegations of being gay. In August, 57 people were arrested at a Lagos hotel based on information provided by a vigilance group that the victims had gathered to perform gay initiation rites.

In November, an Abuja Federal High Court dismissed the Lesbian Equality and Empowerment Initiative’s lawsuit challenging its non-registration. The court held that the Corporate Affairs and Allied Matters Act and the Same Sex Marriage Prohibition Act prohibited the registration of groups considered “undesirable, offensive and contrary to public policy.”

Although the Nigerian press remains largely free, several arrests and detention of journalists and activists in 2018 suggest a disturbing trend toward repression of freedom of expression and media.

In August, a social media campaign for the release of Jones Abiri, a journalist and publisher of Weekly Source newspaper forced the DSS to bring him before an Abuja Magistrate court, more than two years after his detention in 2016. The court discharged him of the charges because the prosecution failed to substantiate them.  Another court awarded him $270, 000 in damages for breach of his human rights.

Similarly, an Abuja court conditionally released Premium Times journalist, Samuel Ogundipe, amid protests and campaigns for his freedom. He was arrested and prosecuted by SARS for allegedly refusing to disclose the source for a story about a police inspector general, Ibrahim Idris.

In August, Nigerian Air Force urged the US to expedite delivery of 12 A-29 Super Tucano light attack aircraft worth $496 million. The Trump administration approved the sale in 2017, lifting the freeze imposed by the Obama administration over human rights concerns.  The US also provides training to the Nigerian military, and in June, announced $102 million in humanitarian assistance for people affected by the northeast conflict.

During a visit to Abuja in August, United Kingdom Prime Minister Theresa May signed the first ever security and defense pact between both countries. Under the agreement, the UK will expand provision of protective equipment and training to Nigerian soldiers and deliver a £13 million ($14.7 million) program to educate 100,000 children living in conflict zones. She also unveiled a series of measures to tackle illegal migration and human trafficking in Nigeria, including a new UK and France-led project to strengthen border security and cooperation.

In July, French President Emmanuel Macron pledged to increase cooperation between Nigeria and France to tackle security challenges posed by activities of Boko Haram and ISIS in Nigeria and the Sahel.

During a joint visit to Nigeria in July, the United Nations Office on Counter Terrorism and the Counter Terrorism Executive Directorate pledged continued technical assistance, including support for criminal justice processes that comply with human rights and rule of law, to help Nigeria to counterterrorism.

In September, Germany, Nigeria, Norway and the United Nations co-hosted a high-level conference on the Lake Chad Region in Berlin that raised over $2 billion in support, and $467 million in concessional loans for humanitarian, peacebuilding, and development activities in Cameroon, Chad, Niger, and Nigeria. The European Union also announced the release of €138 million ($157 million) to assist vulnerable communities in the region affected by prolonged violence, insecurity, and environmental degradation.

Nigeria, which currently sits on the UN Human Rights Council, in July abstained from voting on a resolution on the human rights situation in Syria, Venezuela, Yemen, and Burundi; and another resolution urging states to respect and protect basic human rights and civil society space.

In November, under the HRC’s Universal Periodic Review mechanism, states made 290 recommendations to Nigeria, including to combat all forms of discrimination, especially against women and lesbian, gay, bisexual, transgender, and intersex persons; combat impunity; and abolish the death penalty.

The Office of the Prosecutor of the International Criminal Court (ICC) continued its preliminary examination into the situation in Nigeria, with a focus on alleged international crimes committed in the Niger Delta, the Middle-Belt states and in the Boko Haram conflict. The preliminary examination also focuses on the status of national proceedings regarding these crimes.

In August, President Buhari delivered the keynote address at the 20th Anniversary of the ICC’s Rome Statute event at The Hague and used the opportunity to mark Nigeria’s strong support for the ICC’s mandate.

Nigeria, a member of the African Union Peace and Security Council (PSC), in April led the PSC on a South Sudan field mission aimed at fostering peace talks in the nation, which entered its fifth year of armed conflict.

In a letter to President Buhari in March, the African Commission on Human and Peoples’ Rights (ACHPR) declared the government’s proscription of IPOB as a terrorist group and attacks against its members as prima facie violation of the African Charter on Human and People’s Rights. In April, Nigeria’s sixth periodic report on the implementation of the charter was considered at the ACHPR’s 62nd Ordinary Session in Mauritania.

In July, President Buhari was elected chairperson of the Authority of Heads of State and Government of the Economic Community of West African States.