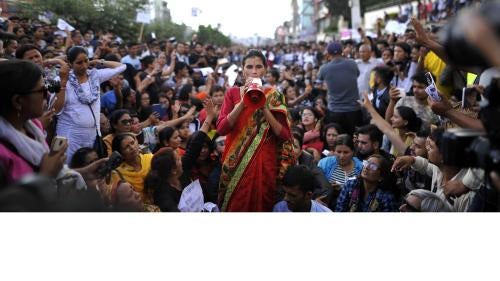 Following local, provincial, and national elections through late 2017, Khadga Prasad Oli of the Unified Marxist-Leninist party was sworn in as Nepal’s new prime minister in February 2018. Oli swiftly combined forces with the Communist Party of Nepal–Maoist to form a majority in parliament. There were ongoing discussions about the devolution of power, including on law enforcement and justice, after a new federal structure was adopted under the 2015 constitution.

The attorney general, appointed by the new prime minister, promised to amend flawed legislation on transitional justice mechanisms to bring them in line with Supreme Court directives and international law.

The Truth and Reconciliation Commission (TRC) and the Commission of Investigation on Enforced Disappeared Persons (CIEDP) held extensive hearings throughout Nepal during 2018, meeting victims of the country’s decade-long conflict between government and Communist Party of Nepal–Maoist (CPN-M) forces. Although the terms of the two commissions were extended in 2018, concerns lingered over their independence and impartiality, particularly with the CPN-M, a vested party in the conflict, joining the ruling party in the new government in early 2018.

Due to flaws in the legislation setting up the transitional justice mechanisms, the international community had withdrawn support for the commissions, beginning in 2014. In June 2018, the attorney general pledged to amend the laws to bring them into compliance with international laws, and in particular to withdraw clauses allowing amnesties for perpetrators credibly accused of war crime violations.

However, the proposed amendments did not properly address concerns around entrenched impunity. Perpetrators who face credible allegations against them continue to remain in positions of power. Over several years, including as recently as 2018, the government held consultations with various groups, including international agencies. However, there had been no progress made at time of writing.

Cases filed before the courts remained stalled as the police and relevant authorities refused to conduct investigations that would enable indictments and prosecutions to proceed. The main political parties continued to insist that these are political cases and should not be handled by regular courts.

Nepal’s two earthquakes in 2015 led to an estimated 9,000 deaths, and the destruction of nearly a million homes across the affected areas. According to a report by the United Nations, most victims have had to rely on money-lenders to rebuild their homes, although the government remains in charge of the over US$4 billion of aid that poured in for victims of earthquake relief. Most victims survived through several monsoons and winters without any proper shelter.

The government replaced the outdated national legal code, known as the Muluki Ain, with a new criminal code that came into effect in August, although implementation laws still must be passed to bring it fully into effect.

Activists and journalists were concerned that certain regressive provisions in the new law criminalize normal news-gathering activities, such as reporting on public figures, including through satire. Even important media houses came under scrutiny and threat. Himal Southasian, a monthly magazine, was forced to relocate its headquarters from Nepal to Sri Lanka in 2018 following threats from the government to shut it down.

Although the constitution recognizes sexual orientation and gender identity as protected through fundamental rights, the criminal code failed to repeat the protection clause, which contradicts the constitution. Additionally, although Nepal has in many ways been at the forefront of protecting the rights of sexual minorities—including by legally recognizing a third gender category based solely on self-identification—the new law only recognizes marriage rights as being between a man and woman.

Nepal continued to send migrant workers to several different destinations. Most Nepali migrant workers are in India, where Nepali citizens can freely travel and work. However, they often remain under the radar due to unofficial migration, which can mean they have little access to legal aid or help from Nepali authorities.

The government continued to report on a steady number of deaths of migrant workers in the Middle East and Southeast Asia, many of whom labor under harsh conditions and without access to proper health care. An August report by the Ministry of Labour, Employment and Social Security stated that, on average, two migrant workers have died every day during the last seven years, primarily, but not exclusively, in the Gulf states.

Although the government has provided some restitution to families of migrant workers who died or suffered severe injury, it has failed to implement its stated policy of providing legal aid to workers accused of crime in host countries.

Failure to properly combat the exorbitant fees charged by migration agencies means that many Nepalis remain in debt.

Many children with mental and physical disabilities study in separate schools or classrooms and do not receive quality inclusive education because schools lack physical accessibility, teachers trained in inclusive education, accessible educational materials, and other supports. In 2017, Nepal adopted the Disability Rights Act and an Inclusive Education Policy, which calls for children with disabilities to study without discrimination in their communities.

Nepal has the third highest rate of child marriage in Asia—37 percent of girls marry before 18, and 10 percent by 15. In 2016, the government launched a national strategy to end child marriage by 2030, but action on operationalizing and implementing the plan has since stalled. A new law in 2017 criminalized chaupadi, a practice that forces menstruating women and girls from their homes into sheds or isolated dark rooms, although it continues in remote areas due to lack of enforcement.

The Nepal government continued talks with India to renegotiate trade and border treaties to prevent blockade on essential goods. In April, China offered infrastructure and development assistance under its One Belt, One Road initiative, including a railway link from Lhasa in Tibet all the way through Nepal to the border with India. While the railway could offer significant opportunities, many in civil society voiced concerns over the impact on communities that would be displaced as a result, and its lack of key human rights safeguards.

Restrictions on free assembly and expression rights for the Tibetan community continued under sustained political pressure from China.

In 2017, Nepal was elected to the UN Human Rights Council for a three-year term, pledging to “contribute to the work of the Human Rights Council for the promotion and protection of human rights and fundamental freedoms in a fair and equitable manner, without distinction of any kind.” However, its voting record since shows that it is squarely voting with its regional block and failing to take a strong stance on important human rights initiatives at the council.