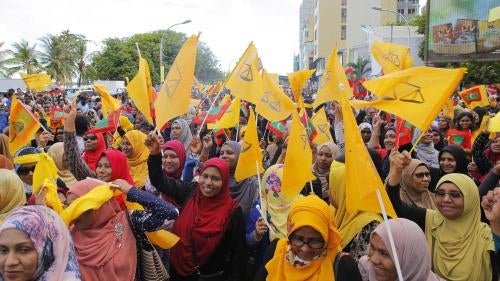 There was hope for improvement in the human rights situation in the Maldives after joint opposition candidate Ibrahim Mohamed Solih defeated then-President Abdulla Yameen Abdul Gayoom by a wide margin in September 2018. Solih took office on November 17 and vowed to implement judicial reform, restore fundamental rights, and investigate the murder of a political activist and the forced disappearance of a prominent journalist.

Solih’s election followed a sharp deterioration in rights protections in the first half of 2018 after the Yameen government imposed a state of emergency for six weeks, arrested two Supreme Court justices, and detained scores of opposition activists under counterterrorism laws. The Yameen government had also expanded its use of an overly broad anti-defamation law, as well as laws aimed at curbing peaceful protests to arrest and intimidate media and government critics. Religious extremists and thugs, some linked to prominent politicians, targeted dissenters and those perceived as deviating from Islamic teachings.

Ahead of presidential elections on September 23, the government blocked opposition candidates from running and severely limited the ability of opposition parties to hold rallies. Although Yameen conceded shortly after his loss, he later challenged the results. In a unanimous ruling on October 21, the Maldives Supreme Court denied his petition to annul the election.

On February 1, 2018, the Supreme Court overturned the convictions of nine members of the opposition, including former President Mohamed Nasheed, who had been sentenced to 13 years in prison on terrorism charges in a 2015 trial widely condemned as unfair. Then-President Yameen denounced the ruling as “illegal,” and on February 5 declared a 15-day state of emergency that was later extended until March 22. The decree suspended constitutional protections, banned public assemblies, and granted security forces sweeping powers to arrest and detain.

Supreme Court Justices Abdulla Saeed and Ali Hameed were arrested, along with former President Maumoon Abdul Gayoom, Yameen’s half-brother; all were convicted of “terrorism” and obstructing justice. The remaining three Supreme Court justices reinstated the convictions of the opposition leaders. Scores of opposition figures and activists were detained during the state of emergency, mostly for alleged “acts of terrorism” despite the fact that protests were overwhelmingly peaceful.

In May, the Election Commission nullified the candidacy of all nominees convicted of a criminal offense within the past three years. Since all senior opposition party leaders were facing spurious terrorism charges at the time, the ruling left only the incumbent president, Yameen, eligible to run. In June, an opposition party alliance agreed to support one candidate who was not facing charges, Ibrahim Mohamed Solih, in his challenge to Yameen.

Before the election, the Election Commission made multiple changes regulating voter registration, including limiting the number of ballot boxes for local workers at tourism resorts, the biggest source of employment in the Maldives, and requiring that civil servants re-register at their workplace. Civil society groups reported that ruling party officials submitted re-registration forms only from their supporters. Police also repeatedly closed opposition party offices, detained their supporters, and seized opposition flags and banners. Human rights groups documented efforts by ruling party officials to manipulate voter registration lists in their favor.

Using the 2016 Anti-Defamation and Freedom of Expression Act, the government in 2018 imposed heavy fines on media that published content critical of the president. After the government declared a state of emergency in February, the regulatory Maldives Broadcasting Commission warned media stations that they could face closure if they were deemed “a threat to national security, incited unrest with false information or endangered the public interest.” After the September elections, parliament repealed the anti-defamation law.

In February 2018, Raajje TV, a popular opposition network, said that it was suspending its regular broadcast “amid continued harassment, threats and intimidations.” Journalists were arrested after anti-government protests in March, and some reported threats by criminal gangs apparently hired by ruling party politicians. Three Raajje TV journalists were arrested after an anti-government protest on March 16.

Extremists that endorse an Islamist ideology, including some gangs linked to prominent politicians, harassed and attacked media and civil society groups. The targets included individuals who criticized the government on social media, published material deemed offensive to Islam, or promoted the rights of lesbian, gay, bisexual, and transgender (LGBT) people.

The Yameen government had made no progress in investigating the abduction of journalist Ahmed Rilwan, who was last seen in August 2014, or the murder of Yameen Rasheed, a blogger and activist who was stabbed to death in April 2017. At a campaign rally on August 7, 2018, Yameen declared that Rilwan was dead—a claim he later retracted. On November 18, President Solih established a commission to investigate both cases, chaired by a former attorney general, Husnu Al Suood.

Gender-based violence is endemic in the Maldives. In January 2018, a women’s rights organization, Uthema, criticized the government for failing to carry out adequate investigations into hundreds of cases of sexual assault. In some cases, the alleged perpetrators included ruling party officials. Maldivian law bans sexual harassment in the workplace, but the law is seldom enforced. In late 2017, civil society groups launched an online social media campaign, #nufoshey (Don’t Harass), to raise awareness about sexual harassment.

Trafficking of Women and Children

The Maldives is both a destination and a source country for women and children subjected to forced labor and sex trafficking. Some women are forced into prostitution after being recruited for domestic labor or the tourism industry. Children are trafficked from outlying islands to the capital, Malé, some of whom are reportedly subjected to sexual abuse and forced labor.

In 2018, the US State Department downgraded the Maldives on its watchlist for human trafficking, citing its failure to take steps to effectively investigate and combat trafficking.

The Maldivian penal code criminalizes adult, consensual same-sex sexual conduct; the punishment can include imprisonment of up to eight years and 100 lashes. Extremist groups in the Maldives have used social media to harass and threaten those who promote the rights of LGBT people.

Social media trolls and thugs, some with links to the ruling party, have threatened human rights defenders because of their work. In January 2018, Shahindha Ismail, the executive director of the Maldivian Democracy Network, received threats on social media after an online news site branded her an apostate for a statement promoting religious freedom.

The February 2018 declaration of a state of emergency was widely condemned internationally. The United Nations high commissioner for human rights, among the first to speak out, described the crackdown as “an all-out assault on democracy.” Following warnings and a strong European Parliament resolution, European Union member states adopted a legal framework for EU sanctions, including travel bans and asset freezes, against individuals and entities responsible for undermining the rule of law, committing human rights violations, or obstructing an inclusive political solution. After the elections, the EU congratulated the Maldives and said the results reflected the commitment of the Maldivian people to democracy.

Ties with India deteriorated after New Delhi criticized the government crackdown on the opposition and the declaration of a state of emergency. After the election, President-elect Solih vowed to restore good relations with India.

In December 2017, China and the Maldives government signed agreements to promote Beijing’s “One Belt, One Road” initiative. Following the election, China called for “continuity and stability” in its relations with the Maldives. During the campaign, Solih had vowed to review all Chinese projects in the Maldives.