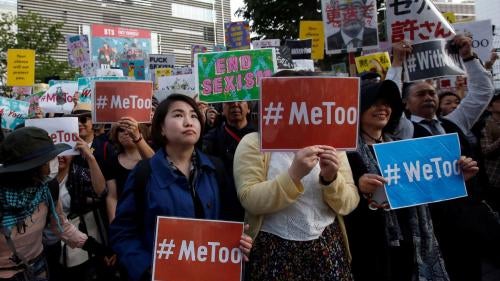 Japan is a liberal democracy with the world’s third largest economy, an established rule of law and a vibrant civil society. In September, the ruling Liberal Democratic Party again chose Shinzo Abe as its leader, putting him on track to be Japan’s longest-serving prime minister.

Japan remains one of only three of the Organisation for Economic Co-operation and Development’s 36 member countries that retain the death penalty. It has no law against racial, ethnic, or religious discrimination, or discrimination based on sexual orientation or gender identity, and accepts an extremely small number of refugees each year. Japan also has no national human rights institutions.

In July, Japan executed by hanging 13 members of Aum Shinrikyo, the group behind the sarin chemical attack in the Tokyo subway in 1995 that killed 13 people and injured thousands. Among those executed was the group’s leader, Shoko Asahara. Anti-death penalty advocates have long raised concerns about death row inmates having inadequate access to legal counsel and being notified of their execution only on the day it takes place.

Persons forcibly sterilized under the Eugenic Protection Act between 1948 and 1996 sued the government for compensation. Under the law, approximately 84,000 persons, mostly with genetic disorders (including at least around 16,500 persons forced to have sterilization surgery), were victimized. In May, a bipartisan committee was established to create a law that is expected to address both compensation and apologies to the victims.

In August, a scandal erupted in major government agencies, including the National Tax Agency and the ministries of justice, foreign affairs, and transport, when officials admitted they had inflated the number of disabled employees they had hired by around 3,700 in an attempt to meet the quota set by the Act on Employment Protection of Persons with Disablities. Prime Minister Abe apologized for the scandal during a parliamentary session in early November.

In May, Japan passed the first national law that encourages political parties to field an equal number of male and female political candidates during elections.

In August, one of Japan’s most prestigious medical universities admitted it had altered female applicants’ entrance exam scores to suppress the number of qualifying women. The university had received billions of yen in government subsidies while the school was discriminating against women, a blow to Prime Minister Abe’s plans to make Japan a country “where women can shine.” In response, the Education Ministry investigated 81 universities, and found other potential cases of discrimination. There is only one comprehensive law in Japan prohibiting sexual discrimination and it applies only to employment.

Over 95 percent of incidents of sexual violence in Japan are not reported to police, according to government figures, partly because discussing rape is perceived to be “embarrassing” in Japan and many victims feel reporting it would not make a difference. In 2017, parliament passed reforms to Japan’s rape law, but it still falls far short of international standards. Rather than focusing on consent, the law requires "violence or intimidation" as a basis for prosecution, except when guardians abuse children in their care.

The Tokyo Municipal Government (TMG) in October passed a LGBT non-discrimination law, which requires the TMG and encourages private organizations such as companies, schools, and private groups to act to address discrimination based on sexual orientation and gender identity.

In doing so, it became the first prefectural level non-discrimination law regarding sexual orientation and gender identity. No such law exists at the national level.

Japan continues to enforce an outdated and discriminatory legal gender recognition law. Transgender people who want to change their legal gender in the family register and on official documents must submit themselves to psychiatric evaluations and diagnosis of “Gender Identity Disorder,” as well as surgeries that sterilize them.

In July, the government notified all relevant local governments to implement the “family-based care” principle of the 2016 Child Welfare Act, which guarantees a family setting, such as adoption and foster care, for children unable to live with their birth parents. Placement in child welfare institutions is limited to cases in which family-based care is “not appropriate,” and even in such cases institutions should provide “the best possible family-like settings.” The government aims to place more than 75 percent of pre-school children needing alternative care into foster care within the next seven years.

Public scrutiny of the child welfare system intensified after reports that a five-year-old girl was abused and killed by her parents in March. In response, the government revealed emergency measures including increasing the number of child welfare officers by approximately 2,000 before 2022.

Japan’s asylum and refugee determination system remains strongly oriented against granting refugee status. In the first half of 2018, the Justice Ministry received 5,586 applications for refugee status largely by people from Asia. The ministry only granted refugee recognition to 22 people, while another 21 asylum seekers were classified as needing humanitarian assistance, allowing them to remain in Japan.

In June, the Tokyo 2020 Organizing Committee declared its commitment to the United Nations Guiding Principles on Business and Human Rights (UNGPs), becoming the first Olympic host to do so. Under the UNGPs, the organizing committee will need to investigate, know and prevent human rights risks, provide remedy, and be transparent about the entire process.

Japan states that it pursues “diplomacy based on the fundamental values of freedom, democracy, basic human rights, and the rule of law.” However, some important diplomatic actions were inconsistent with this commitment.

In June, Japan welcomed Myanmar’s creation of an “independent commission of inquiry” into abuses by Rohingya militants and Myanmar security forces in late 2017. Establishment of the commission, which includes Japanese former diplomat Kenzo Oshima, was widely seen as an attempt by Myanmar to sideline the UN Fact-Finding Mission examination of the same events and deflect attention from the need for a genuinely independent international investigation mechanism.

Unlike other leading democracies, Japan continued its election assistance to Cambodia, despite the Cambodian government’s dissolution of the main opposition party ahead of the July 29 general election, and a severe crackdown on civil society, opposition politicians, and independent media. Japan provided Cambodia ¥800 million (around US$7 million), including funds for Cambodia's biased National Election Committee.

Days before the vote, under increased international pressure not to legitimize a sham election, Tokyo announced it would not deploy an official election observer mission. Unlike several other governments, Japan did not criticize the vote, which left all parliament seats with the ruling party, effectively creating a one-party state.