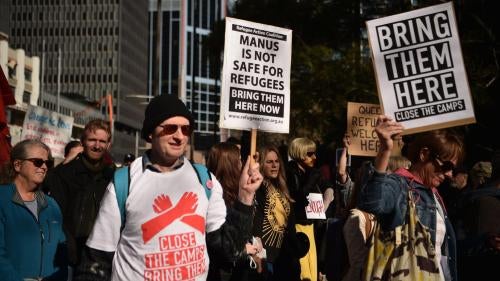 Australia has a strong record of protecting civil and political rights, but serious human rights issues remain. In 2018, the government continued to hold refugees and asylum seekers who arrived by boat in Australian waters on Manus Island in Papua New Guinea and on Nauru, marking more than five years since the reintroduction of its draconian offshore processing and settlement policy.

In October, the Queensland government introduced a human rights act, becoming the third jurisdiction in Australia to do so behind the Australian Capital Territory and Victoria.

At time of writing, 570 refugees and asylum seekers remained in Papua New Guinea and around 600 on Nauru. Countries of origin include Afghanistan, Myanmar, Iran, Pakistan, Somalia, and Sudan.

Many refugees and asylum seekers suffer from poor mental health or mental illness due to, or exacerbated by, years of detention and uncertainty about their futures. Self-harm and suicide attempts are frequent. At least 12 refugees and asylum seekers have died on Manus Island and Nauru since 2013. Two refugees with mental health conditions reportedly committed suicide on Manus and Nauru in 2018.

In October, the Nauruan government ordered Médecins Sans Frontières (MSF) to end its work providing mental healthcare services on Nauru, claiming MSF had “conspired” against it to advance political agendas. MSF described the mental health situation of asylum seekers and refugees on Nauru as “beyond desperate.”

Civil society and medical professionals coordinated a successful campaign in 2018 to draw attention to the plight of refugee children in Nauru and the need to evacuate them. At time of writing, the government, reacting to the change in popular opinion, had relocated more than 100 children from Nauru to Australia between August and November.

But most cases required legal intervention. Australian courts have ordered the government to transfer more than 90 refugees and asylum seekers in poor health from Nauru and Manus to receive medical treatment in Australia.  More than 150 other refugees and asylum seekers have been transferred only after lawyers threatened urgent court proceedings. These cases include children as young as 10 who suffer from acute mental health conditions, some of whom have attempted suicide.

In July, a Queensland inquest found that the death of Iranian asylum seeker Hamid Khazaei on Manus Island in 2014 was preventable.

Progress under the resettlement deal to send some refugees to the United States has been slow, with less than 450 sent to the US at time of writing.

The  hypocrisy of Australia’s professed “non-discriminatory” immigration policy was evident when it was revealed that then-Immigration Minister Peter Dutton intervened to grant tourist visas to foreign nannies on “public interest” grounds in 2015, while his office denied medical transfers to Australia for asylum seekers in offshore detention. In March 2018 Dutton also commented that persecuted white South African farmers deserved “special attention” on humanitarian grounds from a “civilised country” like Australia.

In August the government removed income support and housing from asylum seekers living in Australia, in a move described by UN Special Rapporteur for Extreme Poverty and Human Rights Philip Alston as “ruthless.”

In August, the Guardian reported that more than 407 Aboriginal and Torres Strait Islander people had died in custody since a 1991 royal commission was established to look into the issue.

In April, the Northern Territory government acknowledged the November 2017 royal commission’s finding of “shocking and systemic failures” in the youth justice and protection systems, but claimed it lacked funding to implement all of the commission’s 227 recommendations.

Australian states and territories set the age of criminal responsibility at 10-years-old. Across Australia, around 600 children under the age of 14 are imprisoned each year, mostly Indigenous. In March, the Northern Territory announced support “in principle” for the royal commission recommendation to raise the age from 10 to 12, but at time of writing had yet to implement it. In July, a review of Queensland’s youth justice system also recommended increasing the age to 12.

In April, the inspector of custodial services released a report into conditions at Banksia Hill youth detention center in Western Australia, and found that two boys were “probably” held in solitary confinement in breach of the United Nations Convention against Torture.

In May, former Australian spy “Witness K” and his lawyer were charged with conspiracy to communicate information from the Australian Secret Intelligence Service. Information about the trial is likely to be suppressed, despite strong public interest in knowing the reasons for prosecuting two people who exposed wrongdoing by the Australian government in Timor Leste.

In February, the government introduced an identity-matching services bill that would create a nationwide database of people’s physical characteristics and identities, linking facial images and data from states and territories and integrating them with a facial recognition system. The proposed law lacks adequate safeguards against abuse. The bill had yet to pass into law at time of writing.

In September, the government introduced legislation that would undermine strong encryption and cybersecurity, allowing law enforcement and security agencies to order technology companies and even individuals to facilitate access to encrypted data and devices. The law would give officials wide discretion to decide whether an order is “reasonable and proportionate.”

More than half the Australian prison population has a physical, sensory, psychosocial (mental health), or cognitive disability. In particular, Aboriginal and Torres Strait Islander people are 13 times more likely to be imprisoned than the rest of the Australian population and are more likely to have a disability. People with disabilities struggle to cope in often- overcrowded prisons without adequate access to support services, and are particularly at risk of neglect and abuse.

Human Rights Watch research in 14 prisons across Western Australia and Queensland found that prisoners with disabilities routinely experience bullying, harassment, racism, and physical and sexual violence from fellow prisoners as well as staff. Due to a lack of staff sensitivity and training, prisoners with disability are frequently punished for behavior associated with their disability and end up disproportionately represented in punishment units. Prisoners with psychosocial or cognitive disability can spend weeks, months, or even years locked in solitary confinement for 22 hours or more a day.

In February, the attorney-general announced a national plan to address abuse of older people, a key recommendation of the 2017 Australian Law Reform Commission report that detailed cases of serious physical abuse, financial manipulation, neglect, and exploitation of older people.

In September, the prime minister announced the establishment of a royal commission into care for the aged following numerous reports of abuse in Australian nursing homes.

In June, the Australian government introduced a modern slavery bill that would require companies above a certain size to submit annual statements regarding their supply chains. The bill, however, does not set out penalties for non-compliance.

In 2018, Australia started its term on the UN Human Rights Council, but beyond Geneva continued to shy away from publicly raising concerns about human rights in other countries—including neighboring Cambodia, the Philippines, and Vietnam, where rights violations are rife but with whom Australia works closely on border security and trade. In March, Australia and Vietnam upgraded ties under a new strategic partnership; the joint statement makes no reference to human rights apart from passing mention of the annual rights dialogue.

When Cambodian Prime Minister Hun Sen publicly threatened to beat up protesters in Australia who burned effigies of him in connection with an Association of Southeast Asian Nations (ASEAN) summit in Sydney in March, the Australian prime minister failed to publicly condemn the statement and said little publicly about larger human rights concerns in ASEAN countries.

In October, the government announced targeted sanctions, including travel bans and asset freezes, against five Myanmar military officers involved in atrocities against the Rohingya, following the release of a UN report on Myanmar.

The UN special rapporteur on the situation of human rights defenders released a report on Australia in February 2018 highlighting efforts to undermine the Australian Human Rights Commission, and how activists face “enormous pressure” and vilification from public officials and media outlets.

In July, the UN Committee on the Elimination of Discrimination against Women expressed concern over the rate of gender-based violence against women in Australia, the treatment of asylum seeker and refugee women in offshore detention on Nauru, and the lack of harmonization in state and territory legislation on abortion.

In September, incoming UN High Commissioner for Human Rights Michelle Bachelet referred to Australia’s offshore processing centers as an “affront to the protection of human rights.”