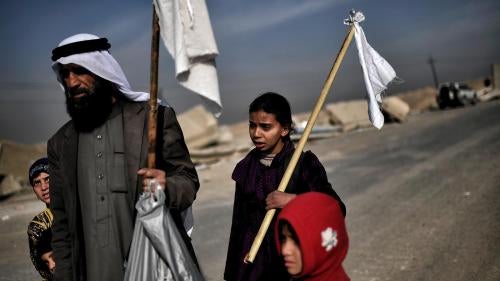 Multinational military operations in Iraq against the Islamic State (also known as ISIS) intensified over 2017, including major operations to retake Mosul and Telafar. Iraqi armed forces, including army, federal police, Popular Mobilization Forces, and Kurdistan Regional Government (KRG) forces, were supported by Iran and the 73-nation Global Coalition against ISIS, led by the United States. Fighting displaced at least 3.2 million Iraqis, over 1 million of them to the Kurdistan Region of Iraq (KRI). ISIS used civilians as human shields, carried out chemical attacks and targeted fleeing civilians, before being defeated in most of Iraq. In their battle against ISIS, Iraqi forces summarily executed, tortured, and forcibly disappeared hundreds of ISIS suspects. Communities in former ISIS-controlled territory took actions of collective punishment against families of suspected ISIS members, displacing them and destroying their property with the complicity of government forces.

Since 2014, mostly Shia armed groups under the authority of a government body known as the Popular Mobilization Forces (the PMF or Hashd al-Sha'abi), have played a significant military and security role in the battle against ISIS. Over 2017, authorities integrated more armed groups made up predominately of other religious groups into the PMF, some with very little formal military training.

On September 25, despite the opposition of the federal Iraqi government and most of the international community, the KRG held a non-binding referendum on independence in the Kurdistan Region of Iraq as well as in disputed territories under KRG de facto control. After the referendum, which passed, the federal Iraqi government issued a set of demands including that Kurdish authorities nullify the results of the referendum and withdraw from Kirkuk, a major city in the disputed territories 85 kilometers south of Erbil, and surrounding military and oil installations. On October 16, a range of Iraqi forces retook parts of the disputed territories some of which had been under de facto KRG control since 2003. In the context of the operations, thousands of Kurdish families fled their homes as Iraqi forces arrived, and some Iraqi forces looted and burned homes in the town of Tuz Khurmatu. 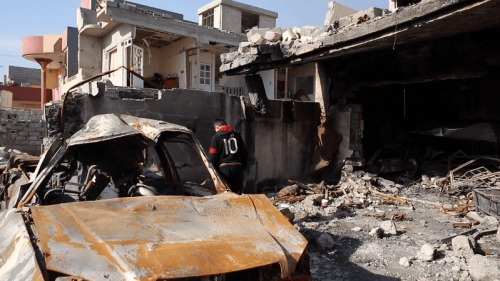 Since 2014, ISIS forces have carried out the most serious human rights abuses, war crimes and crimes against humanity. The UN-mandated Independent International Commission of Inquiry (COI) on abuses in the conflict in neighboring Syria, where ISIS is also active, found that ISIS forces were responsible for acts of genocide. ISIS’s struggle for power since 2011 has been marked by hundreds of suicide and car bombing attacks, killing thousands of civilians, including through the use of child soldiers. In territory under its control in 2017, fighters continued to resort to ill-treatment, including sexual violence, as well as public beheadings and other grotesque killings and acts of torture as a method of governing through fear.

ISIS’s Diwan al-Hisba (Moral Policing Administration) subjected the mostly Sunni populated areas under its control to severe restrictions and punishments, including executions of allegedly gay men, stonings of individuals for alleged adultery, and prohibition on the use of cell phones and cigarettes. It imposed severe restrictions on women and girls’ clothing and freedom of movement. Sunni women and girls have said that they were only allowed to leave their houses dressed in full face veil (niqab) and accompanied by a close male relative. These rules, enforced by beating or fines on male family members or both, isolated women from family, friends, and public life.

ISIS also taxed families living under its control, confiscated property of those that fled, raided banks and stole money, gold and other valuables. ISIS destroyed mosques, shrines, churches, statues, tombs, and other religious and archaeological sites throughout areas under its control, and looted and sold valuable cultural artifacts to help finance its operations. In June 2017, its fighters destroyed the Grand al-Nuri Mosque in Mosul, where its leader Abu Bakr al-Baghdadi declared the caliphate three years earlier. These acts represent war crimes.

In its battles against anti-ISIS forces, the group also has carried out chemical attacks and launched ground-fired munitions into civilian populated areas. Fighters have hidden themselves among civilians in protected objects like hospitals, using civilians as human shields during operations, and firing on civilians trying to flee. In the midst of its battles, ISIS has also carried out mass executions of civilians under its control, leaving many mass graves in its wake.

Iraqi and KRG forces are screening people leaving ISIS-controlled areas in order to arrest ISIS suspects. The screening process relies on official wanted lists or identification by community members. As part of this process, KRG forces have stopped hundreds of families fleeing ISIS-controlled areas, for weeks or even months at a time, citing security concerns about ISIS fighters present among them or their affiliation with ISIS. In many cases they stopped families at checkpoints on the frontlines of fighting, preventing their access to more secure areas and to humanitarian assistance.

The judicial systems of both the federal Iraqi and the KRG authorities are prosecuting thousands of ISIS suspects under their respective counterterrorism legislation, primarily for membership in or providing support to ISIS, as well as for killings and other acts enshrined in counterterrorism legislation. Authorities have made no efforts to solicit victims’ or witnesses’ participation in the trials. 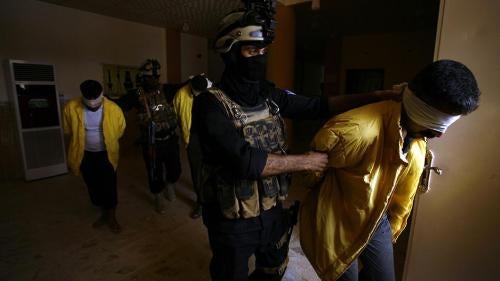 Authorities are detaining ISIS suspects in overcrowded and in some cases inhumane conditions. They are failing to segregate some detained children from adult detainees. Authorities are also systematically violating the due process rights of ISIS suspects, such as guarantees in Iraqi law for detainees to see a judge within 24 hours, to have access to a lawyer throughout interrogations, and to have families notified of their detention and to able to communicate with them. Numerous detainees have alleged that authorities forced them to confess through the use of torture.

ISIS convicts may be entitled to release in federal Iraq under the General Amnesty Law passed in August 2016 (no.27/2016). The law offers amnesty to those who can demonstrate they joined ISIS or another extremist group against their will and did not commit any serious offense before August 2016. According to the Justice Ministry, by February 2017 authorities had released 756 convicts under the Amnesty Law, but it is unclear whether judges are consistently applying this law and the percentage of those convicted for ISIS affiliation among the released. The KRG has not passed any amnesty law, and a KRG spokesperson said none was under consideration. 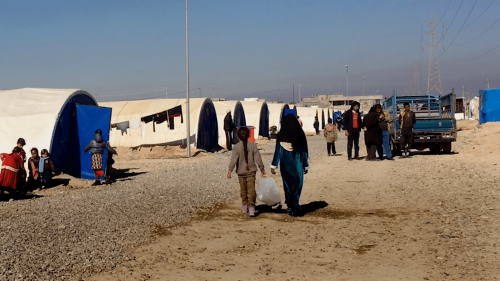 Local officials have forcibly displaced hundreds of families of suspected ISIS-members in Anbar, Babil, Diyala, Salah al-Din, and Nineveh governorates. Iraqi forces have done little to stop these abuses, and in some instances participated in them, moving the families to open-air prison camps. In May, local communities in Nineveh carried out grenade and other attacks on ISIS families, and issued threatening letters and demands to deny the families humanitarian assistance. As a result, many of these families were forced to move to nearby camps housing families displaced by the fighting in Mosul. At the time of writing, Iraqi authorities were detaining around 1,400 foreign women and children who had been in Iraqi custody since they surrendered with ISIS fighters in late August.

The battle against ISIS has afforded Iraqi government and KRG forces the latitude to carry out serious abuses under the guise of fighting terror. For example, during the operations to retake Mosul, Iraqi forces tortured and executed those captured in and around the battlefield with complete impunity, sometimes even after posting photos and videos of the abuses on social media sites.

Iraqi and US-led coalition forces bombarded civilian objects including homes and hospitals in ISIS-held areas. They have fired inherently imprecise ground-fired munitions, including mortars, grad rockets and Improvised Rocket-Assisted Munitions (IRAM), into densely populated civilian areas. In addition, aircraft have dropped explosive weapons with wide-area effects on these areas. By the coalition’s own admission, its aircraft have unintentionally killed at least 624 civilians. Prime Minister al-Abadi said that between 970 and 1,260 civilians were killed during the battle to capture Mosul but provided no details on how those numbers were reached. It is likely that Iraqi and coalition forces have killed many thousands of civilians in the course of their military operations against ISIS.

Iraq has long had one of the highest rates of executions in the world, ranked number four after China, Iran, and Saudi Arabia. Iraqi law permits the death penalty against adults for a range of crimes, including offenses under the counterterrorism law. In the Kurdistan Region of Iraq, the KRG implemented a de facto moratorium on the death penalty in 2008, banning it “except in very few cases which were considered essential,” per a KRG spokesperson.

Currently, federal Iraqi authorities are conducting executions without publicizing any official numbers or sharing this information with international actors. Human Rights Watch is aware of at least 78 executions of individuals convicted of ISIS affiliation. In August, the Higher Judicial Council stated that the Nineveh counterterrorism court had sentenced four ISIS suspects to death, three of whom had been ISIS police and one responsible for recruiting fighters. A judge at the court told Human Rights Watch that the court had issued many more death sentences but could not provide numbers. The expedited nature of the ISIS trials in Nineveh’s court, with the completion in six months of 5,000 conviction hearings now in the sentencing phase, raises the concern that courts will issue many death sentences despite serious due process shortcomings.

The Iraqi criminal code prohibits the use of the death penalty against children. However, Prime Minister al-Abadi stated in September that judges are deciding whether to sentence to death a German girl for communicating with ISIS, a crime under the counterterrorism law.

In 2015, Iraqi officials published a deeply flawed draft domestic violence law, but parliament has yet to pass it or to consider a range of amendments for which women’s rights advocates have been petitioning.

Iraq’s criminal code does not prohibit same-sex intimacy, although article 394 makes it illegal to engage in extra-marital sexual relations.

The US-led Global Coalition against ISIS, including Australia, Belgium, Canada, Denmark, France, the Netherlands, and the United Kingdom, as well as Iranian and Turkish forces, have supported Iraqi and Kurdish troops in the war against ISIS since 2014. The US-led coalition carried out over 24,160 airstrikes on ISIS targets since August 2014.The United States, with 5,000 troops in Iraq, was the largest provider of equipment to the Iraqi military, and Germany the largest provider to the KRG’s Peshmerga forces. In light of the rampant impunity of Iraqi security forces, Human Rights Watch called on foreign governments to end military assistance to units involved in laws of war violations and explain publicly any suspension of military assistance, including the grounds for doing so.