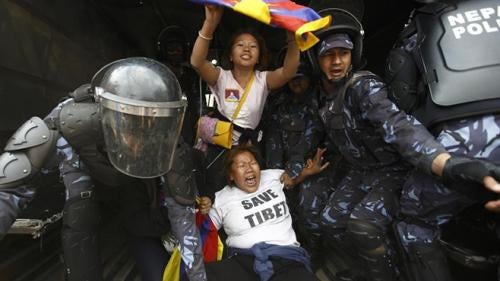 A coalition government led by Nepali Congress leader Sushil Koirala took power in February 2014 after months of political stalemate but did not make much progress on human rights. Pressing concerns include lack of accountability for serious human rights violations and war crimes committed during the 1996-2006 civil war, migrant and refugee rights, and women’s and girls’ rights.

In May, the assembly enacted a law establishing the Commission on Investigation of Disappeared Persons, Truth and Reconciliation to investigate serious rights violations and abuses committed during the civil war, but the law largely replicates a previous version that the Supreme Court struck down as unconstitutional.

Pressure from China has contributed to continuing restrictions on Tibetans in Nepal, including those living in the country and those transiting to India.

The government tried but was unable to press for greater protection of its migrant workers despite reported deaths and injuries, particularly in Qatar.

Nepal has made little progress on justice for serious abuses committed by both sides during its decade-long civil war, in which an estimated 13,000 people died. Efforts to ensure prosecutions in civilian courts for serious human rights and humanitarian law violations during the conflict remain stalled.

In 2014, authorities in the United Kingdom continued to proceed with the prosecution of Nepali army Col. Kumar Lama, charged with committing torture during the civil war, under English laws of universal jurisdiction for that crime. While Nepal has delivered interim monetary and in-kind compensation to the families of those who were “disappeared” or killed during the conflict, other victims, such as victims of sexual violence or torture, have received no compensation from the state.

In January 2014, Nepal’s Supreme Court rejected the Truth and Reconciliation (TRC) Ordinance, ruling that any mechanism for transitional justice must conform to international legal standards. In May 2014, Nepal’s Constituent Assembly passed a new TRC Act, but the law did not address the Supreme Court’s concerns. A public interest litigation challenge to the new law has been filed with the Supreme Court.

In July, the United Nations Office of the High Commissioner on Human Rights issued a technical note pointing out that the TRC Act does not conform to Nepal’s international legal obligations, including because it allows amnesties for serious international crimes. Five experts at the UN Human Rights Council have voiced similar concerns.

Nepal imposes strict restrictions on peaceful protests by Tibetan refugees. Since the 2008 uprising in Tibet, Chinese authorities have pressured Nepal to restrict basic rights. Tibetans in Nepal are forbidden from participating in public celebrations of the Dalai Lama’s birthday or the Tibetan new year. Buddhist religious sites and monasteries are openly under government surveillance.

A 2014 Human Rights Watch report documented limitations on the fundamental freedoms of Tibetans in Nepal. Nepal’s Ministry of Foreign Affairs dismissed the findings, claiming that the report drew on unsubstantiated claims. The ministry did not address Nepal’s de facto ban on political protests by Tibetans, its failure to provide them with official identification documents, sharp restrictions on public activities promoting Tibetan culture and religion, and routine abuses by Nepali security forces including excessive use of force, arbitrary detention, and ill-treatment.

The Nepali economy depends heavily on remittances from Nepali migrant workers abroad, but the government has done little to support and protect such workers.

In 2014, there were reports that hundreds of Nepali and other migrant workers in Qatar had died due to poor working conditions. Migrant workers often live in cramped, unsanitary conditions, and many workers complain of excessive working hours and unpaid wages. The Nepal government took some steps by suspending some unregulated recruiting agencies and calling upon the Qatar government to provide redress and end practices that facilitate trafficking and forced labor, but was unable to ensure effective protection.

Despite promises of reform, Nepal’s citizenship laws leave an estimated 2.1 million people without official status and at risk of statelessness. As a result, many people, particularly women, children born out of wedlock, or children of refugee fathers, are unable to secure drivers’ licenses, passports, bank accounts, or voting rights. The flawed citizenship law makes it particularly difficult for women to secure legal proof of citizenship, especially when male family members refuse to assist them or are unavailable to do so, and it effectively denies citizenship to children of non-Nepali fathers.

Victims of rape and other sexual violence committed by both sides during Nepal’s civil war are excluded from any compensation under the Interim Relief Program. They also have been denied access to justice through regular courts for a variety of reasons, including that Nepali criminal law has an inflexible 35-day statute of limitations on reporting rape. Despite promises by the previous government, Nepal is yet to amend its laws against sexual assault.

In line with its international obligations under the Convention on the Rights of Persons with Disabilities (CRPD), the government has made a commitment to inclusive education, but has failed to effectively implement the policy due to lack of funding, inadequate teacher training, and competing priorities. The enrollment of children with disabilities in primary and secondary education continued to decline in 2014 and an estimated 85 percent of all out-of-school children in Nepal have disabilities.

The international community was less vocal on human rights in Nepal in 2014. In 2013, European Union missions—including those of Denmark, Finland, France, Germany, and the United Kingdom—and the EU delegation, joined by Norway and Switzerland, had issued a statement calling for credible and independent mechanisms to address war-era violations, emphasizing that there should be no amnesty for serious human rights abuses.

However, in 2014 there were no public statements from the EU despite Nepal’s announcement of a flawed commission. Instead, some countries suggested they might fund some part of the commission, although they retreated from this position after the OHCHR issued a technical note pointing out the shortcomings. Donors have yet to publicly state that they will refrain from supporting any process that violates Nepal’s international legal obligations.

The US continued to play the primary role in Tibetan refugee protection issues. The US and other countries have also provided third country settlement to tens of thousands of Bhutanese refugees from Nepal.

During an official state visit, the newly elected prime minister of India, Narendra Modi, committed to providing assistance for development projects and pressed the government to complete drafting a new constitution, but made no mention of conflict-era accountability.