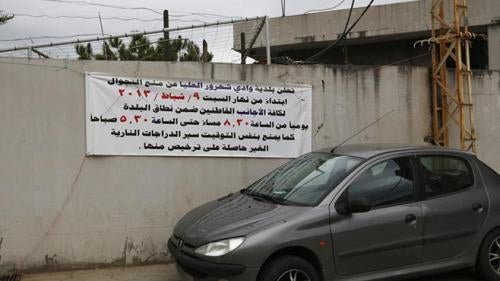 The security situation in Lebanon deteriorated in 2014. Violence spilled over from the conflict in Syria and democratic institutions faltered as the parliament failed to elect a president. Parliamentary elections, planned initially for June 2013 and then November 2014, were postponed again until 2017.

Syrian refugees in Lebanon topped 1,143,000 in November and suffered from increasing abuses including locally-imposed curfews, evictions, and violence by non-state actors with little reaction from Lebanese authorities. With limited international support, the government struggled to meet the refugees’ needs. Draft laws to stop torture and improve the treatment of migrant domestic workers stalled, but in a breakthrough for women’s rights, a law to protect women from domestic violence passed in April.

In 2014, there were multiple shelling attacks from Syria into north Lebanon and the Bekaa Valley, which killed at least 10 civilians and injured at least 19.

There were 14 car bombings or suicide bomb attacks, at least five targeting civilians. Of the 12 attacks, three took place in the Shia Beirut suburbs and three in the Shia town of Hermel in the Bekaa Valley killing 32 people and injuring at least 332. The extremist group Islamic State, also known as ISIS, claimed responsibility for one of these attacks, Jabhat al-Nusra for four, and the Abdullah Azzam Brigade, an Al-Qaeda-affiliate, one. In five other bombings security personnel or Hezbollah officials appeared to be the targets of bombings. These attacks killed 11 people, including five soldiers and a Hezbollah official, and injured 50.

Lebanese residents of Arsal and Syrians residing there reported that Lebanese soldiers refused to allow Syrians to flee from the town during the fighting and that refugee settlements and other civilian targets were subject to indiscriminate fire including by the Lebanese army. A field hospital in Arsal reported that 489 people were wounded and at least 59 civilians—44 Syrians and 15 Arsal natives—were killed in the fighting.

The hostage taking of Lebanese soldiers and Internal Security Force members led to a string of retaliatory measures against Syrians in the weeks that followed, including the imposition of blanket curfews by municipalities across the country, forced evictions, and violence by non-state actors. By September, at least 40 municipalities had imposed curfews affecting Syrians. Lebanese security forces also conducted arrest operations, sometimes targeting refugee settlements, and in some cases reportedly abused or arbitrarily detained Syrians.

By November, over 1,143,000 Syrian refugees in Lebanon had approached United Nations High Commissioner for Refugees (UNHCR) for registration. Registration does not grant legal status, but enables Syrians in some cases to receive assistance. Syrians who enter at official border crossings are granted a six-month residency permit with a one-time possibility of renewal, after which extension requires a US$200 renewal fee. Absent legal status, refugees face the risk of detention for illegal presence in the country.

The Lebanese government began implementing measures in 2014 to reduce the number of Syrians in the country. On October 23, the Lebanese cabinet decided to prevent Syrian refugees from entering Lebanon except in “extreme humanitarian cases,” but did not define what constitutes such a case. According to refugees and aid workers, General Security officers at the border seemed to be implementing their own interpretation of the government’s recent announcement and making arbitrary and discriminatory entry determinations.

In the northern city of Tripoli, there were two weeks of deadly violence between armed groups in March in which at least 30 people were killed and 175 wounded, including 33 soldiers. The fighting was most concentrated in the mainly Alawite neighborhood of Jabal Mohsen and the adjacent Sunni neighborhood of Bab al-Tabbaneh.

On April 1, the army implemented a security plan to arrest militants and seize weapons in Jabal Mohsen and Bab al-Tabbaneh. Some local militia leaders and fighters were detained, some of whom are still in detention, but many militia members and leaders remained at large and on August 5-6 clashes resumed as the army withdrew its forces from Bab al-Tabbaneh. An 8-year-old girl was killed in these clashes.

In September, clashes resumed between the army and gunmen and continued into October resulting in casualties on both side and from the residential population.

In 2014, Lebanese security forces arrested and pursued investigations in relation to car bombings and other attacks on civilians in Lebanon. Some of these suspects, like those detained in relation to clashes that took place in Saida in June 2013 between the army and supporters of pro-Syrian opposition Imam Sheikh Ahmed al-Assir, have suffered from lengthy pretrial detention and have reported being beaten and tortured by security forces.

Lebanon has not yet established a national preventive mechanism to visit and monitor places of detention, as required under the Optional Protocol to the Convention against Torture, which it ratified in 2008. In its annual report, released in October, the United Nations Committee Against Torture found that "torture in Lebanon is a pervasive practice that is routinely used by the armed forces and law enforcement agencies…”

In 2014, charges and prosecutions against news outlets, journalists, and bloggers threatened freedom of expression. Defaming or criticizing the Lebanese president or army is considered a criminal offense in Lebanon, which can carry a jail sentence. The publications court on February 12 sentenced Jean Assy, a blogger, to two months in jail for defaming and insulting President Michel Sleiman on Twitter.

Ambiguous definitions of defamation and slander open the door for silencing legitimate criticism of public officials. The Internal Security Forces Cybercrimes Bureau brought blogger Imad Bazzi in for questioning on defamation charges on March 13 over his criticism of former State Minister Panos Mangyan for abuse of power.

On February 26, the publications court fined Mohammed Nazzal, an Al Akhbar journalist, 27 million LBP (US$18,000) for an article on judicial corruption. Rasha Abou Zaki, an Al Akhbar contributor, was fined 4 million LBP ($2,667) by the publications court in February for defaming former Prime Minister Fouad Siniora, after she alleged corruption and embezzlement in the Finance Ministry.

Migrant domestic workers are excluded from the labor law and subject to restrictive immigration rules based on the kafala system, the visa sponsorship system that ties workers to their employers and puts workers at risk of exploitation and abuse. In June, a judge ruled in favor of a female migrant domestic worker who was suing her employer for withholding her passport, finding that the practice was discriminatory and an unlawful infringement on her freedom of movement.

Migrant domestic workers suing their employers for abuse continue, however, to face legal obstacles and risk imprisonment and deportation due to the restrictive visa system. From May 2014, and perhaps earlier, Lebanon began denying residency permit renewals for a number of Lebanon-born children of low-wage migrants and their parents and expelling them.

On April 1, parliament passed the Law on the Protection of Women and Family from Domestic Violence. The new law establishes important protection measures and related policing and court reforms, but leaves women at risk of marital rape and other abuse. One month after the law’s implementation, four protection orders were issued based on the law.

In September, a landmark verdict was issued by a judge who ordered the permanent eviction of a woman’s husband, son, and daughter-in-law from their house after it was established they had abused her. Under the 15 various Lebanese personal status laws, which are determined by an individual’s religious affiliation, women continue to suffer from discrimination including unequal access to divorce and child custody. Lebanese women, unlike Lebanese men, cannot pass on their nationality to foreign husbands and children, and continue to be subject to discriminatory inheritance laws.

In October 2012, Justice Minister Shakib Qortbawi put forward a draft decree to the cabinet to establish a national commission to investigate the fate of Lebanese and other nationals who “disappeared” during and after the 1975- 1990 Lebanese civil war. The cabinet formed a ministerial committee to examine the draft, but no further action was taken in 2014.

On March 4, Lebanon's State Council ruled that relatives of people who have disappeared in Lebanon have the right to know what happened to their missing family members. On September 20, the families of the disappeared were provided with a copy of the government’s investigation file after the judiciary requested in May to postpone the delivery of the file on the grounds that it might endanger civil peace.

In January, the UN’s Special Tribunal for Lebanon inabsentia trial began against four indicted members of Hezbollah for the killing of former Prime Minister Rafik Hariri in 2005. A fifth suspect, indicted in 2013, was added to the trial in February.

Syria, Iran, and Saudi Arabia maintain a strong influence on Lebanese politics through local allies, and increasingly so as Lebanon becomes more involved in the conflict in Syria.

Many countries have given extensive, albeit insufficient, support to help Lebanon cope with the Syrian refugee crisis and to bolster security amidst spillover violence.

The Lebanese armed forces and Internal Security Forces also receive assistance from a range of international donors including the United States, the United Kingdom, and the European Union, all of which have taken some steps to improve the compliance of these forces with international human rights law.