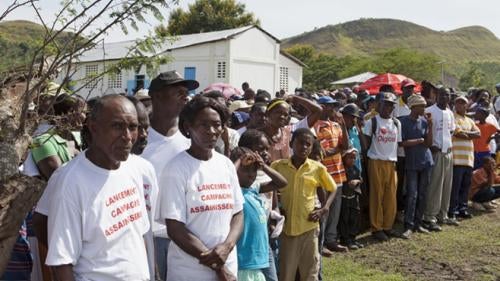 The Haitian government and international community made limited progress in 2014 to address the devastating impact of recent natural disasters and a deadly cholera epidemic. Political stalemates, resource constraints, and weak government institutions continued to hinder the Haitian government’s efforts to meet the basic needs of its people and address long-standing human rights problems, such as violence against women and inhumane prison conditions.

For the fourth consecutive year, Haiti failed to hold constitutionally mandated elections, leading to a deteriorating political environment. The terms of another one third of the Senate and a number of deputies were due to end in early 2015, leaving almost all elected national and local positions in Haiti (with the exception of a remaining one third of senators and the president) open or filled by appointees.

As of June, 103,565 internally displaced persons (IDPs) were living in camps established in the aftermath of the 2010 earthquake, according the International Organization for Migration, down more than 90 percent since 2010. The United Nations estimates that some 70,000 of the remaining IDPs have no prospect of a durable solution.

The cholera epidemic has claimed more than 8,500 lives and infected over 700,000 people in four years. Nevertheless, 2014 marked a significant decrease in the number of suspected cases and a dramatic reduction in deaths, down to 51 deaths for the year as of September, compared to over 4,100 deaths in the first three months of 2010.

The weak capacity of the Haitian National Police (HNP) contributes to overall insecurity in the country. While the government and the United Nations Stablization Mission in Haiti (MINUSTAH), the UN peacekeeping operation in the country, have made police reform a priority, there have been difficulties training sufficient numbers of entry-level cadets. The latest report of the UN secretary-general on MINUSTAH estimated the police-to-population ratio by the end of 2014 would likely be half the minimum recommended number.

Former President Jean-Claude Duvalier returned to Haiti in January 2011 after nearly 25 years in exile. He was charged with financial and human rights crimes allegedly committed during his 15-year tenure as president. From 1971 to 1986, Duvalier commanded a network of security forces that committed serious human rights violations, including arbitrary detentions, torture, disappearances, summary executions, and forced exile.

In 2012, the investigating judge in the case found, contrary to international standards, that the statute of limitations prevented prosecuting Duvalier for his human rights crimes. An appellate court heard testimony in a challenge to the ruling in 2013, with Duvalier appearing in court and answering questions posed by the court and victims’ attorneys. In a historic ruling on February 20, the Port-of-Prince Court of Appeal found that the statute of limitations cannot be applied to crimes against humanity and ordered additional investigation into charges against Duvalier. However, Duvalier died on October 4 without having been brought to trial for his crimes. At time of writing, a reopened investigation into crimes committed by Duvalier’s collaborators was still pending.

Gender-based violence is a widespread problem. A draft law on combatting violence against women that would bring Haiti’s criminal code in line with international standards has been discussed among members of parliament, but not officially introduced for debate.

A council of advisers to the president was reviewing two pending draft revisions to Haiti’s criminal code that include acts of gender-based violence, such as rape and sexual assault, not currently in the code, with the expectation that a conciliated version would be presented to parliament in early 2015.

Use of child domestic workers—known as restavèks—continues. Restavèks, the majority of whom are girls, are sent from low-income households to live with wealthier families in the hope that they will be schooled and cared for in exchange for performing light chores.

Though difficult to calculate, some estimates suggest that 225,000 children work as restavèks.These children are often unpaid, denied education, and physically or sexually abused. Haiti’s labor code does not set a minimum age for work in domestic services, though the minimum age for work in industrial, agricultural, and commercial enterprises is 15. Most of Haiti’s trafficking cases are restavèks. In May, Haiti passed legislation outlawing many forms of trafficking, including hosting a child for the purpose of exploitation.

Human rights defenders continue to face threats of violence. Malya Vilard Apolon, co-founder of Komisyon Fanm Viktim Pou Viktim (KOFAVIV), a women’s rights organization, left Haiti in March after repeated death threats, harassment, and the poisoning of her family dogs. Marie Eramithe Delva, KOFAVIV’s other co-founder, reported to police in May that she received death threats by text message from a woman in police custody, and provided screenshots of the threats and phone number. To her knowledge, there was no further investigation into her claims and she received no protection from police, prompting her also to leave Haiti in June.

In February, Daniel Dorsinvil, the general coordinator for the Platform of Haitian Human Rights Organizations (POHDH), and his wife Girldy Lareche were killed while walking in a Port-au-Prince neighborhood near the POHDH offices. In the days after the murders, government officials claimed that the crime occurred during an armed robbery and was unrelated to Dorsinvil’s human rights activities or criticism of the government. This claim was not substantiated by a thorough investigation, according to local civil society representatives.

Pierre Espérance, executive director of the Réseau National de Défense des Droits Humains (RNDDH), received a death threat in April accusing him of reporting false human rights claims in an effort to destabilize the government. The handwritten threat also included a bullet and stated “this time you won’t escape,” referring to an incident in 1999 when Espérance was shot but survived.

The UN mission, MINUSTAH, has been in Haiti since 2004 and has contributed to efforts to improve public security, protect vulnerable groups, and strengthen the country’s democratic institutions. The UN Security Council extended MINUSTAH's mandate through October 15, 2015.

There is mounting evidence that the cholera epidemic that began in October 2010 is likely to have been introduced by UN peacekeepers. A member of the UN’s Panel of Experts on the outbreak, stated that “the most likely source of the introduction of cholera into Haiti was someone infected with the Nepal strain of cholera and associated with the United Nations Mirebalais camp.”

Responding to the UN’s dismissal of claims for compensation from 5,000 victims of the epidemic, the victims’ representative, the Institute for Justice and Democracy in Haiti and the Bureau des Avocats Internationaux filed a lawsuit before a US court. At time of writing, a motion to dismiss was pending. To date, there has been no independent adjudication of the facts surrounding the introduction of cholera and the UN’s involvement.

According to figures from the UN Office of Internal Oversight Services, at least 93 allegations of sexual abuse or exploitation have been made against MINUSTAH personnel in the last eight years, including 11 in 2014, as of September 30.

In February, the UN independent expert on Haiti, Gustavo Gallón, called for “shock treatment” to significantly reduce the number of persons in pretrial detention.

In May, the Inter-American Commission on Human Rights called on all Organization of American States (OAS) member states to make their archives and official files on the human rights abuses committed under Duvalier open for use as evidence in the investigation. It was unknown whether OAS member states had complied with the commission’s request.