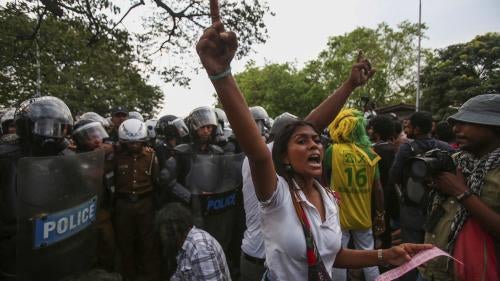 An economic crisis caused acute shortages of essential goods including fuel and medicines, electricity cuts, spiraling price inflation, and desperate hardship for millions of people, jeopardizing their rights to health, education, and an adequate standard of living. Women and girls were particularly affected.

The crisis sparked several months of widespread protests against the government of President Gotabaya Rajapaksa, alleging misgovernance and corruption and calling for his removal from office. In July, after protesters overran the president’s official residence and other government buildings, Rajapaksa fled the country and resigned. He was replaced by his party’s nominee, Ranil Wickremesinghe, who had previously been prime minister several times.

Wickremesinghe launched a crackdown on dissent, using the security forces to attack and disperse peaceful protesters, carrying out dozens of arrests including under the draconian Prevention of Terrorism Act.

Both the Rajapaksa and Wickremesinghe administrations blocked efforts at accountability for violations committed during and after Sri Lanka’s civil war. The victims of past abuses, as well as human rights defenders and other civil society activists, faced harassment, intimidation, and surveillance by state security agencies.

The government opposed efforts to advance accountability for violations of international law committed during and after Sri Lanka’s civil war, from 1983 to 2009, between the government and the separatist Liberation Tigers of Tamil Elam (LTTE).

Former President Gotabaya Rajapaksa had pursued policies that are hostile to the Tamil and Muslim communities, while using the security forces to intimidate and suppress human rights activists and the families of victims of enforced disappearance. In August, Mothers of the Disappeared, a group campaigning to know the fate of missing loved ones, marked 2,000 days of continuous activism. Wickremesinghe took office pledging to uphold rights but refused to join efforts of the United Nations Human Rights Council to advance accountability.

The UN high commissioner for human rights, in her September 2022 report, found that the Sri Lankan government “had still not presented a credible new roadmap on transitional justice.... Instead, accountability processes for past crimes were obstructed, perpetrators granted Presidential pardon and the Office on Missing Persons and the Office for Reparations … have failed to achieve the tangible results expected by victims and other stakeholders.”

On October 6, the Human Rights Council adopted a resolution extending the mandate of a UN project to collect and analyze evidence of conflict-era violations for use in future prosecutions, and mandating enhanced UN monitoring of the rights situation.

Sri Lanka had high levels of public debt and, especially following tax cuts introduced by the Rajapaksa administration in 2019, one of the lowest levels of taxation in the world. Dwindling foreign reserves led to difficulties financing essential imports, including fuel, food, and medicine. In May, Sri Lanka defaulted on its foreign debts, accelerating an economic crisis that disastrously impacted living standards. In June, the United Nations warned that 5.7 million people “require immediate humanitarian assistance.”

Sri Lanka’s principal social protection program, Samurdhi, purports to make cash payments to very low-income households. The World Bank reported in 2021 that “less than half of the poor were beneficiaries of Samurdhi, and benefit amounts remain largely inadequate.”

The Rajapaksa administration repeatedly acted to block financial transparency and accountability for alleged corruption by weakening independent institutions and by intervening to prevent investigations and prosecutions in high-profile cases. Numerous prominent corruption cases were withdrawn or dismissed by the courts.

A 2020 amendment to the constitution had undermined the independence of institutions responsible for defending human rights and the rule of law, including the judiciary, the Human Rights Commission, the National Audit Office, and the Commission to Investigate Allegations of Bribery or Corruption. Although Wickremesinghe promulgated a further amendment, these measures fell short of reversing those changes.

On September 1, Sri Lanka agreed to a bailout plan with the International Monetary Fund (IMF). According to the IMF, the proposed program will include measures to increase social protection coverage and address corruption. However, the detailed contents of the proposed program had not been published at time of writing, and it cannot be implemented until a debt restructuring agreement is reached with Sri Lanka’s international creditors.

The widespread economic hardship generated a protest movement in which large numbers of people from all walks of life participated. Protesters raised a wide variety of demands, including accountability for human rights abuses. The most prominent demands included that President Rajapaksa should resign, and that a new government should adopt constitutional reforms and address corruption.

For several months, protesters occupied a site outside the presidential secretariat in central Colombo, and at the height of the protests in July they briefly occupied the secretariat and the official residences of the president and prime minister.

President Gotabaya Rajapaksa declared a state of emergency on April 1, then imposed a 36-hour curfew and blocked social media in an attempt to curb protests. The state of emergency lasted five days. On several occasions, police used unnecessary or excessive force, including on April 19, when they fired on protesters in Rambukkana, near Kandy in central Sri Lanka. One person was killed and at least 14 wounded.

On May 6, the government reimposed a state of emergency. On May 9, government supporters attacked peaceful anti-government protest sites in Colombo. Following the attack there were numerous violent incidents in Colombo and elsewhere, including clashes between government supporters and anti-government protesters, and attacks on the property of ruling party politicians. Over 150 people were injured and at least five died in different incidents. Prime Minister Mahinda Rajapaksa resigned the same day, and the president appointed Ranil Wickremesinghe to replace him three days later.

On July 9, protesters overran the president’s official residence in Colombo. President Gotabaya Rajapaksa fled the country that evening, and later resigned. Ranil Wickremesinghe became acting president and was later elected president by members of parliament and inaugurated on July 21.

On July 18, Wickremesinghe proclaimed a third state of emergency, and on July 21 issued an order to “call out with effect from July 22, 2022, all the members of the Armed Forces .... for the maintenance of public order.” In the early hours of July 22, Sri Lankan security forces forcibly dispersed people at a peaceful protest site and assaulted protesters in central Colombo, injuring more than 50 people and arresting at least 9 others. .... for the maintenance of public order.”

The authorities continued to target civil society groups, including human rights defenders and the families of victims of past violations. The UN high commissioner for human rights reported that activists are “regularly visited in their offices or homes or called by the police for inquiries,” while in the north and east, “[o]rganisations report being unable to work without surveillance” and must “get approval from the [government] district secretariat for any activity.”

Following years of campaigning by Sri Lankan activists, as well as diplomatic pressure from the European Union and others, the government amended the Prevention of Terrorism Act in March. Since its introduction as a “temporary” measure in 1979, the law has been used to enable abuses including torture and prolonged arbitrary detention, targeting minorities in particular.

Even as amended, the law still allows the government to detain anyone for up to a year without charge, without producing any evidence, and without the possibility of bail. The amendments do not provide meaningful safeguards against torture, instead encouraging it by allowing convictions based on confessions to a police officer. Following the amendment, the law still does not meet any of the five “necessary prerequisites” set out in December 2021 by seven UN human rights experts for meeting Sri Lanka’s international human rights obligations.

Despite promising to observe a moratorium on the use of the law, authorities in August detained three student activists who participated in a demonstration under the PTA. The government said it would replace the law but failed to hold consultations to ensure a rights-respecting framework.

The Muslim Marriage and Divorce Act (MMDA), which governs marriage in the Muslim community, contains numerous provisions that violate the rights of Muslim women and girls, including by allowing child marriage without setting any minimum age. The act stipulates that only men can be judges of the Qazi (family) court, makes it easier for men than for women to obtain a divorce, and does not require a woman or girl’s consent to be recorded before the registration of her marriage. Furthermore, the penal code permits what would otherwise constitute statutory rape, in cases of child marriage that are permitted under the MMDA, by providing that a man having sexual relations with a girl under the age of 16 years commits rape unless she is above the age of 12 and is his wife.

For decades, campaigners have called for the MMDA to be amended. In 2021, the cabinet approved reforms to the act that Muslim women’s rights activists welcomed. However, they were not presented to parliament and the process appeared to have been derailed.

Sri Lanka has among the most restrictive abortion laws in the world, imposing long prison sentences for all abortions with exceptions only for saving a woman’s life. On March 8, 2022, then-Justice Minister Ali Sabry called for parliament to consider legalizing abortion in cases of rape. However, the government failed to bring new legislation.

The penal code prohibits “carnal intercourse against the order of nature” and “any act of gross indecency.” These provisions are widely understood to criminalize consensual same-sex activity.  Another provision, which prohibits “cheating by personation,” is used by police to target transgender people, while the 1841 Vagrants Ordinance contains overbroad and vague provisions that are used to target transgender women and women suspected to be sex workers.

The states of emergency that were repeatedly imposed during 2022 included provisions to increase the criminal penalties imposed for violating these laws. In March, the UN Committee on the Elimination of Discrimination against Women issued a decision calling for decriminalization of consensual same-sex relations.

The rivalry between China and other powers to assert strategic influence in the region partly forms the context for Sri Lanka’s international relations. Key actors include India, the United States, and Japan, which along with Australia are members of the Quadrilateral Security Dialogue, known as the Quad, aimed at countering China. Economic assistance provided to Sri Lanka has partly been viewed by states through the lens of this rivalry.

On September 1, Sri Lanka reached a staff-level agreement with the International Monetary Fund. However, it cannot be implemented until a debt restructuring agreement is reached with foreign creditors. Private investors hold around half of Sri Lanka’s debt, while major bilateral creditors include China, Japan, and India. The debt negotiations are therefore complicated by strategic considerations. USAID Administrator Samantha Power traveled to Sri Lanka in September and noted US concerns about governance regarding obtaining IMF resources. She called on Sri Lankan authorities to implement reforms to “enlist the trust and confidence of Sri Lankans who are waiting to see the change that they feel they were promised.”

The European Union is an important trading partner that has leverage over Sri Lanka through its GSP+ program, which grants the country tariff-free access to the EU market in exchange for Sri Lanka’s obligation to comply with human rights and labor rights conventions. The EU urged Sri Lanka to replace the PTA, and to meanwhile reduce its use and release PTA prisoners detained without charges. Throughout the protests, the EU delivered humanitarian assistance and urged authorities to respect human rights and undertake structural reforms.  to respect human rights and undertake structural reforms.

The UN Human Rights Council resolution on Sri Lanka was led by a core group including the United Kingdom, United States, Canada, Germany, and Malawi.